Here’s what to expect from OPPO’s new ColorOS 11

Following the initial rollout of Android 11 to Google’s Pixel devices, Oppo has now lifted the lid on its own operating system, ColorOS 11. As one of the first OEM’s to bring the latest Android 11 update to its users, Oppo is moving fast to ensure a total of 28 phones receive the huge update in a phase released.

ColorOS 11 will be rolling out after its current beta launch, covering more than 28 models across Oppo’s Find, Reno and A series. And the first to benefit will be users of the new Find X2 series, which includes our current favourite the Find X2 Pro and the entry-level Find X2 Lite.

A “Make Life Flow” concept will seek to make ColorOS a seamless integration, maintaining the best of Android’s stock features and delicately lifting them with customisation-focused UI focused on imagination and individuality.

Users will be able to create their own Always-On Display, theme, and wallpaper, as well as fonts, icons and ringtones. This will make an Oppo phone more flexible than ever before, bringing in a bunch of nuance which will extend to other aspects of the phone such as Dark Mode, with three colour schemes and levels of contrast, and a new and richer version of Oppo’s brilliant wellness app, Oppo Relax 2.0 that lets users create their own white noise mix.

“ColorOS 11’s focus on UI customisation is rooted in the customer’s desire for a more personalised and unique phone experience”, said OPPO Australia Managing Director, Michael Tran. “The ColorOS team has heeded the user feedback for greater UI customisation, offering a more personalised UI that encompasses a wide range of features. In doing so, we are providing users with ample space to demonstrate their creativity and exercise control over their handsets.” 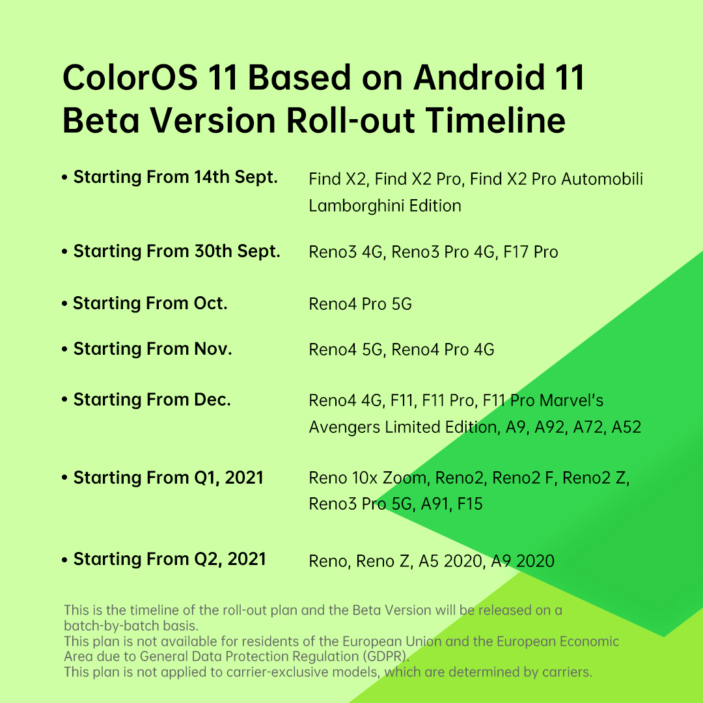 The new OS will also come with the very first feature co-created by OPPO and Google, that being Three-Finger Translate. Powered by Google Lens, the technology captures and translates text through a simple screenshot taken with an intuitive free-finger gesture.

Other new features include Flexdrop, a multi-tasking solution where users can watch video and text at the same time; a new way to switch between and control different smart home devices with a refined Device Control menu; and a new Super Power Saving Mode, which lets users select six apps to run in low-battery settings.

Battery life should benefit greatly from the new updates, with compatible phones pausing charge once the phone reaches 80% at night and then resuming to achieve a full charge by the time users wake up. This will theoretically prevent any damage from prolonged charging at unstable power voltages, tweaked automatically through learning a users individual habits.

Frame rate should also see a nice boost with the ColorOS 11. OPPO are bringing in a new UI First 2.0, which combines the company’s proprietary lag-reducing engine with Quantum Animation. This boosts RAM utilisation by 45% which should improve the response rate by 32% and the frame rate by a nice 17%.

Security and privacy concerns are paramount with smartphones today, and OPPO has maintained Android 11’s key features surrounding this, while creating a series of additional privacy protection and data security features.

Private System creates a separate system where a second version of apps and data run independent of the original, and is accessible only via a separate fingerprint scan or password.

App Lock is now easier to access with a new shortcut to lock apps through password, fingerprint or facial verification. The permissions system has also been enhanced, with temporary permissions that reset camera, microphone and location access when the app is closed.

If an app hasn’t been used in a long time, the OS will now auto-reset all permission settings to default to help prevent malicious apps from accessing other apps’ data, while Scoped Storage restricts apps’ access to phone data, requesting user permission in order to do so