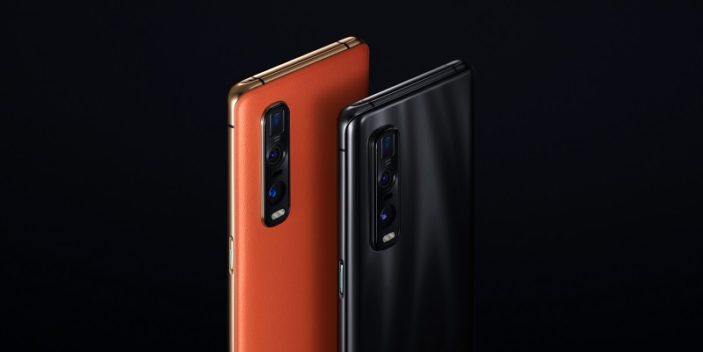 Oppo has been showing force this year. First, they reiterated their high-value approach to the budget and mid-market sectors with the likes of wallet-friendly A52. Now they’ve bought that sense of value to the highest tier of smartphones, with the hugely anticipated 5G-ready Find X2 Series, the top of which is the Find X2 Pro, trailed by less expensive models Neo and Lite.

The Pro is of particular interest here, since it has almost immediately been claimed as one of the best “alternative” (ie, not Samsung or Google) Android phones to date.

Is it though? Yeah, it kind of is. Though it’s awkwardly tall and stupidly expensive, the X2 Pro is a confident statement from Oppo, keen to show they are just as nifty when it comes to playing catering to top-tier consumers who want a top-tier phone. Come year’s end, it’s going to be hard to talk about flagships without giving special attention to this all-rounder.

With curves in all the right places, excellent specs and a classy orange “Vegan Leather” variant, is it worth the roughly $400 bump up from last year’s stylish and well-received Oppo Reno 10x Zoom? 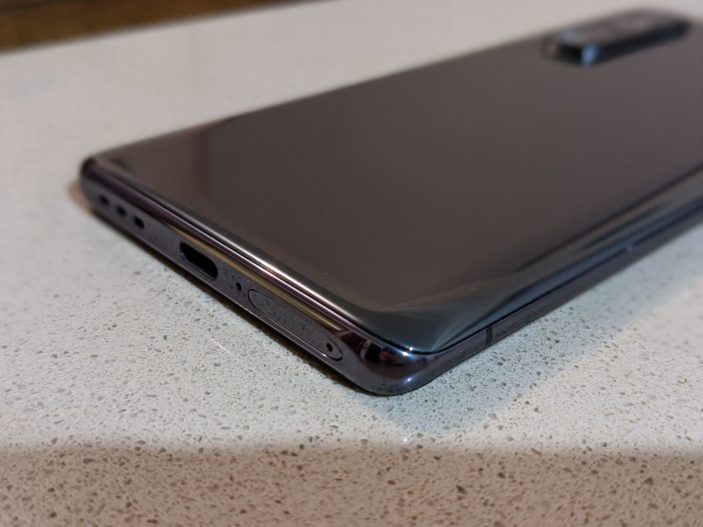 Long, thin and lanky; the “ceramic black” version (which this review is based on) of the Oppo Find X2 Pro measures in at 165.2 x 74.4 x 8.8mm. That’s pushing it for usability, but just lithe enough to look elegant in one hand. Aesthetically, “Vegan Leather” is much snazzier with its showy orange rear and rose gold accents, but it’s also slightly thicker (9.5mm), while ceramic black sticks to a plain old black on the rear. Thankfully, this relatively vanilla choice isn’t as much of a fingerprint magnet as most glass phones are.

Much like the phone’s awkward length, the rear camera bump is equally elongated and looks rather odd with it’s triple camera array, a 48MP (f/1.7) lens leading the charge. On the front, Oppo goes with the hole-punch – a barely noticeable but powerful 32MP (f/2.4) HDR lens capable of gorgeous 1080p videos at 30fps. 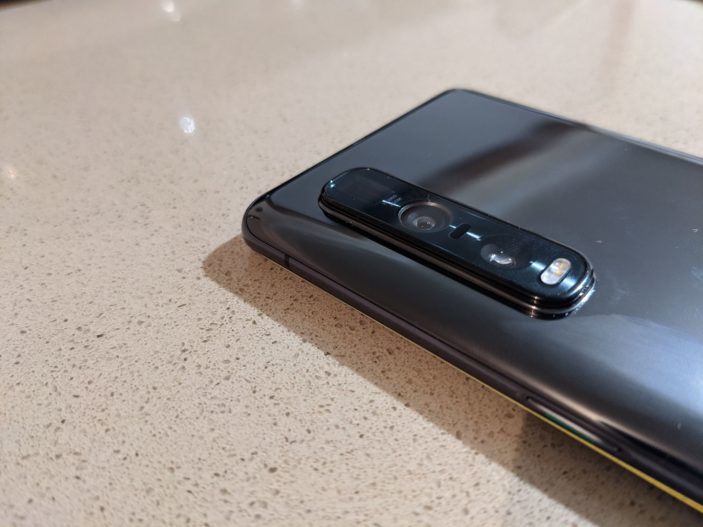 A one-SIM tray sits on the bottom, next to the central USB-C port and one of the dual stereo speaker, the other located near the top of the screen. A layout as logical and accessible as this doesn’t need to break any ground.

As with most high-end phones now, the 3.5mm headphone jack is sacrificed for a very reliable IP68 rating, fighting of water and dust like a pro. The original Find X2 sits lower at IP54, so this is a nice bump for content creators who will be taking this travelling.

The icing of this build is the stunning 6.7-inch AMOLED display with 1440×3168 resolution and HDR10+ – easily one of the best screens on a phone right now, with the ability to run both Quad HD+ and 120Hz simultaneously. This could be the biggest reason why the battery doesn’t last as long as you’d expect (more on that below), but the absorbing viewing experience is worth it, with a good top of 800 nitts, excellent contrast with deep, inky blacks, and the assist of a video enhancement technology called Motion Clear. This upscales videos below 30fps to 60fps or 120fps with outstanding consistency, but for most content that’s shot at 24fps it just keeps it looking smooth and seamless.

For biometrics you’ve got a reliable in-screen fingerprint reader but there’s no 3D face unlock for those who enjoy the more nuanced and accurate tech. You’ve just got a standard face unlock here, which is reliable enough anyway and will only become a seconds-long issue on those on rare occasions.

None of these ingredients are ground-breaking, but the way they’ve been implemented to complement and elevate each other lends to one of the best and most seamless experiences I’ve had with an Android phone to date. Even more so when Oppo’s signature Color OS 7.1 (on Android 10) has been boiled down to offer a more intuitive UX.

Power is a given. With a top-tier 64-bit Qualcomm Snapdragon 865+ octa-core processor keeping everything running alongside 12GB RAM, power users should have no problem milking this thing for all the multi-tasking, app-intensive, game-pushing its worth. The only issue is that, along with the absurdly beautiful display, the dual-cell 4,260mAh battery can drain faster than expected.

This is still a one-full-day use device, and the cardinal sin of less-than-ideal juice is certainly atoned for by what Oppo calls 65W SuperVOOC 2.0 flash charging. It’s not just snazzy marking speak either; this thing is ridiculously fast when it comes to charging – no wireless though – and I would consistently get over 50% in just 15 minutes. That’s Asgardian-level lightning right there, putting it amongst the fastest and most reliable phone charging on the market.

For someone like me who often forgets to charge their phone because I’ve become accustomed to not having anywhere to go anymore (damn you COVID), this is hugely valuable. No more will I have to grab my phone before a jog, only to realise it’s on 2%, causing me to delay my daily exercise (I cannot walk without music, it’s impossible). 10 minutes, easily 40%, done.

Do note that as I’m a firm believer of the “wait and see” given no one in Sydney seems to be following social distancing guidelines, I’m currently restricted with how I test out the phone’s camera. Further down the track, I’ll be posting another feature focusing solely on the camera and using it in different scenarios. Assuming a positive outlook for this current pandemic.

Also be aware that the following photos have been scaled down for smaller file sizes.

Don’t expect much quality if you’re going onto 60x zoom of course, making it more useful for practical purposes. An example would be reading a sign from far away. But largely, it’s a superfluous feature that seems like it was only included here (and in previous Oppo models) to show-up the Huawei P30 Pro, which has a similarly excessive 50X zoom.

That being said, I did use the Huawei P30 Pro on a South African safari last year, and the zoom often made up for my bad eye-sight; I’d expect the same here.

There’s no ToF sensor, but depth is still remarkably accurate for the most part. I still get slightly better portraits on the Google Pixel 4 XL with much stronger bokeh, but the level of texture this can pick up certainly makes up for the lack of background blur.

Where the Pro has really impresses is with the ultra-wide angle. Although night photography has seen the biggest steps forward in smart phones lately, many flagships don’t seem to bother tackling the issue of barrel distortion. Oppo has wisely paid attention though, and as such you’ll get wide shots that look natural and accurate, as opposed to awkwardly stretched. Although, going ultra-wide does seem to trigger AI to oversaturate colours slightly.

Overall, you can expect remarkably detailed and sharp shots, really vibrant colours, accurate texture, and a surprising level of detail in shadows. AI seems to be a workhorse here, lifting detail so you end up with some really rich and likeable results. There is a tendency towards overexposure and flare at times, and while the incredible detail in shadows helps in most situations, in others the lighting can look a bit artificial.

See the below example, with the same photo taken on a Google Pixel 4 and the Find X2 Pro. The Pixel 4’s shadowing does capture some detail and look more natural, while the X2’s is noticeably brighter and picks up more detail, despite the luminance.

Still, the X2 Pro has incredible prowess when it comes to low-light photography, on par with the aforementioned P30 Pro and Pixel 4’s Night Sight, but as long as you keep it very steady while it’s capturing its multiple frames. I find there is often some blur if you haven’t kept the phone still, which is natural if you’re holding it as opposed to using it with a gimbal.

Though Samsung has already gone with 8K video recording, Oppo stick with 4K/60fps capture and ensure recording is beautifully smooth and silky. If you want better stabilisation you’d need to drop to 1080p and turn on Ultra Steady mode, but it’s worth it for content creators.

With an exceptional display, considerable camera system, super-fast charging, and Oppo’s smoothest UI to date, there’s plenty to like about the Find X2 Pro. It’s rightfully going to go down as one of the “it” flagships of 2020, but the eye-watering price tag is at odds with Oppo’s usual focus on value.

You’re paying a lot for what you get here, and there are definitely arguments to be made given there are competitors that are just as feature-rich at a lowest price point. They aren’t necessarily as well-balanced as this though, with everything working in concert to offer an exceptional smartphone.

Review conducted on a unit supplied by Oppo.