Dyson V11 Outsize Review: Do you believe in magic?

Looking for a new vacuum to me isn’t much a matter of power as it is motivation. When Dyson, who have already proven themselves incredibly reliable when it comes to home tech, slap an eye-watching price tag on a product, they at least pack it with enough punch to justify to hefty investment. Specs is a given. As such, it’d just be straight up foolish to doubt that the cordless Dyson V11 Outsize isn’t the more desirable choice for the smart home that needs a smart vacuum to match.

But I think its the motivation factor that separates the Dyson V11 Outsize from similarly priced devices on the market. The design is in absolute worship of convenience. Which then makes it much more likely those smaller chores won’t be ignored until they build up into bigger issues. I’ve been using the V11 Outsize throughout the year, and despite the whole staying at home more often thing, it has made me lazier than ever before. It’s then a surprise to me when I notice something small that needs doing, and do it straight away without any delay. I keep the house clean at all times, and that simply wasn’t the case before.

Yes, it’s typical of a man. But setting up a vacuum takes up more time than I’m willing to give the task, especially if it’s attached to a power cable. The way the V11 Outsize has been built, I can simply pick it up, pull a trigger, aim the gun, and the mess is gone. It’s the ultimate dirt-sucking piece to streamline the whole thing.

And with all the writing I’ve done on smart homes this year, I’d be remiss if I didn’t pay extra attention to this fantastic product. It does what smart technology is supposed to. The V11 Outsize streamlines a daily chore to free up mental space and time better spent on other things, without the guilt of knowing you’re mess is piling up into one big spring clean.

Given Work From Home is a trend that’ll stick well into 2021, it’s even more valuable to have something like this lying around. See mess, clean mess, get back to work.

There are a few models of the V11, and the Outsize represents a substantial improvement upon previous iterations. Like the slightly less expensive V11 Absolute Extra, there’s a click-in battery for easy use across bigger homes. One battery lasts roughly two hours, and an sold-separately batteries can be replaced in mere seconds. With an indicator on the clean and intuitive LCD screen, it’s unlikely you’ll ever have to worry about running out of juice, which then makes it ideal for more commercial use as well.

The dust bin is always paramount, of course. This one is 150% bigger than the average, at 1.9L, even more when thinking about most mass-market vacuums out there. Given that the most annoying part of a vacuum run is realising the dust bin is full and having to go empty it before continuing, having that substantial boost in capacity is valuable. It’s one of the many things about the V11 Outsize that works to reduce time spent on the task at hand.

While forking out a bit more will get you eight different attachments, the Outsize I have to based this review on comes with five attachments. First is the combination tool, then the specialised crevice tool, mini motorised tool, soft dusting brush, and stubborn dirt brush. That’s a wide enough range to tackle harder to reach areas and optimise performance based on the surface and shape. Attachments couldn’t be easier to switch in and out, but even without there’s a 25% wider cleaning head (32cm) compared to the standard vacuum, which cleans more surface at a time, but makes it slightly more difficult to fit into tighter places – an issue of course negated by the attachments.

The high torque cleaner head offers 40% more suction power than the already powerful Dyson Cyclone V10, and a Dyson Hyperdymium motor with 18 Dyson cyclones for a force of more than 79,000g. Few pieces of pollen, dust and bacteria will be able to get resist this bad boy, which traps 99.97% of particles as small as 0.3 microns with its fully-sealed filtration system. If that feels like too much numbers to wrap your head around, just know that this translates to exceptional performance far beyond what most people are used to with a standard vacuum cleaner.

The smart part kicks in with Dyson’s Dynamic Load Sensor technology, which continually optimises cleaning and runtime based on the surface type, so running this thing across floors and carpets won’t require stopping to manually adjust settings and attachments. I have not once had to re-tread a surface because the vacuum didn’t decide itself how best to approach the surface. 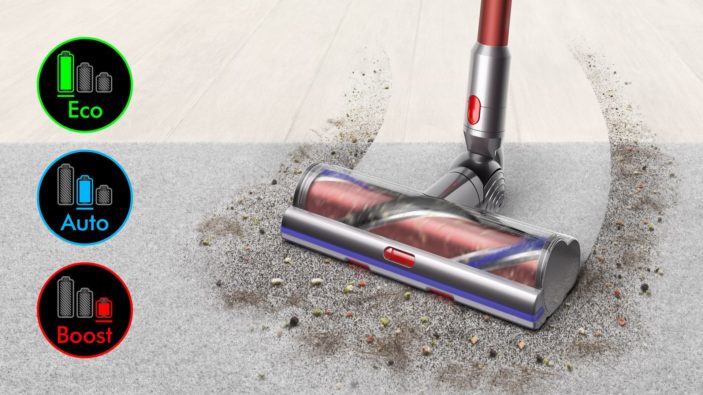 The V11 Outsize has three modes that are easy to switch between with the LCD display. Auto mode is what most people will be leaving this on, but there’s also Eco which intelligently calibrates the system to optimise battery life at the sacrifice of some suction power. Still, the downgrade isn’t much, and for my mid-sized home, it was absolutely fine to clean through the house across various surfaces. The Boost mode does the opposite; obviously you’re putting up with some battery drain, but those dirtier and more stubborn surfaces will benefit from the uptick in suction power. Seeing as I don’t need even two hours to vacuum the entire house (especially with how much time the ergonomic design saves me), Boost mode is my go-to.

$1,299 is a lot to invest in a vacuum cleaner, but Dyson has never been a cheap brand to get into. As I’ve seen with their fans, you get what you paid for. There’s no doubts about the quality or the longevity with the V11 Outsize, which makes it much easier to part with 1300 bucks. Combine this with an air purifier – Dyson make those too, but there are plenty on the market – and modern technology has finally tackled the issue of unseen, insidious home pollution head-on. Take advantage of that.

Highlights: Bigger battery, bigger head; tremendous suction power will surprise even the most chore-adverse and make sucking up dust seem fun; convenience means that it’s less of an effort to clean the house.
Lowlights: Value is obviously best realised by larger houses, so decide if you need one first.
Manufacturer: Dyson
Price: $1,299
Available: Now

Based on unit supplied by Dyson.