Last year Dyson completely outdid themselves with the three-in-one Dyson Pure Hot + Cool, offering an incredibly efficient device that could cool, heat and purify a room with ease. The device’s imposing size meant that this could handle all three functions for an entire room, whereas Dyson’s latest play, in the bladeless fan space they helped pioneer, thinks on a smaller scale.

The Dyson Pure Cool Me shifts focus to the individual, aiming for a personalised temperature controlled environment by manipulating the immediate space around just one person. Ideally, it’s for the bedside table or an office desk. And it’s goal is to simply cool and purify the air around it, sucking up the bad and spitting out the good to keep spaces cool, clean and breathable. 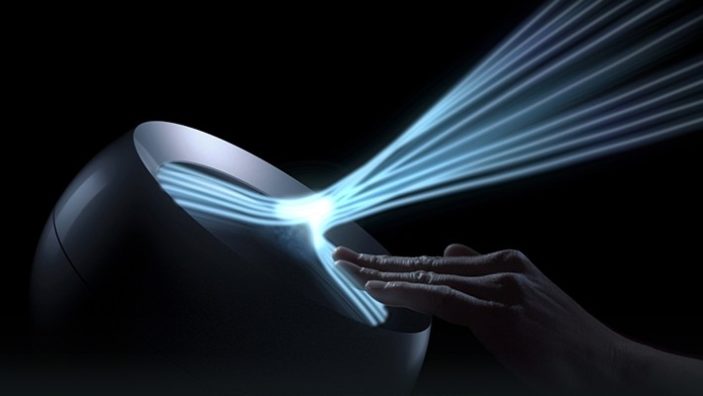 Let’s get to design first, because it’s one of the most curious things about this device. The eye-catching convex design that goes with this hooded dome structure on the top makes the Pure Cool Me look a bit like a trash can. A plain white and colour scheme is offered for those who like a safe neutral look, but the “gunmetal black” version – black and nickel – really plays into the futuristic aesthetic and really stands out in the home.

It’s clear Dyson’s design team had fun with the latter colourway especially, defining it by the nickel flavoured adjustable dome in the middle which is matched by the remote. It’s a sleek look that is well-connected with how smart and modern this device really is.

Design also follows function, sculpted to take advantage of core flow air projection technology. This projects a precise stream of air that’s more concentrated than diffused – stronger airflow, shorter range. The dome panel can be adjusted by hand to direct the air either upwards or downwards, shooting from the narrow apertures at high speed. The result is an airflow that’s clean, direct and targeted without shooting all over the place – you’re unlikely to have the issue of paper blowing everywhere when you can control exactly where you want the airstream to flow.

At 6.2 pounds, this is Dyson lightest fan to date. Although, it is quite chunky thanks to the thick cylindrical bottom where the filters sit. The perforated holes around the body are there to help the filter’s work more efficiently, while there’s a dedicated space on the front of the device for the small remote control which can be attached via a magnetic pad (albeit a strangely weak one that can slip if not placed properly).

A downside is the lack of physical buttons on the device – there are virtually none. This means that you better make sure you’re keeping track of that tiny remote control, because once it’s gone, the Pure Cool Me is pretty useless. It would certainly help if there was a stronger magnetic pad to keep the remote in tact. In terms of the remote itself, it has all the expected functions, with six buttons so you can control the sleep timer, airflow speed, oscillation, power, and display screen (mostly used to check the filter’s life). 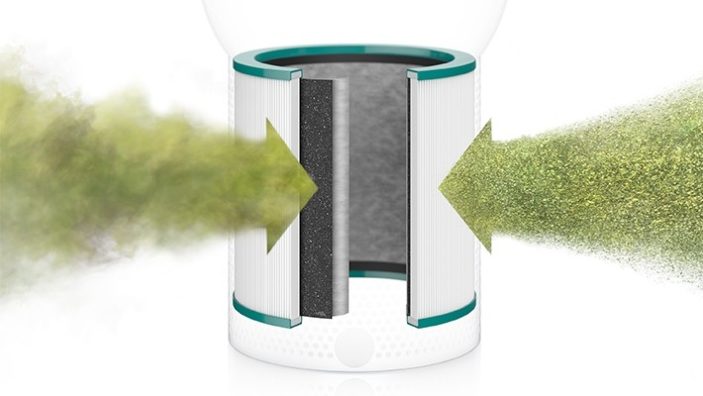 The inclusion of a two-stage air cleaning system shows that Dyson are placing just as much importance on air purification as they are on the cooling features. As far as the official description goes you can expect the filters to capture 99.95% of any particles down to 0.1 microns, sucked in by powerful activated carbon (for odours and medium to large particles) and glass HEPA (for gases and ultrafine particles) filters. This will make quick work of most allergens, bacteria and gases, which for Sydney – where I live – is absolutely crucial at the moment.

It’s of course hard to measure the exact efficiency of this filter, and the small LED screen included on the device’s face is unfortunately not as detailed as that of the Dyson Pure Hot + Cool. The complete absence of smartphone connectivity is also a downside when it comes to this, meaning you won’t have access to graphs or more specific indications to air quality.

You will, however, be able to easily see the status of the filter itself and when it’s time to replace it. Luckily these things last for a decent amount of time, with replacement only suggested after 1 year of use, based on a daily usage of 12 hours.

Seeing as the Pure Cool Me will often be used to keep people safe and cool while they sleep, sound design is key. Dyson have put a lot into keeping the device as unobtrusive as possible. On the highest speed, 10, the noise level is around 63.5db – higher than average but mostly made up of white noise, making it easier to sleep when this thing is working at its most powerful. On the lowest fan speed, 1, the Pure Cool Me has been measured at 37db, which is very hushed.

The remote control can be used to set a shut-off timer for as little as 30 minutes or as much as 8 hours, so simply setting the Pure Cool Me to gently coo you to sleep, monitor the air, and then turn off to conserve power is the ideal use case.

Can It Cool A Room?

As mentioned above, the drawback of the Pure Cool Me is its small scale. It shouldn’t be purchased as an alternative to a more powerful fan like the Cool Tower Fan, but as long as you know what you’re getting yourself in to, this is perhaps the best value Dyson product on the market.

While you can’t cool an entire room with the Pure Cool Me, you can set it at an oscillation of up to 70 degrees, which is quite decent if you have someone else who wants to get in on that jet-powered airstream action (for example, in an office).

Importantly, the LED screen is smart enough to dim itself when the room darkens, so having this on your bedside table won’t cause any visual issues.

Better smart functionality would have really benefited the Pure Cool Me. There is no way to track in real-time the air quality which, for a modern air purifier, should be standard. The ability to bring up so much information about air quality was one of the best things about the Dyson Pure Hot + Cool, but unfortunately a reduction in scale also means a reduction in features.

Information aside, the Pure Cool Me does pretty much everything you’d want from a personal fan and air purifier, and does it exceptionally well. The ability to cool someone immediately is unparalleled thanks to the precision jets, and two-stage air cleaning system is the same as the one used in the Pure Cool Tower (and that’s listed as a certified product on the Asthma and Allergy Foundation of America website). For a high-end personal fan, at this reasonable (for Dyson) price point, there’s little to complain about.