BlueAnt X3 Review: A reliable performer that’s 100 per cent Australian owned and made

A chunky 9,600mAh battery, a built-in power bank, and a punch 30-watts of power with an optional Bass Boost feature – what’s not to love about the BlueAnt X3? Well, it’s design doesn’t help the portable boombox stand out on a crowded market, although it offers enough to muscle around with the likes of JBL’s Charge 4 and the Ultimate Ears BLAST. Plus, it’s an Australian product – 100% locally made and owned. That counts for something, especially given the desire to support domestic industries in 2020.

As mentioned, there isn’t much about the X3’s design that distinguishes it from your everyday Bluetooth speaker. It comes in plain black and sports a dual horizontal and vertical design, although it looks much better when standing on its short, stumpy legs. Whatever the orientation, the physical buttons are wisely positioned so they can be easily reached regardless, offering the typical map of playback control which includes various taps and holds to access different functionality – hold the volume buttons for next/previous track, hold the Play button to bring up a phone’s voice assistant (Google, Siri). The buttons feel a bit chunky and awkward to press, requiring more force than some other rival speakers.

Whatever function you’ve chosen to perform, the speaker will literally shout it back at you, regardless of volume. This is a crucial design flaw that gets annoying if you want to listen to the speaker on the lower volumes at night. Though it’s not much of a big deal in any other scenario.

Aside from the basic design, the speaker is quite sturdy with its reasonable IP67 waterproof rating. It’s heavier than I’d like, at 1.1kg, but still quite ideal for outdoor use. And outdoor use is exactly where you want to be if you’re making a Bluetooth speaker in 2020, given more people are aching to get out on those weekend road trips and take their music with them. It may not be as lightweight to chuck in a backpack and take on a hike though, which chips away at the value when considering other, lighter speakers on the market that are just as powerful.

What gets the X3 over its competition is the huge, reliable battery life. 9,600mAh isn’t the bigger juicer I’ve seen on a speaker this size, but it’s more than enough – especially when the speaker can be used as a powerbank to charge a device via its USB slot, while not obtruding on any listening session. The output is lower than I’d like though, so even if your phone supports fast charge, it’s going to take awhile to juice up to 100%.

Under the grille are two 57mm drivers and two passive radiators, more than enough to push to satisfyingly loud volumes but still maintain a good amount of balance for whatever style of music you’ve got going on. Bass Boost will mess up the battery life quite a bit, but it’s enough to add a lot of oomph to styles like hip hop and EDM. Importantly, the bass sticks through those louder volumes, but it can get notably muddy at max. Thankfully the mids and highs are quite endearing no matter the volume, and even with Bass Boost turned on, they aren’t lost in the mix. I like the way they sound much more than the Charge 4, which says a lot, given JBL are much more firmly established than this Australian brand.

If you’ve got two X3 speakers you can pair them up with Duo mode – not something I was able to test. 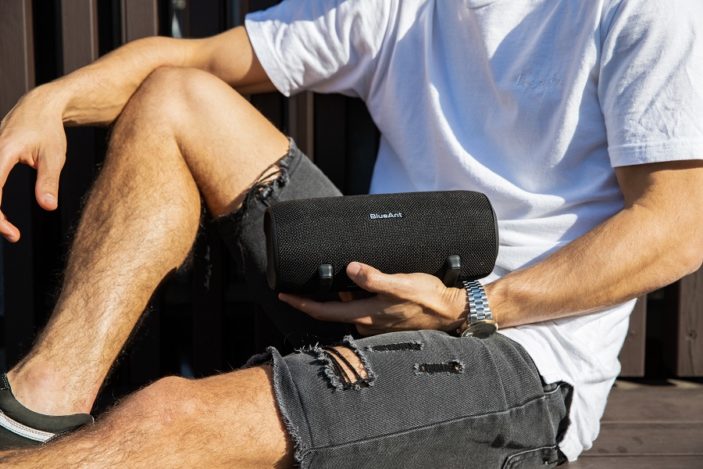 Expect 15 hours on a single charge. At least that’s the promise here, and while the battery is definitely capable of that with reasonable use – ain’t nobody got time for ‘reasonable use’. With Bass Boost and max volume, safely expect around 4-5 hours before the juice is gone. USB-C charging is fast, but not too fast. You’ll want to keep this topped up overnight if you’re on a camping trip.

$239.95 is a decent ask for a speaker like the BlueAnt X3, and I’d say it’s a nice balance between price and performance. As long as you see the value in supporting local, the Australian tick can make up quite a bit of that value, while the likeable performance fills the value void that the boring design and awkwardly large buttons leave. I’d say that’s good enough reason to consider this as a strong contender for any mid-range portable Bluetooth speaker needs.

Review based on a BlueAnt X3 supplied by BlueAnt.