People have been looking towards their own backyard when it comes to travel this year. That isn’t just a metaphor for the increase in demand for domestic travel, but a literal look at how we can turn sections of our own house into slices of escapism. Even the very act of moving the ol’ BBQ to a different position goes a long way at recreating the feeling of being on vacation and doing something differently.

Imagine then how liberating it can feel changing the very aesthetic of your yard? Surely that’s what’s behind the renewed interest in Philips Hue smart lighting, which has just expanded to include an expanded outdoor collection for those wanting to control to mood of their outdoor space.

Just do some light digging around YouTube and you’ll see that people have found creative ways to maximise the Hue indoor range, the most exciting of which is syncing it up with IFTTT so they can create their own ‘rules’ for when lighting is controlled. For example, the lights would glow a certain colour when you receive a text (perfect for when the phone is on silent and out of reach), or even change tone if rain is predicted that day. Those with smart security set ups like an Arlo ecosystem have even been setting it up so that when motion is detected, for example, the lights change.

I do think IFTTT is the best way to maximise Hue Lighting products, so playing around with the huge range of smart rules has taken up a lot of time in past few months. One way was to set up an Impress Pedestal near my front garden, make sure it’s connected to the Hue Bridge (the centre control of all your lights) and make sure that Bridge was then connected to my Google Home.

Once that was all linked, I logged onto to IFTTT and created a rule, that if my Arlo Pro 3 detected motion, the light would turn an amber hue and I could easily see it from my lounge room. Despite me living on a quiet street of not particular note, and having no particular use for the function, it was a fun and easy set up that worked seamlessly. 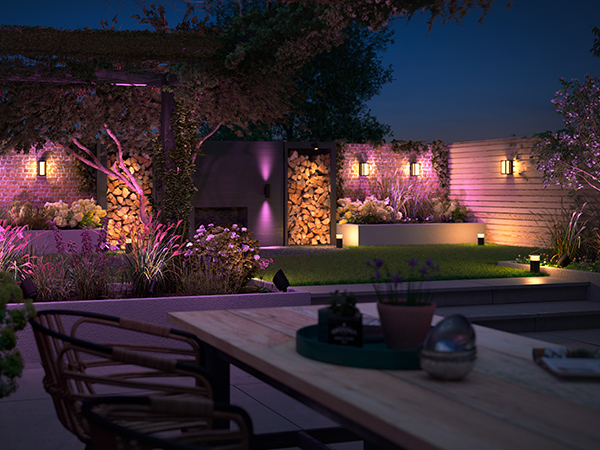 Even without the use of IFTTT, you can get a lot of functionality and flexibility out of Philips Hue with the brand’s accompanying smartphone app. The remarkably clean and simple interface allows not only the control of 16 million of different hues, whether the lights are used as part of a defined group or as individual switches, but also the ability to create routines.

Basic things like the lights springing to life when you get home, or going to sleep after a certain time, work without issue and are, most importantly, consistent. I again refer to my Impress Pedestal since it’s my favourite product of the ones that I’ve tested.

Setting it up so that the light would come on at 6pm every night, serving as a reminder to jump on the treadmill (lol), worked without fail. When I was done, I simply told Google to turn that specific light off, and within seconds it was out.

This is of course very basic automation stuff for smart homes, that should be second nature for a lot of people now. The important part is that the Philips Hue range integrates beautifully into the smart home ecosystem, and is a reliable and fundamental part of automating the day-to-day.

Where Hue still needs some work is on the smaller details of design. Products like the Pedestal look sleek and modern, with symmetrical design that doesn’t feel cheap. But my 5m Light Strip suffers simply because it’s too bulky. Light Strips are the most flexible of Hue’s entire range, and the outdoor version of that should ideally be just as slim and unobtrusive as the indoor version. It’s not.

Despite it being the most versatile when it comes to design, the strip’s silicone cladding looks a bit jarring unless it’s fully hidden away wherever you place it. My backyard doesn’t have too many curved features, but I could imagine for ones that too, following it with the strip would look best if you had something to tuck it under so it’s not sticking out as much.

The included U-shaped clips can be used to keep the strip in place, but unfortunately it cannot be cut to size so anyone considering one should choose carefully between the 2m and 5m options. On the plus side, there’s an IPX6 rating so the strips will have absolutely no problem endearing despite changing in environmental conditions. 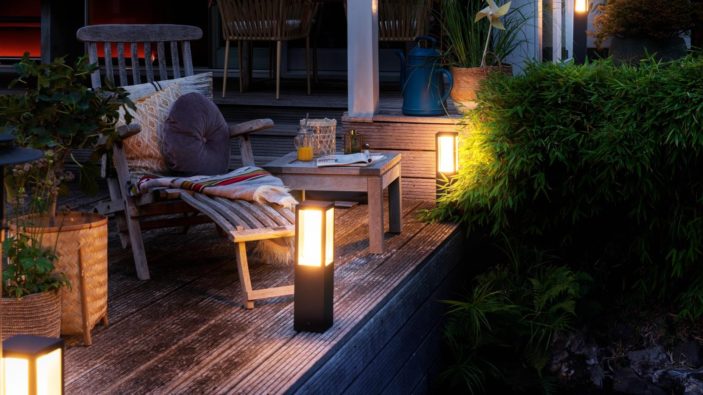 Light performance should be of no question by now to anyone who has owned any Philips Hue product in the past. The new outdoor range is no exception, with the ginormous range of hues available to flick through immediately via the app. Dimmable output on the strip, for example, can reach as low as 740 lumens and as high as 900, easily illuminating the immediate area even if it’s just one light doing all the work. T

Colours are rich with temperatures between 2,000 and 6,500k, with the most glow coming from reds and oranges. Being someone who travel frequently, I used the fact that I have multiple products to, sentimentally, mirror the flag colours of different countries each week. The simple red and yellow scheme of the distinctive New Mexico flag currently spark in my chosen corner of the backyard. As abstract and unintelligible as the set-up is, it’s a small comfort to how much I miss aimlessly strolling around Santa Fe right now.

I’m far from alone when I say that I’ve become increasingly fascinated by smart home automation. We’ve been covering a lot of smart home essentials on the AU review this past year, and after playing with the Philips Hue range for a few months now I’m confident enough to say that no smart home is complete without at least one of these lighting products.

The diversity you can get out of one simple bulb is simply to much to ignore, especially now that IFTTT has become an easy to use platform. But the most value I see right now is on the mental side of things. We’re all aching to get out and travel a bit more given what the world has gone through, and is still going through. Designing the yard as a visual escape for day-to-day monotony has had an overwhelmingly positive impact on my mental health.

As flailing as it is, being able to change the look and feel of my own little private sanctuary each day at least added some aspect of freshness and change during the more stringent lockdown periods of April and May. That’s worth a lot right now, and capturing a bit of that liberating travel mentality with a bit of creative design goes a long way.

Highlights: IFTTT integration works very well and is easy to set up; Setting routines on the native app works reliably well; 16 million colours to choose from; hues are accurate and can be as bright or dim as you want.
Lowlights: Strip not as slim and flexible as the Indoor version; Strip can’t be cut.
Manufacturer: Signify
Price: From A$89
Available: Now

Review based on units supplied by Hue.