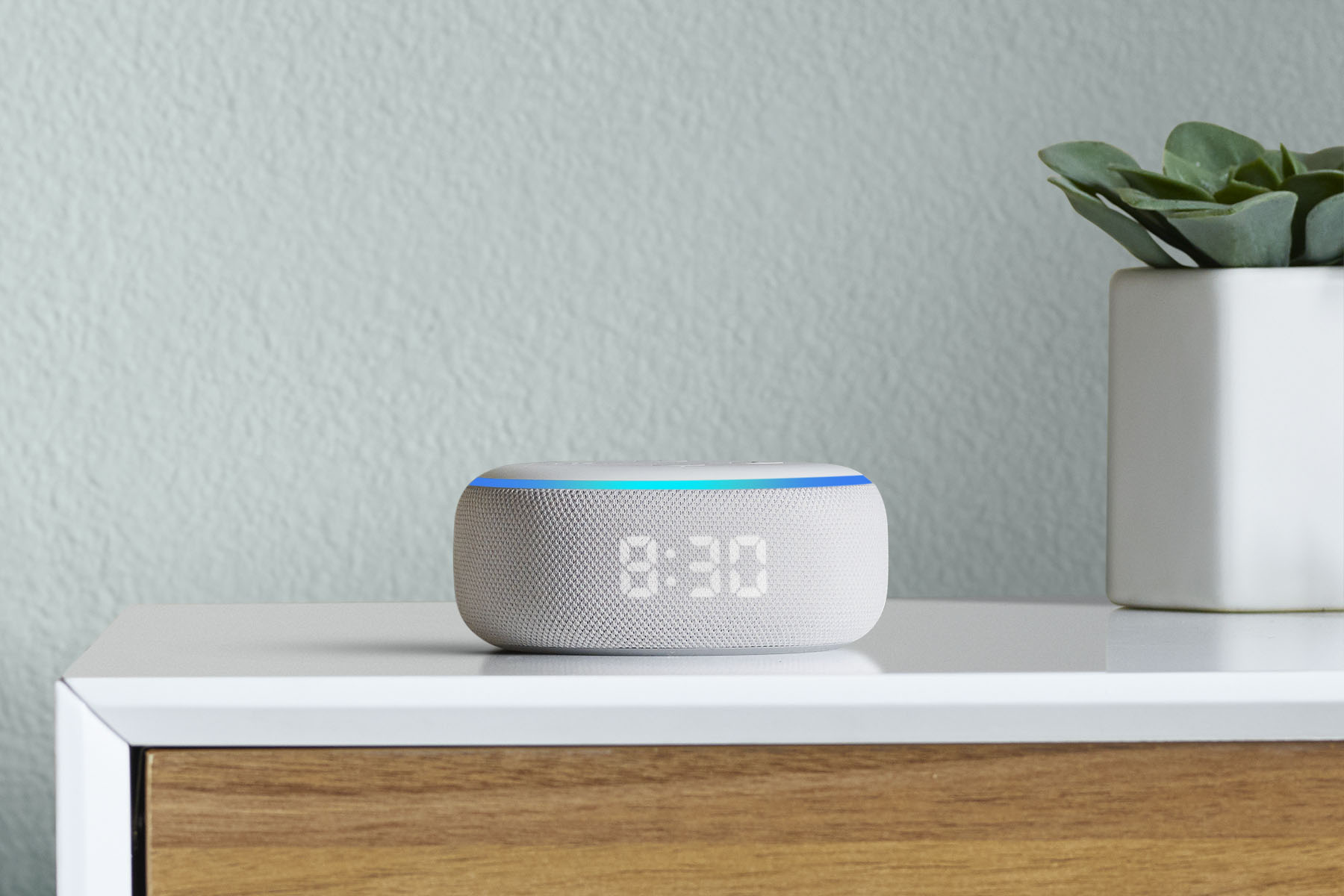 Amazon claim that the Echo Dot is the best-selling speaker of all time. I haven’t looked into that, but I haven’t doubted it either. It’s ridiculously affordable, offers incredible value and looks fantastic sidling up to everyday furniture, whether that be on a bedside table or in the kitchen. Since 2015, the device has been refined a total of three times – the Echo Dot is better than it’s ever been and, with a smart addition, it’s popularity won’t be slowing down anytime soon.

That smart addition is simply a LED display beneath the front-facing cloth band that wraps the device, serving the sole purpose of display the time in big block numbers. It’s a simple tweak, and it makes this smart home entry-point all the more valuable, especially when the display can be programmed to show the current temperature (outdoors), and act as a timer.

If you’re familiar with the Echo Dot, nothing’s changed other than the added LED display which runs around the device’s front without looking stretched. Aesthetically, the primary look comes from a soft light grey fabric grille which is wrapped around the circular body which looks a bit like an ice hockey puck. The neutral colourway fits in with pretty much any smart home décor, but now stands out with the bright LED display which auto-adjusts as a function of how bright the space is.

The speaker’s surface is covered with four perfectly symmetrical buttons, two to toggle volume, one to mute the always-on microphone, and one as a primary Alexa function button. It’s also here you’ll find the quadruple array of microphones that pick up voice clearly and from a reasonable distance.

Echo Dot’s top edge flashes with a sightly blue ring when the Alexa function button or an actionable word activates it, indicating that Amazon’s voice assistant has been summoned and is currently awaiting instruction.

Around the back of the device you’ll find a deep white groove with the power input and a 3.5mm jack which can be used to add any additional speaker to the party, or add voice assistant capabilities to any speaker which doesn’t already have the ability. Unfortunately, the Dot doesn’t ship with a 3.5mm cable.

That 3.5mm jack will come in use if you want to milk a decent audio performance out of this. Connect it to a better and more powerful speaker and you can have a proper audio set up. Although you’d be better off just going for the Echo Studio in the case, or – better yet – the more expensive Echo Sub.

The Echo Dot isn’t great when it comes to audio performance. The bass is surprisingly punchy with a lot of texture for its size, but everything else is too sonically squashed. Simple music for background noise is the best use case for this, nothing more.

Turning your Echo Dot into a hypervigilant assistant is no issue with the Alexa wake words. The mics work well, although you’ll be talking a bit louder if you’re pushing music above a “6” in volume. Otherwise it’s a smooth, seamless voice assistant experience, opening you up to the entire Alexa experience which includes controlling a smart home, playing music, and fetching useful environmental information about whatever you have your location set to in the companion app.

The Dot will be more valuable once Alexa Communication, which allows you to make and receive calls via the device, becomes available in Australia. Amazon are often the slowest when it comes to rolling Alexa tricks out to the land down under, but at least when they do it works reliably.

If you’ve got an Echo Dot already, there’s no reason to upgrade. However, if you’re part of the Alexa echosystem – or looking to get involved – and you don’t yet have one, then foregoing a few cups of coffee and forking out $10 more to net you the Echo Dot with Clock is a smart choice. The LED display looks gorgeous, isn’t obtrusive at night, and adds a slither of extra convenience to a device which is already designed to make home life a lot easier.

Review based on a unit provided by Amazon. This is not a sponsored post and all opinions are that of the writer’s.