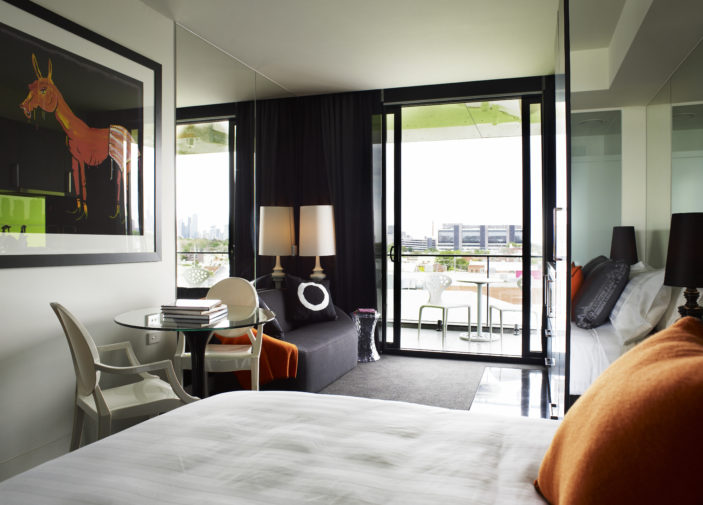 Hotel Review: The Cullen remains one of Melbourne’s most unique hotels

It all started here for Art Series Hotel Group, the boutique hotel brand renowned for dedicating each of their properties to an individual Australian artist. Opened in 2009, The Cullen was the first for the group, and has arguably remained one of their finest achievements, thanks to the late great Adam Cullen and his grungy […]

The Chen represents a significant move for Art Series Hotels now that the seven-property hotel chain has been bought by Mantra Group. Described as a “luxury boutique”, it’s the first Art Series to open in Melbourne so far from the CBD, located in the increasingly viable area of Box Hill which is around 21km outside […]

Melbourne-based artist Zhong Chen is the muse for The Chen, the latest property from the country’s unique Art Series Hotel Group which is renowned for its high-end hotels dedicated and built around the works of an individual Australian artist. The group’s eight art inspired hotel will open later this month on November 22nd in Melbourne’s […]

From the 1st May until the 15th June, the Art Series Hotel Group are inviting guests to sleepover, strike a pose and find themselves the subject of a life drawn masterpiece. This is all part of the hotel group’s ‘No Robe Package’ which asks guests to reveal the “real” them for a group of artists […]

When it comes to Australian hotels Art Series Hotel Group is one our most valuable and inventive assets. The beloved hospitality group has been playfully sprinkling creativity on unique locations for years now, echoing a focus on one Australian artist for each property to make for colourful, idiosyncratic accommodation that not only reinterprets classic hospitality, […]

Earlier this year, one of the most highly regarded boutique hotel brands in the country, Art Series Hotel Groups, finally opened the doors to their long-awaited Queensland debut, The Johnson, followed an extensive three-year renovation of the heritage listed Main Roads Building. Like its sister hotels, the property pushes light-hearted luxury with a link to […]

Art Series Hotel Group to expand into Brisbane with The Johnson

With their first ever Queensland expansion for Art Series Hotel Group, Brisbane will be getting a new five-star hotel in June 2016, The Johnson. Master colourist Michael Johnson will be the inspiration and focus of the hotel, coming on board with his work to illustrate the property with his original paintings and giclee prints. Located […]