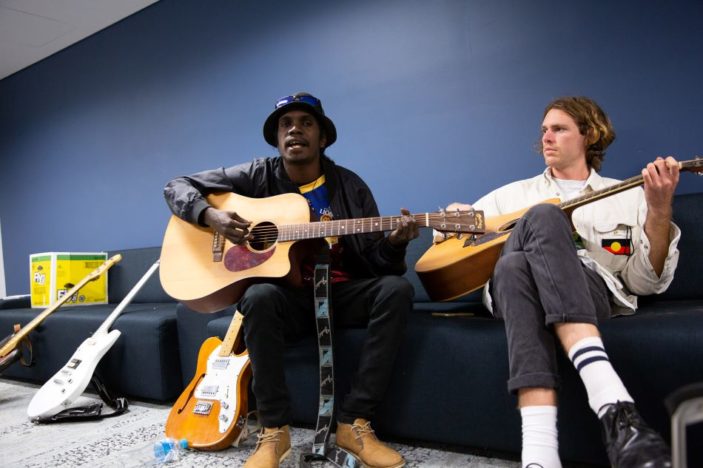 King Stingray is an exciting new 4-piece, from Yirrkala, North-East Arnhem Land. They play what it is described as Yolŋu surf-rock, a fun, loud raucous mix of indigenous melodies with undeniable surf, indie and funk influences. The first track to be released by this outfit is “Hey Wanhaka”,  a song about finding love in the city.

The band was formed by Yirrŋa Yunupiŋu, the nephew of the late Dr M Yunupiŋu, Yothu Yindi frontman, and Roy Kellaway, who is the son of Stu Kellaway, who plays bass in Yothu Yindi, and is a founding member. It’s fair to say that they have music running through their veins from an early age.

Dimathaya Burarrwanga plays the drums and percussion, and Campbell Messer is on bass and vocals.

“Hey Wanhaka” is a blend of English and Yolŋu Matha, with the band integrating the traditional Yolŋu manikay of the Lorrpu (white cockatoo), with modern indie sounds. It’s a tantalising mix, and I’m sure they will find themselves plenty of fans. The Yolŋu manikay (traditional vocals) never fail to impress, and they are showcased brilliantly in “Hey Wanhaka”. King Stingray is a great entry point to some of the incredible music that comes from Arnhem Land.

The band was spotted by The Chats, who happen to have their own record label, Bargain Bin Records, and signed them up. The Chats frontman, Eamon Sandwith said of having them on the label: “I’m very much looking forward to seeing them grow as a band and I can’t wait till we can hit the road and do some shows together!”.