Track by Track: Tijuana Cartel take us through their new album Acid Pony 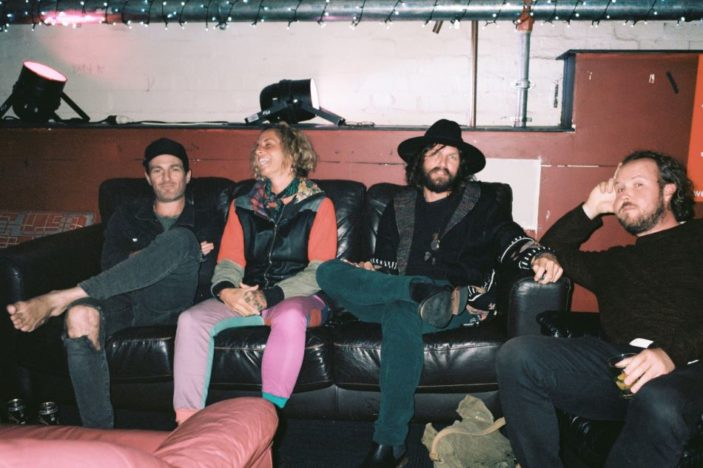 Earlier this month Gold-Coast based electronic dance band Tijuana Cartel dropped their latest album, Acid Pony. It’s a tantalising mix of a range of influences, whilst remaining guitar-driven with a danceable vibe. There is some psychedelia with grooves that never end, mean fat beats, and also some sweet vocals. It keeps shifting and changing, but always entrancing.

To celebrate the release of the album, the band has a massive tour organised around the country. The dates and link to tickets is listed below.

The band has put together a track-by-track breakdown of Acid Pony. So, press <PLAY> and read the background to each of the tracks that will get you up and dancing like there’s no tomorrow.

‘Sufi’
Carey, our electronic producer and keyboardist, became fascinated with whirling dervish dancers after watching a documentary on them. Apparently, the way they spin in those amazing spinning dresses they wear is analogous to the way a tornado or cyclone spins. He became so obsessed that he made an animation to accompany the music that follows the same principles of spinning motion. The song itself is very signature Tijuana Cartel sound, though I think you can really hear the new influence on our tasty production.

‘Minimal Stuffing’
This one was the song that never ended. Initially, I wanted to try something kind of short and with only a few elements to keep it going. Thing is, we just kept wanting to tweak it; or it wanted us to tweak it. Over a period of about a year it got longer and longer and more complex as a result. In the end it’s my favourite track on the album, and I’m kind of glad we can’t help but tweak out.

‘Strandzhka’
Way back when life was free… This track started in Bali, sometime before the pandemic. It started as just a guitar riff and a beat. At the time I’d email my parts back to Carey in our Gold Coast studio and we’d just keep emailing bit until it was finished. It’s a really great way to make tunes and I can’t wait until the border opens for us again.

‘Tommy’
We wanted a feel-good track for our live set, and at the time I was listening to a lot of lo-fi deep house and quirkier dance music. So, in a way this one was simple guitar riff, house kind of bass line and a straightforward 4 on the floor beat. Happily, this one seems to go down really well in the live set too.

‘Over N Over’
We hadn’t produced much vocal-driven music over the last few years, so I kind of wanted to have a crack at it. Like our other tracks it was recorded in several locations, at my place in the rainforests of Maleny, Bali and the Gold Coast. At the time I was thinking of what it’s like touring as I’m getting a little older, how things change, but how they stay the same. We went crazy with synths and synth feedback, and the guitar solo is one of my favourites.

‘Ishkur’
This one in a way, was easy for us. There are elements that we think define Tijuana Cartel, and they are all in this song. Darbuka percussion, nylon string guitar and extremely fat sounding beats. I’m hard pressed trying to remember how this one came about, but I remember having a ball making it

‘Middle Something’
This one came from elements of songs we had sitting on our hard drives for years. After a couple decades of making music, you kind of end up with a lot of spare parts. I really have to thank Seagate for making decent enough hard drives to last the time on this one.

Acid Pony is out now