Track By Track: Roz Pappalardo takes us through her new album Won’t Be Quiet 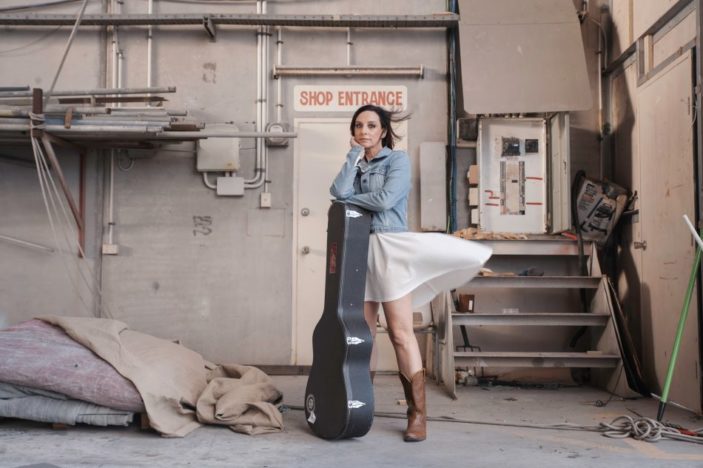 The career path of Pappalardo has been non-linear. She has a history encompassing acting, playwriting, as well as a singer/songwriter. Now based in Cairns, in far north Queensland, she is enmeshed in the local arts community, working on theatre productions as well as directing Tanks Arts Centre and Munro Martin Parklands in Cairns.

Roz is clearly someone who relishes being busy, as she has thrown herself into creating this fabulous solo album. In the lead-up to its release, 4 singles have trickled out, including the title track, “Won’t Be Quiet”.

The album is a wonderful mix of diverse styles, from country to rock to alt-country. A constant across each track is Pappalardo’s compelling vocals and the high quality of the songwriting.

Press <Play> and listen to Won’t Be Quiet from Roz Pappalardo, and read the background to each of the tracks.

Roz has been extremely open and very generous in sharing the stories behind the tracks on what is really a most beautiful album.

Immune
I’d just moved out of my home. Left everything. Picture this – me living under a friend’s house, standing on a concrete floor, sharing my bed with my dog, drinking too much red wine and watching endless episodes of The Walking Dead, imagining I was warrior woman, Michonne, from said HBO show, wielding a massive samurai sword, protecting my people from impending doom.

Let It Go (featuring Bullhorn)
This song is about wanting to be the change. It’s about a desire to do things differently in my life with bravery and passion. To listen to myself and to back myself. I wrote this song in less than an hour and I feel like a powerful roaring lioness when I sing it.

Life’s Like That (featuring Danny Widdicombe on backing vocals)
Is a nod to resilience, rolling up your sleeves, digging in for the long haul and hard-working people who do it all the time. Surrounded by strong people all my life, I come from a first-generation immigrant Sicilian family, who toiled on cane fields in Far North Queensland when they first arrived in this country in the 40s.

Working through tropical summers, with severe rainy seasons, cyclones and untold pestilence – no one gave up. The entire family, the women, men and children kept pushing through what would seem like the impossible at the time, because Life’s Like That. Today is a good day. We’re still here, reflecting and appreciating, with a smile. And good food.

Stand And Step (featuring Silas Palmer on piano)
A couple of years back I fostered a rescue pup from Morning Island. She ate all the shoes in my house, cutely slept on the piano (you had to see it to believe it), snuck her way into my bed, was supposed to go back to the foster agency after 10 days, but is now permanently etched in my life in every way. Joyful, happy, giving me unconditional love, expecting nothing from me but a feed and a pat. What a friend. Saved me really.

Sound The Alarm (featuring Salliana Campbell on strings)
I wrote this song in 30 minutes. I was sitting on the bed in a hotel room during a BIGSOUND two years ago. I’d finished delivering two of the biggest festivals in my region one after another, I’d flown across the country from Cairns to some remote town in North West Western Australian for what felt like a 30-minute conference and needed to check in at BIGSOUND on my way back to make sure I was still thinking about the Queensland music scene. I was wrecked. I was on the edge. I needed to raise a flag I think. Music allowed me the space to sit back, take a breath and reflect. This song allowed me to do that just in the nick of time.

Outlaw
At times I go through really fanatic running stages. Long-distance, listening to all the rock tracks I want to be played at my funeral, or ruminating on some self-help meditation expert.

I run through the historical Cairns Pioneer Cemetery. The stories of those under those crumbling stones keep me going forward, pacing and dreaming and believing I can.

Let The Chains Up (featuring Salliana Campbell on strings)
This is an intensely personal story for me, based on a series of conversations I had with my grandmother, Nonna, not long before she passed away a couple of years ago.

My Nonna, Carmella Pagano, spent seven years working as the stationmaster in the Sicilian mountain village of Piedmonte Etneo, while her husband, my grandfather – Nonno – was taken as Italian prisoner of war by the American armed forces. He was taken after a particularly brutal fight in Africa and, unbeknownst to my Nonna, sent to New York City as a prisoner of war. His imprisonment lasted seven years.

I imagine my Nonna letting the chains up to trains incoming and outgoing, at her countryside train station. For seven years she watched the alighting passengers, waiting to see whether Nonno would be one of the soldiers stepping off the train, not knowing whether he was alive or dead, whilst getting the next train ready to roll out of the station, taking the next wave of men away from their families.

Nonno eventually did come home… but this song focuses on the time my Nonna lived and worked at the train station and raised a small family solo, wondering, waiting, existing and hoping daily for good news.

While I find it hard to listen to the song without a tear coming to my eye, I like to think I’ve done her story a little bit of justice. She was a brave, resilient, loving woman, generous and giving to a fault, and spent the rest of her life dealing with my Nonno’s ever-growing PTSD which ended up, for him, in dementia and nursing homes. But not once did she complain. Not once did I ever hear her sigh or cry. She loved her family and every day was new, with a new adventure waiting for her.

Which Way Maryanne
This song is dedicated to one of the great personalities and biggest hearts of the region of Far North Queensland, Aunty Evelyn Lowah.

Aunty Evelyn Lowah was a well respected and much loved indigenous elder living in Cairns, who calls the Torres Strait Islands her country. I met Aunty Evelyn during an artistic residency I was deeply involved with, the Soldiers Wife project, which saw four female Queensland songwriters work with women who have been touched in some first-hand way by military conflict in this country.
Aunty Evelyn had a story she wanted to share. She came to my house … I made her a cuppa and a sandwich … and we listened.

She grew up in Darwin, where her father served in the military, during WW2. As a baby, she and her mother were evacuated to regional South East Qld during the Bombing of Darwin in 1942. It seemed from that point, that military life ran in her veins and when she reached an appropriate age, she asked her parents if she could serve in Mosman Barracks, NSW. Her parents were only too happy for her to leave her surrounds (Pimpama, South East Queensland) and experience life outside of her community, as she’d fallen in love with a boy ‘from the wrong side of the tracks’ and Evelyn’s parents thought that serving in the military, and conveniently ‘leaving home’, would allow her to experience different pastures.

Maryanne (Evelyn’s mother) was right … and wrong – Evelyn served between 1960 – 1963, at all times maintaining loving contact with the ‘boy from the wrong side of the tracks’, who eventually became her husband.

Which way, Maryanne? Maryanne, Evelyn’s mother, finally relented to the relationship, approved of the marriage union that lasted long distances, various boxes of love letters and cards, and a three year break …. thus a soldier’s mother and daughter’s story lives on. Lieutenant Aunty Evelyn Lowah was the first indigenous woman from Queensland to serve her country.

An angel to all whom cross her path, Evelyn Lowah was a gentle and loving woman, with a wise and kind-hearted word for whoever was in need.

Won’t Be Quiet (featuring Deb Suckling on backing vocals)
Once again, a tribute to a resilient and inspirational woman who recently crossed my path. Althea Constant-Towers, whose story of love and courage despite time, distance and fatal illness shot this song to the top of the list when it came to naming this album.

I met Althea on an 18-hour train trip from Brisbane to Townsville as a songwriter documenting the trip of 4o War Widows doing their annual pilgrimage to Friendship Day celebrations in Townsville. The love of her life died due to what Althea and family can only put down to Agent Orange, after Graham served in Vietnam, and then, after his return to Australia and family, was undiagnosed with an awful debilitating illness until his passing. This undiagnosed mystery disease has been passed onto Althea and Graham’s daughter and in turn their grandchild.

Althea shared with me that she is tired of pretending and lying about what her husband died of, and why members of her family are sick. She told me she won’t be quiet anymore. And if someone asks, she will tell them.

You Don’t Love Me (featuring Danny Widdicombe and Bullhorn)
Part love song, part tongue in cheek, part power trip set in the 1950s…. I wanted to get right back to basics with this track but when the idea came to me to incorporate both Bullhorn and Danny Widdicombe, well who cares about basics!? I wrote this song on a massive drive back from Tamworth Country Music Festival to Cairns. I was driving away from a week of intense shows, away from a broken heart back to Queensland to mend a family situation. The things we do for our loves and our lives.

Johnny Byrnes
The stories that a trip to Roma will unearth. A bush ranging descendant tucked away in a nursing home, just bursting to show someone his photos, proud to tell his story and honour the women in his life. Particularly, his grandmother who achieved the impossible and managed to get her son home to the region of Roma, and laid to rest in the midst of World War I, to be eventually honoured in the Avenue of Heroes in Roma, the street now lined with 100 bottle trees. Inspirational people continually show themselves, near and far, stories of them and their country, their strength and their kin.

Satellite
This song was written during a community engagement in the depths of Cunnamulla. Accompanying young people back to country, documenting the process and resulting in much writing, laugher and tears of reuniting with country. The stars are brighter out there. In Cunnamulla.

California (featuring Anthony Dettori)
This song is the launch pad of a brand new project that I hope you’ll hear about soon – a co-write and duet effort with Anthony Dettori from The Sunburys, and myself. This is Lontano.
A random message from Anthony inviting me to sing on the new Sunbury’s album resulted in me sending him a draft of this song, recounting some stark memories of a recent community engagement trip to California. That process has propelled a whole project of songs that have just welled up inside of us. Keep your ear to the ground for this new artistic endeavor. Songs of distance, heartache, travel and love.

Won’t Be Quiet by Roz Pappalardo is out NOW. You can purchase the CD and Vinyl HERE