Track by Track: Grace Sanders takes us through her captivating EP, Nothing Is Personal 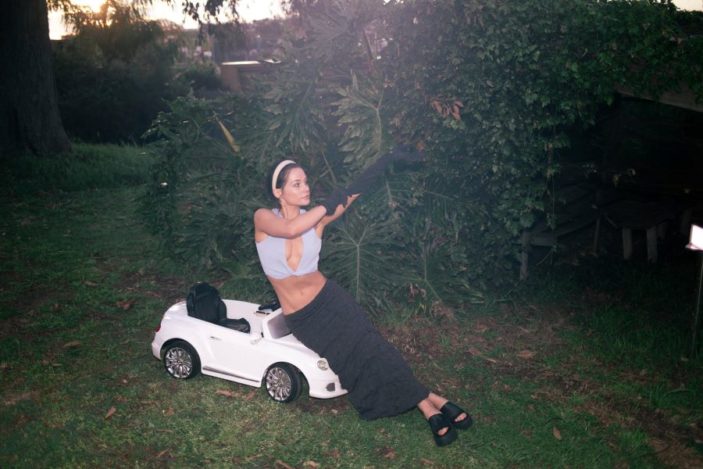 Perth’s electronic/pop artist Grace Sanders has today released her second EP, the captivating and intimate Nothing Is Personal. The material on the record was inspired by the trauma associated with the breakup of a long-term relationship.

It’s an intimate record, with all the feels that you would expect from these events, but it doesn’t dwell in minor keys and hang-dog sadness. There’s creativity and a feeling that there is a light at the end of the tunnel. It is the full journey of grief, loss, anger and self-acceptance, interspersed throughout.

The record was co-produced and co-written with Ezekiel Padmanabham. The soundscapes are dramatic and cinematic. There are unexpected twists and turns, highs and lows, lofi moments countered by great theatre. This is a bold and exciting release from the pair.

To celebrate the release of the record, Grace has written for the AU, a track-by-track breakdown of the EP. So, do press <play> and immerse yourself in the fabulous Nothing Is Personal.

Grace Sanders – Nothing Is Personal -Track by Track

The EP thematically revolves around the breakdown of a long-term relationship; examining each stage of grieving and the different aspects of identity this experience reveals. As the narrative evolves, so too does the nature of the music; allowing the second half to open up into less polished acoustic instrumentation with purposeful imperfection. I imagine taking the listener on a journey- out of the garden gate and into the streets where this record can be a step-by-step soundtrack for reflection, feeling and closure.

I wanted to make the start of the record feel reminiscent of the beginning of a film: you press play and go for an evening adventure, with lots of shadows and mysterious noises and things lurking just out of vision. I recorded the opening track initially with layered acoustic guitars, but Zeke suggested we reference Plantasia by Mort Garson instead and make it feel more compositional. This ended up working more cohesively with the classical instrumentations that are scattered throughout the EP, and also with our idea to make everything begin in an entirely electronic place and evolve to acoustic.

a year and one day

This song started as a melodic poem- just two verses that looped around in my head at a time I deeply felt the wound of an anxious/avoidant attachment cycle. It needed to feel really cold and sparse to highlight that hurt and confusion; of being pulled closer and pushed away and never really understanding why. We worked on the song in sections for about a year and it slowly revealed itself as my feelings and Zeke’s production references evolved in tandem too. I think allowing space ended up giving the music a new meaning, and facilitated it to tell a more nuanced story. The last thing we added was the backing vocals we sang together on the last chorus; I thought it was a symbolic way to round it out because the first and last song are the only two that have BV’s recorded by Zeke and I in the same session. It feels like an easter egg for emotional closure.

“video game” was our version of if Todd Terje and Soulwax made a tense, anxiety-driven pop/dance track. It’s meant to feel like you’ve had three too many coffees and there’s a tightness in your chest and everywhere you go you feel you need to be somewhere else. I wanted to put all those paranoid, irrational thoughts into a song and into the context of fearing you’re being given a half-truth. Zeke is a genius and completely elevated the concept into a symphonic, intense, beating dance track that is probably our favourite moment in the live show.

I wrote this song while I was walking home from work, and I started singing the phrase again and again: ‘I don’t want to be this way anymore’. It brought me to tears how succinctly and profoundly such a short sentence could summarise so many layers of exasperation with my position in life. I didn’t feel I had autonomy in my relationships, I didn’t know if I actually liked myself, I didn’t know what made me happy, I didn’t know how or what to change.

There was a long period between that genesis and when Zeke and I started working on the track in the studio- which allowed it to take on a new meaning for both of us when we approached finishing it. I always knew I wanted it to be a heavier dance track- as I feel dancing is such a tangible expression of emotion. Honestly, though- the studio process I think almost broke Ezekiel’s brain… but maybe that’s perfect for the song?

‘nothing’ mourns expectations that can never be met, and verbalises the emptiness that accompanies reconciling the space between your intentions and the reality of the outcomes.

I usually write on guitar- but immediately Ezekiel knew he wanted to use synthesisers and pianos to flesh out and soften the production. We were channelling Frank Ocean, as he has the unique ability to be intricate yet bold with his production in such a way as to let the song breathe while still incorporating interesting and complex layers.

We wanted the beat to feel laboured yet persistent- like scuffing your sneakers on the pavement as you drag yourself home after a long night.

The final section I feel is a stroke of genius on Ezekiel’s behalf. The way the strings lift and soar over the revelation that all we can do is guess, be humbled, and keep trying is a really beautiful turning point on the record. I hope listeners find solace in its meaning and enjoy the little details- like my neighbour’s dog barking and Josiah (who contributed piano to the track) laughing.

“attachment theory” explores the ways in which our childhood relationships inform our ability to connect with others throughout our lives, creating a ripple effect that extends out from those earliest experiences. The theory explains how our relationships and breakups in adulthood can mirror those early experiences and become an avenue for reflecting on the version of ‘self’ we become in the context of ‘others’. This song came together within the first session- it knew exactly what it wanted to be immediately. We deliberately kept all the little imperfections- guitar mistakes, studio chit-chat and external noises as a statement and turning point in the EP. At this stage, we let the messiness and chaos of life become a feature and a reality, rather than something to edit and conceal.

This track stands in full contrast to “(opening)” as the most ‘raw’ and acoustic on the record, with lyrics that describe reaching closure and production that is soft and uplifting. It took me 366 days to find the courage to end a toxic relationship, and 210 days to move on and become open to love again.

All the interludes are outtakes taken from an interview I conducted with my ex-partner (after 6 months of no contact) about whom a lot of the experiences were inspired by. The title of the album ‘nothing is personal’ is meant to be ironic in the sense that the themes are obviously extremely intimate, and yet not about me at all. Ultimately what happens between people is usually more about what baggage each individual is carrying. I wanted to give a voice to this person to demonstrate this theme and challenge myself to live by it.