Track By Track: The Phoenix Foundation take us through their new album, Friend Ship 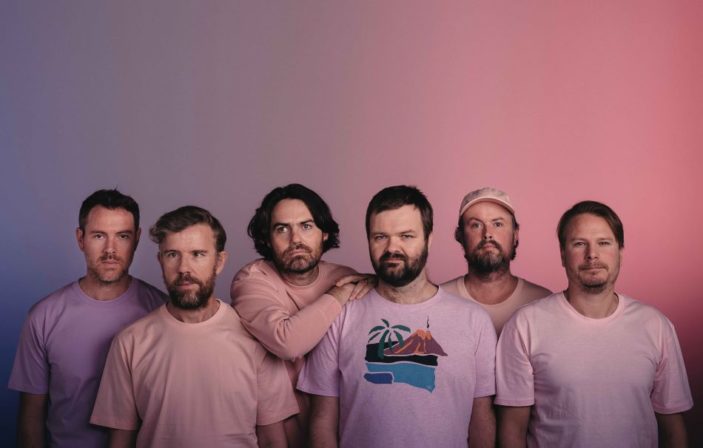 It’s a wonderfully diverse album, an indie-folk extravaganza boosted with additional firepower from world-class vocalists. The New Zealand Symphony Orchestra also feature on two of the tracks. It might have taken five years for this album to come out, but it was worth the wait.

We are lucky enough to have a track-by-track breakdown from two members of the band, Sam Scott and Luke Buda. It contains some fascinating insights to this beautiful record, so do take a read and press <PLAY> and have a listen to Friend Ship.

“Guru”
SAM – I had the demo for this song but it was a bit shit and Conrad and Luke came over and told me to work harder on it so I did and it got real good lol. It was great fun recording that insane percussion world with Will in Dave Dobbyn’s garage studio. Tom Callwood really goes crazy on the bass in this, it pumps. Also I get to play lead guitar which isn’t usual in TPF, definitely channelling some Television vibes. The lyrics are about the western desire for a quick fix dip into appropriated spiritualism and how if you really wanna feel the pulse of something deeper you have to open your eyes to death and chaos and the end of all existence. Or something like that.

“Miserable Meal” with the NZSO
LUKE – I sat down at a piano with the thought “How about some fancy Elton John chords?” and here we are. I had a great vision for a video for this that will never get made which is me doing chores in some dirty long johns and house t shirt. The video no one knew they needed.

“Hounds Of Hell” with Nadia Reid
SAM – I can’t believe we got Nadia on this! I’m a big fan. Her voice carries such authority. It’s not often a TPF song stems from a harpsichord motif but that’s what happened here. Lyrically I am talking about a love so true it could survive the impending doom of climate change. Really fun stuff like that. And it has lots of references to Danté’s Inferno because I’m a really pretentious twat.

“Decision Dollars” with Hollie Fullbrook
LUKE – I think this was gestating for about 5 years. It took me a long time to accept such unbridled power and passion into my life. But now I have fully embraced it. My partner loves singing it at me when I am humiliatingly hung over.

“Transit Of Venus” with the NZSO
SAM – I wrote this song in my kitchen while my wife did the dishes. She found that quite annoying but now she likes the song (even though she hates whistling) so it was worth it. Chris and I recorded the drums for this one sneaky evening in Roundhead when I was there working on Neil Finn’s album Out Of Silence. Thanks Neil, your cheque is in the mail.

“Tranquility” with Hollie Fullbrook
LUKE – Conrad has about 1000 tracks just sitting around waiting for Sam and I to put words to. Something about this one immediately got me, the space and quiet confidence of it. I wrote the lyrics and recorded these vocals in one session (very rare for me) at my German puppeteer neighbour Norbet’s house (Thanks Norbet). It’s great to reconnect with renowned NZ experimental music explorer and improvisor Jeff Henderson, who plays clarinet. The funny thing was that Sam recorded some clarinet on the track first and he said “I tried to play like Jeff.” and then when we got Jeff to play on it Jeff said “I liked what was on there so I tried to play like that”. So Jeff is trying to sound like Sam trying to sound like Jeff. The circle is complete.

“Landline”
SAM – This was a very last minute inclusion on the album but it was maybe the breezy number it needed. It’s fun and silly but it’s also just about trying to stay connected with each other in a meaningful way when we are just bombarded with non stop CONTENT and news and chaos. I love getting random calls from old friends (or new friends). Call me anytime, anyone.

“Former Glory” with Anita Clark
LUKE – Darryl bullied me at Clyde Quay School in 1987. I had just arrived from Poland, I couldn’t speak the Queens English. Anyway he tortured me a bit and mostly got away with it. One day he grabbed my bag and threw it on the ground and stomped on it, crushing my lunch. That was a big mistake. When I wrote this I didn’t think about how intense it would feel to sing the lyrics to other people.

SAM – I think this song is a great work of real storytelling. A band origin story and also a reflection on the immigrant experience that Lukasz had as a child. “I started a band with my best friends, and it was this band.” Perhaps that’s where the album title stems from, not consciously but it makes sense.

“My Kitchen Rules”
SAM – This is my favourite drum sound ever. Chris’s drum heads are 90s years old and they sound so weird. “People watching people on their best behaviour, in the dining rooms of human strangers.” Conrad can write some very cool lyrics, he doesn’t do it often but when he does it’s never what you expect.

“Trem Sketch”
SAM – I can’t really explain it but I feel like this song is a sequel to “Wildlife” which is the last song on our first album. Very much about those late night hangouts where everything feels perfect so you don’t want to go to bed because you know that perfection is always slipping away from you. The next day everyone is tired, that magic is gone and you have to get back to normal life. I wrote it over a lovely piece of Conrad’s and we got our great friend Tom Watson to come play some ambient trumpet. It was a really fun session. Everything on this album was really enjoyable to make, none of it felt tense or tiresome. That’s pretty unusual and I think you feel that in this song, it’s like an exhalation of breath after a long, purposeful conversation.

Friend Ship is out now via The Phoenix Foundation/UniversalNZ on all major streaming services.