Canadian bluegrass four-piece The Dead South are heading to Australia and New Zealand for the first time ever this month, supported by The Hooten Hallers. The sold-out tour will see the beloved band play seven shows back to back up the East Coast, returning to Northcote Theatre in Melbourne before two shows at Auckland. Due to popular demand, a second show at Fortitude Music Hall in Brisbane on 26 Jan was recently added (get your tickets HERE).

Their highly-anticipated debut live appearance Down Under comes after a largely sold-out 58-date North America and Europe tour in 2022. It’s a wonder they haven’t visited sooner since Australia ranks in their highest streaming demographics; Sydney, Brisbane and Melbourne take out their second, third and fourth most popular cities by monthly streams worldwide.

To get in the mood for the tour, The Dead South have offered to share some of their favourite Aussie slang terms and phrases.

Crikey – Do people actually say this?

Barbie – When I was a kid, I thought people were talking about putting a shrimp on top of a Barbie doll.

Arvo – I still have no idea what an arvo is. An afternoon? An argument? An event?

One for the Road – We say this one in Canada too, so we named our tour after this phrase.

The Dead South are an ensemble of banjo, mandolin, cello, guitar and catchy vocals with a twang, combining elements of rock and folk with a modern twist. With a platinum-certified album (Canada), gold-certified single (USA) and two Canadian JUNO Award wins, the quirky quartet have also received airplay on blockbuster TV shows Umbrella Academy and American Gods and performed at iconic venues Brixton Academy and Red Rocks Amphitheater. 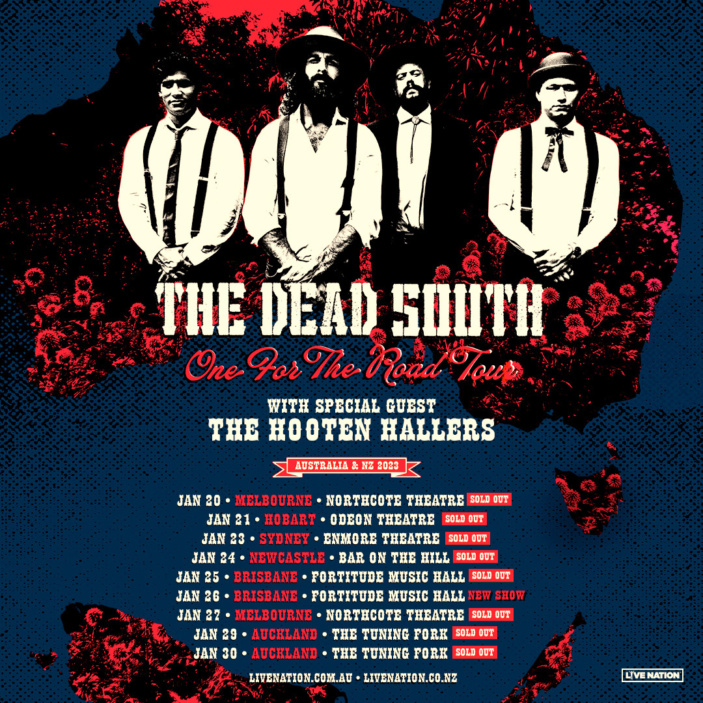 Renowned for their electrifying performances, the overwhelming support for the One for the Road Tour proves that this is not a show you want to miss.