The 10 Greatest Discoveries at The Great Escape 2019

The Great Escape has come and gone once again in Brighton, showcasing some of the world’s most exciting up-and-coming acts, alongside established stars who once were emerging acts at TGE themselves: Foals, Lewis Capaldi, surprise act Shame and even Australia’s own Confidence Man who attracted some of the biggest lines of the week. But ultimately it’s about the discoveries. Here’s ten acts who caught my ear at this year’s event, from all over the world.

While at the opening night party, I caught this Brighton trio, who have taken the 90s Grunge movement as their own, not dissimilar from what Violent Soho have done in our own country (with a bit of added Placebo flair for good measure). There was an easy joy (no pun intended) in watching the band, who stoked the nostalgic fires while making accessible, fun music that was very much their own.

Also from Brighton, this six piece blend jazz with funk and soul to create a super fun live experience. I don’t have too much to say about this band except for that, and that I really love the name. The sort of band though where the only way to experience them is live.

Celebrating the release of his debut LP this week, Belgian artist Warhola delivered an excellent set with two drummers and two synth players. It really brings the music to another level – extra dimensions added to the music making it as engaging as it is technically impressive. Just try not to dance. You’ll fail. For fans of artists like SOHN.

One of my most anticipated sets of the festival, Pongo was an immense talent who got the whole room dancing and singing along, in spite of the lyrics being in her native tongue (Portuguese). She proclaimed “welcome to the party” to the crowd as she ran through tracks like her single “Kuzola” and the title track off her record “Baia”. A a party she did deliver. The instant international love her music attracts reminds me of Bonde do Rolê, where language provides no boundary for a good time. She performed with a drummer and someone on keys and the rest – so a pretty simple set up. But accompanied by her incredible vocals and stage presence, it made for a powerful and engaging live show nonetheless.

Hardly a discovery, but their appearance at The Great Escape brought to an end the Canadian band Mother Mother’s first European tour in some 8 years – and the group, who play to massive crowds all over North America, are hardly well known in this market. 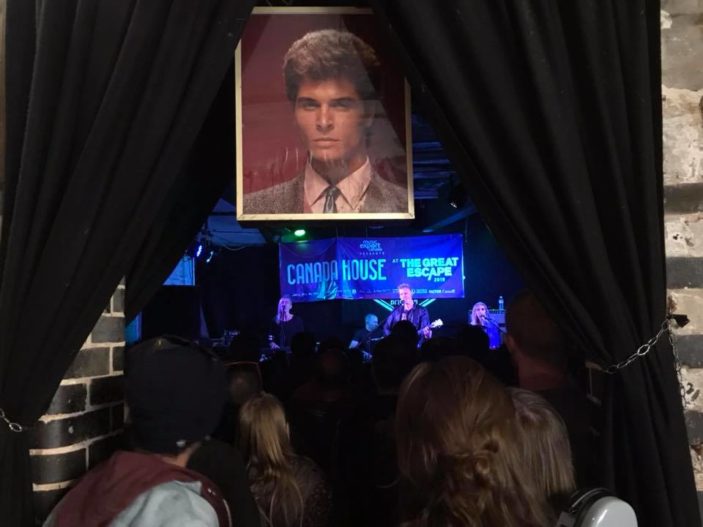 Australia is no different… so for those unaware, Mother Mother are a tight, fun Canadian five piece ready to make their mark in the UK after 7 albums. Their new song “Bottom is a Rock” off of their 2018 release Dance and Cry was a highlight, as was their new single “Get Up”, proving that their new record was meant to be experienced live. If you’ve missed the boat thus far, this is a band you’ve gotta make sure you get behind.

With vibes of classic acts like The B-52s, The Clash, Devo and an energy that I could equate to the likes of Slaves, with tonnes of cowbell and trumpets for good measure, Squid is tasty. The Brighton act were one of the most talked acts of the festival, with the quintet’s drummer doing most of the singing. It’s a lot of fun, to say the last, exemplified by their closing song, which I’m pretty sure their last song was about houseplants?

Yes, it absolutely was about houseplants.

A buzz band out of SXSW, the demand to see this band was massive. Playing two shows on Saturday, I was lucky enough (in other words, I lined up for an hour) to see their more intimate show in the afternoon. Trying to describe them is a difficult task for any music journalist, but here we go…

A synth intro played over the speakers before they walked on stage, and “are you ready to rumble?” came through a pre-recorded musical jam, as strobes attacked the crowd. An onslaught of noise followed, two of the guys wearing cowboy hats, leading into something that sounded as much like a Tool track as anything else, heavy on the bass. Then the rhythmic drums and guitars that follow feel like a heavier version of Battles, but a bit more “Jazzy”, if you can take my meaning. And all this was within the first five minutes.

It was an inspired, memorable and completely original live performance, with only a couple of moments sticking out in your mind musically – but catchy jams are not what they seem to be trying to accomplish. Rather, in the realm of BADBADNOTGOOD and the like, they are here to create an oft-hypnotic, intense live experience that’s hard to ignore and impossible to forget. A band worthy of its hype and then some – but you’ve got to experience it live.

Sweden’s Two Year Vacation were summery, fun and got the room dancing at their Alternative Escape showcase. They are easily compared to the likes of Foster The People, and I could see them commanding massive crowds as Summer festivals around the world with their catchy tropical pop jams. Surely would go very well in Australia, no?

The last band I saw at TGE 2019 was The Visual, a Netherlands three piece who brought up comparisons with My Brightest Diamond – but occasionally taking it louder, as the drums and the keys melded with the guitar to create some face melting moments as their songs built beautifully. Other times, Brandi Carlile or The Decemberists came to mind as a reference. But they’re very much their own creation. Definitely a band to check out.

I’m finishing things off with an Australian outfit, because they were the only Aussies I caught at TGE who (incredibly) I’ve never caught live until now. In short, Nice Biscuit (pictured in the article header) totally blew me away. With two front women playing guitar, maracas and tambourine, buoyed by their excellent vocals, and backed by four exemplary musicians, all dressed in worksmen onesies, and delivering a unique take on psychedelia, Nice Biscuit are undoubtedly one of the most exciting acts in Australia right now.

The Great Escape was held in Brighton, England from the 9th to the 11th of May, 2019. For more details about the festival, and early bird tickets for 2020, head to greatescapefestival.com.