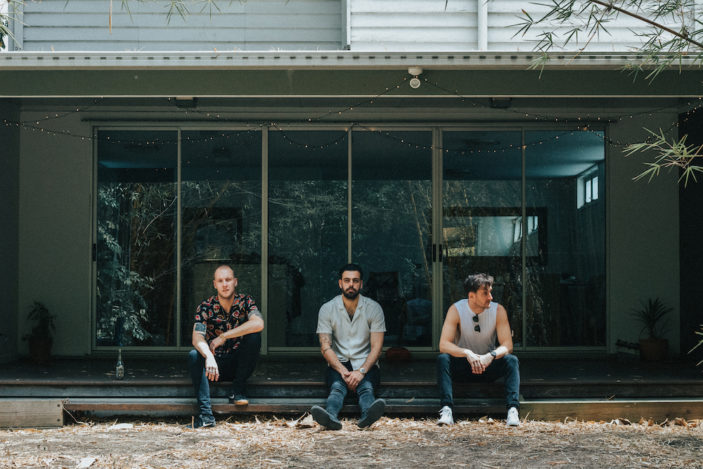 Melbourne-based trio Brixton Alley may be exploring new territory, but they’re shredding up a storm.

Relocating to Australia from the UK in 2020, the indie-punk band got the chance to play at some of Australia’s hottest venues, before being plunged into lockdown. Like most artists, lockdown gave the trio a chance to focus on their sound and music, which culminated in the release of their EP 303 in January.

The mischief-makers have also just released the music video for their recent single, “This Party Sucks”.

To celebrate the launch of the video, and their new home, the band has put together a playlist of their favourite tracks from their favourite Aussie bands. Press play, and work through their selections below:

This song is basically the soundtrack to our lives. When it comes on, it just puts a smile on our faces and makes us think of good times with our mates. It’s such a feel-good tune, we play it on repeat and just belt out the chorus!

SUCH A CATCHY CHORUS! Bugs have such a way with lyrics, telling authentic stories with super catchy melodies and we love it. Lead singer, Connor’s Aussie twang is just so cool.

Another banger from Bugs. This one hits home as it’s a clever look at the irony of people moaning about things being bad, but then not being happy when they’re good. We’ve all been guilty of that at one point or another.

Any band that finds a way to get the “C-word” into a song and have it played uncensored on prime-time radio gets a massive thumbs up from us. We love the Dunies!

A bit of a heavier one, but the chorus just slams on this song! The big riffs and screaming vocal melody make it one we love to mosh along to.

Hilltop Hoods were our first introduction to Aussie hip hop. We discovered them back in the UK through their iconic track “Nosebleed Section” and loved them from the off. “I’m Good?” is not only a sick tune, it also captures the struggles of 2020, a time when we had our ups and downs. But knowing that we weren’t in it alone really helped.

After discovering Hilltop Hoods we came across Bliss n Eso. Rap and Hip Hop have been influential in our song writing and we’ve been known to include Eminem mash-ups in our live shows. So finding Bliss n Eso and discovering another Aussie artist combining slick rap verses with sing-along choruses has been really interesting and we love what we’re hearing.

This song reminds us of growing up in the UK and watching some of our favourite films like Lock Stock and Two Smoking Barrels and Snatch. It has a real Guy Ritchie film feel about it, with tons of attitude.

Probably the first Aussie band song we really listened to back home in the UK. “White Noise” has been a regular on our playlists for a while. Again, a massive catchy sing-along chorus just gets this song stuck in your head for days.

These guys are absolute legends. Up-and-comers from the Gold Coast, “My Friend” is just such a lovely song about friendship and appreciating life. It reminds us that things aren’t always easy, but good friends are there for us no matter what. An important message in this day and age – too often we focus on things that aren’t actually that important and judge ourselves based on how others portray themselves, especially through social media. “My Friend” is a reminder that there’s more to life than that and we should enjoy “the places we go and the people we meet.” We’re big fans of that. If you haven’t heard of Local Safari, check them out, they’re bloody great.