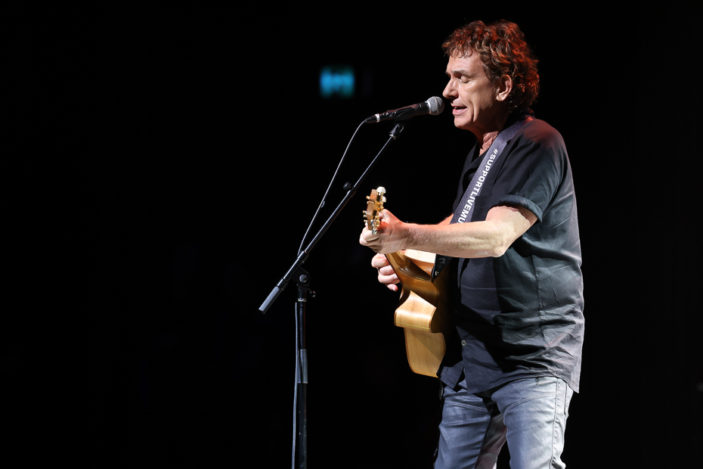 After being closed for eleven months, due to renovations and the pandemic, it was a triumphant re-opening last night of the Enmore Theatre, for the Sounds Of Sydney gala event.

It was an incredible lineup, with profits from ticket sales being donated by the venue to Support Act, an organisation that is providing much-needed support to the music industry during this time of crisis. The renovations are spectacular – and the theatre is a shining jewel amongst concert-venues in Australia.

Every artist on the bill delighted and entertained.

Julia Zemiro makes the difficult look easy and was the perfect host for the evening.  She calmed the nerves of performers who hadn’t been in front of an audience recently with aplomb.

The Choirboys had us heady for nostalgia. Milan Ring shone brightly, and Urthboy was a heady cocktail of strength and humility.

Andy Golledge and his good friend Caitlin Harnett are amongst the hardest workers on the Sydney scene, and certainly amongst the most entertaining – and it was a treat to see them on stage in this beautiful theatre.

Rapper Barkaa delivered an incredibly moving and powerful performance. For many, it was the highlight of the night.

Alex The Astronaut charmed as always. Red Riders delivered their old-school rock-and-roll with their youthful energy.

Isabella Manfredi of The Preatures shimmered on the piano.

Tim Freedman brought his beloved songs of the inner-west to the stage.

Finally – it was Ian Moss to bring it home, and sing of Bow River.

It was a fabulous night and much thanks to the Enmore Theatre and Century Venues for putting it on.

Bruce brings you these photos of the Sounds of Sydney gala event.