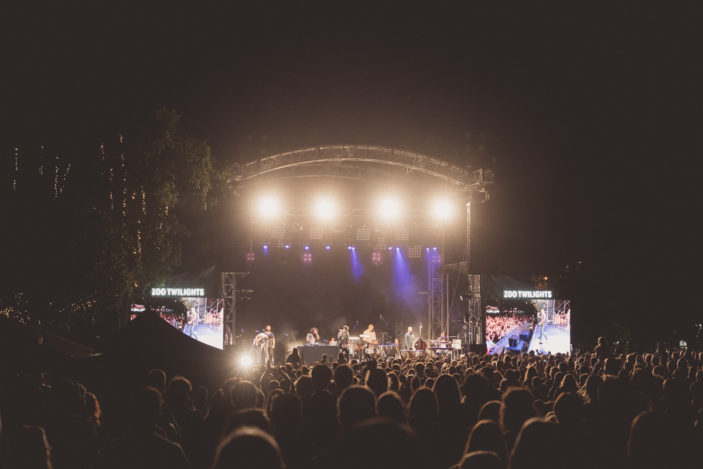 It’s been an exciting year since The Cat Empire’s last appearance at the Zoo Twilight shows of 2019. They have toured to sold-out venues around the country, released their album Stolen Diamonds and frankly had a little bit of fun around Australia as they toured. Luckily for us, the band has graced Melbourne Zoo again, selling out three nights and setting up amazing experiences to almost nine thousand people. Thankfully, Sunday’s final performance was lacking the punishing rain of the previous nights and as such the full force of The Cat Empire’s fans took to the Zoo.

The Cat Empire was opened by the vocally brilliant Emily Wurramara, the young Warnindhilyagwa woman graced the early evening with magic and stories weaved from her voice and guitar. Instrumentally, Emily was in contrast to The Cat Empire sporting only a guitar, but this was more than enough for her to entertain the swelling crowd of fans packing into the stage grounds. Her set was full of emotion, no more so than a song dedicated to the discrimination and fight-back of her mother in her youth, Emily was full of pride on stage, with good reason as she warmed the zoo up before The Cat Empire.

The Cat Empire themselves put on a masterclass of both music and performance, using their lengthy ninety minutes set to bring all of the goodness from the music the band has worked on over the years. Their most recent album Stolen Diamonds, released early last year was featured throughout the set, having the most songs played off of it.  It was also nice to see Felix, Harry and Co. blow off the cobwebs to bring out some of the old classics from previous albums; Two Shoes and Steal The Light.

With more modern works such as “Stolen Diamonds”, “Oscar Wilde” and “Kila” featuring in the early moments of The Cat Empire’s set it was clear that the recent Stolen Diamonds album was still on the forefront of the band’s mind. There were also shining moments off earlier albums such as “Two Shoes” and “Brighter Than Gold”. It’s not always the vocal work of Harry or Felix that draws the crowd to The Cat Empire, with the Melbourne group well known for their festive fusion anthems and infectious energy, causing a ruckus in the dance carnivalesque dance pits that form at the performances. It’s this energy that has kept the crowds coming back for more year on year, as they continue to grow their musical influence and fanbase near twenty years on from their initial 2003 release.

Walking back on to heavy applause the much anticipated (and planned) encore came into motion with a throwback to The Cat Empire’s incredibly popular recording “Hello”, having played it the night before, at the behest of the crowd, Felix again pulled it out on Sunday night, admittedly a touch tighter than the night before. It was wonderful to experience a fan favourite from so long ago, and something rarely played by the band in their modern era. Of course, they weren’t done with the old favourites though, closing out the entire night on “Chariot”, the song about the power of music. This brought the loudest cheer of the evening with a spattering of instrumental breaks with the crowd’s rhythmic dancing bringing the night to its end.

Four and a half (out of five stars).