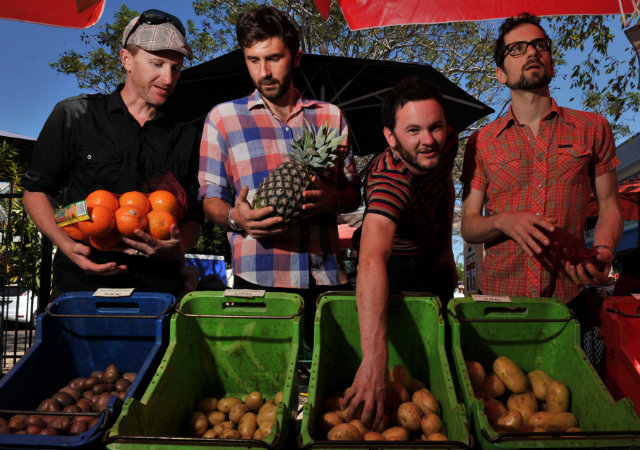 Playing to a (fairly adoring) home crowd, Darwin’s Green Stone Garden are back on stage for their first gig of the year, fresh from the studio and channeling a new sound. Most importantly, they come armed with some much anticipated new songs, including ‘The Island’, pegged to be the single when the EP North is released later this year.

Swollen beads of condensation run down the sides of our schooners and fall to the floor, splashing our toes, while building clouds remain excruciatingly unbroken. The Darwin four-piece are back in town after time spent recording with Steven Schram, and something new has emerged from the time spent – as the locals call it – ‘down South’.

Along with recording the EP, existing songs were rearranged in the studio by Schram, and re-rehearsed for live performance. In this new incarnation, the Schram makeover transforms the band’s indie-folk style to reveal a darker shade, with a new emphasis on keys (Marcel Zimmet), reverb and percussion (James Gough).

It’s a sound that looks back, with overtones of the 80s; Joy Division, New Order and The Cure – all a nod to likely early influences of the band’s members. A download preview of newly recorded ‘Beautiful Disgrace’ – in its original form, languid as molasses, with a reggae tempo and a killer Zepplin-esque riff – reveals more of this new sound. While frontman Mike Meston’s pathos-hued falsetto and delicately placed harmonies still form the melodic spine, the overall effect is razzed-up by a louder, braver, boomier, crashier sound. Layered with analogue keyboard, at times Abbey Road-style reverb on Meston’s vocals, impossibly low, slow bass (Paul Dopper) and the psychedelic jam towards the song’s end, this laid back sound of the tropics is anchored firmly to alt-rock.

They are an excellent fit for the support act, a new electro outfit, Analechi whose bass-heavy, nu disco sounds are nostalgic for dance music of the 70s and 80s. Made up of Lauren Day and Jeremy Conlon, the pair’s tools consist of two synths a drum machine and vocals, and for such a pared back kit, the duo fill a room with a sound that treads an irresistibly danceable line between dirty and fun. It’s difficult music to play to people’s backs, though, and as the support act at the Rails – more mainstream and quite a bit older than at their usual stomping ground at the artist-run Happy Yess – they were given a tough crowd to open. But despite the disinterested room, not yet in the mood for a dance (and infuriatingly sitting on the floor), they played their set as if to a roaring outdoor festival crowd, and nailed it. Look out for an EP in the works.