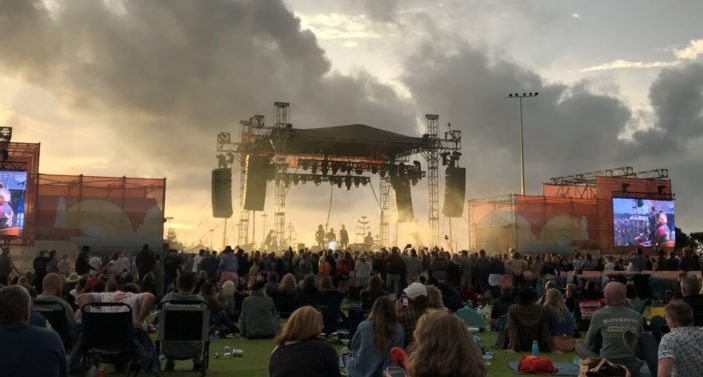 “I thought this revolving stage would be a nightmare but it’s awesome,” Eskimo Joe singer Kav Temperley exclaimed two songs into their set at the ground-breaking Good Day Sunshine Festival in WA’s south-west region on Saturday, in a ringing endorsement.

It was the question on everyone’s lips. Festival organisers Macro Music had created a world-first COVID-safe set-up with four separate cordoned-off crowd areas surrounding one central stage, which revolved like a turntable, with virus spread risk mitigation in mind.

Some would call it the festival of the future, or at least the foreseeable vaccine-less future.

Its execution would be a curiosity for many, not least the artists, but before too long it was practically forgotten, with the music taking charge at the Busselton Foreshore.

The quartered set-up meant queues were short, while the well-located big screens aided if the artists’ backs were to you. And the music was good… even if there were a few sound hiccups.

The majority of the crowd, which varied from youngsters wanting their long-awaited festival fix to older folk enjoying some live music with a wine on a picnic rug, seemed content taking it all in until later for the main acts Eskimo Joe, Xavier Rudd and John Butler on an overcast afternoon. 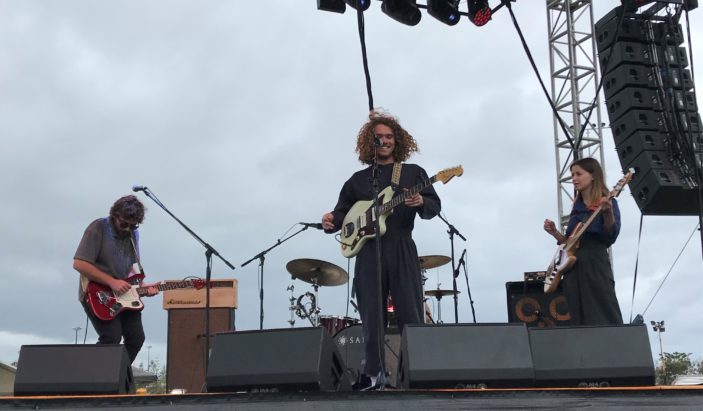 In the meantime, WA locals Moon & Honey and Dulcie followed by Noah Dillon warmed up the mellow crowd, although the latter was interrupted by the first of a handful of sound issues which was another headache for Macro CEO Ross Macpherson.

Mane-haired Dillon and his band patiently waited for a fix, with smiles on their faces, before finishing with an ode to enigmatic Hollywood actor Matthew McConaughey.

Vikki Thorn of The Waifs, put on a set of grace alongside her talented neighbours Simon and Tammy London, the latter adorned in an unmissable red dress. The chemistry on stage was infectious but the standout was Thorn’s voice which was as good as ever, along with her harmonica.

Eskimo Joe stepped on to the Turntable Stage late in the afternoon as the sun began to set and instantly got the crowd on their feet and jumping, in a COVID-safe way as Temperley insisted, with popular opener “Sarah” followed by “New York”.

Ever the showman, Temperley was quickly won over by the turntable, embracing the unique situation and likening it to a U2 arena show, while guitarist Stuart MacLeod floated a competition between the four crowd areas, with the winner to have the final song sung in their direction.

It was light-hearted disarming banter, backed up by an energy that took the audience up a level. Eskimo Joe finished off strongly with old faves “Black Fingernails, Red Wine” and “From The Sea”. 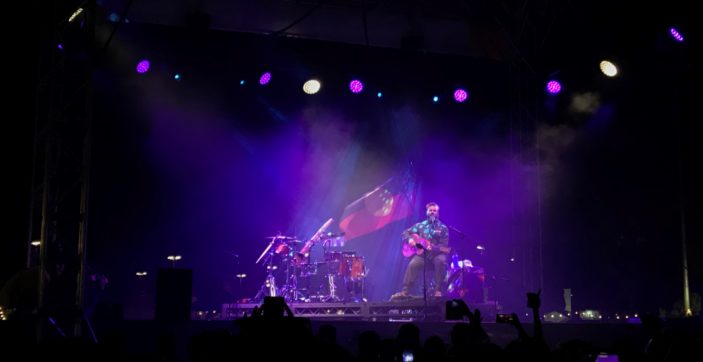 The multi-talented Rudd took to the stage alone with the sun now set, but much to his and the crowd’s frustration he endured two false starts with more sound issues. Eventually, after a 20-minute delay the jumpsuit-clad Torquay-born singer-songwriter, shadowed by an Australian Aboriginal flag, returned to dazzle.

Rudd’s multi-instrumental talents shine live, seamlessly moving from guitar to didgeridoo to harmonica to banjo song-by-song and doing it all on his own, albeit with the non-stop aid of his trusty stage assistant.

The kick pedal in “Storm Boy” got the audience up, while the popular “Follow The Sun” generated a sing-a-long, before ending with a dulcet rendition of “Spirit Bird”.

While Rudd is quietly spoken, the lone Butler stepped out minus two-thirds of his trio for the day’s final set with plenty to say. He bewailed Rio Tinto for blasting Juukan Gorge before launching into “Treat Yo Mama” and delighted the audience with “Better Than”.

Butler also drafted his larger-than-life wife Danielle Caruana (known artistically as Mama Kin) on to the stage, performing an emotion-charged version of “Losing You” together.

He also revealed his father who he’d cared for in palliative care had passed away one month ago to the day, followed by his wife’s father the next day, before devoting a wonderful version of the instrumental “Ocean” to their dads.

The intensity and intricacy of Butler’s set were easy to feel, despite any fears that the Turntable might impact his engagement with the audience. Butler closed with “Zebra” after his mellower interlude to send the crowd home happy and the organisers content that their world-first COVID-safe set-up works. 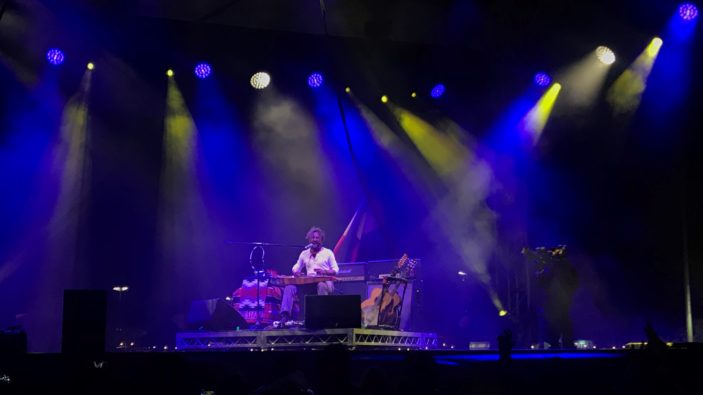