Download Festival debuted on Australian shores in 2018 with a single Melbourne date and following that success, the festival decided to expand and add a Sydney date this year. Taking place in Parramatta Park, it’s a wonder how the festival immediately found its legs in a new city and venue to put on a well-organised and seamless event that showcased its impressive lineup.

Anyone who has been to a multi-stage festival knows the walking distance between stages can be ultra-tiring throughout the day and crucial to seeing your favorite acts when so many timetable clashes occur. But the five stages within Parramatta Park at Download Festival Sydney were refreshingly close to one-another; separated only by a rise in elevation out of a natural amphitheatre and through a line of trees. This rise in elevation also meant sound bleeding from other areas of the grounds didn’t occur. Walking between the two main couples of staging took less that 3/4 minutes with multiple entry/exit points so foot traffic ran smoothly. Like clockwork, acts took to the stage at their billed times.

The festival teamed up with Kenny Graham and Jake Smyth, the duo behind Mary’s burgers in Sydney, for a second time this year to bring an eclectic range of food options to the day. Their ‘Hell’s Kitchen’ saw chefs from Agrarian Kitchen, Momofuku Seiobo, Fratelli Paradiso and 10 William St. featured alongside Messina, Nighthawk Diner, Hardstyle BBQ, Greek St, Caliko, Superior Burger, Happy As Larry and Bovine and Swine, to name a few. Festival-goers were also spoilt for choice amongst market stalls from 24 Hundred, Sea Sheppard and craft and vinyl sellers. 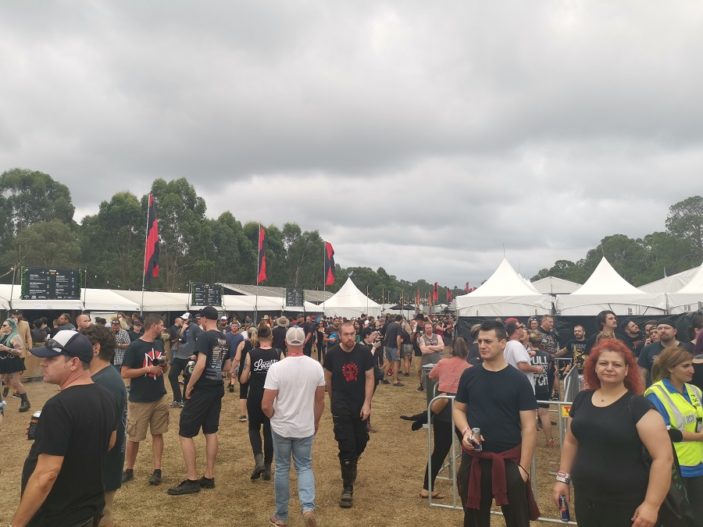 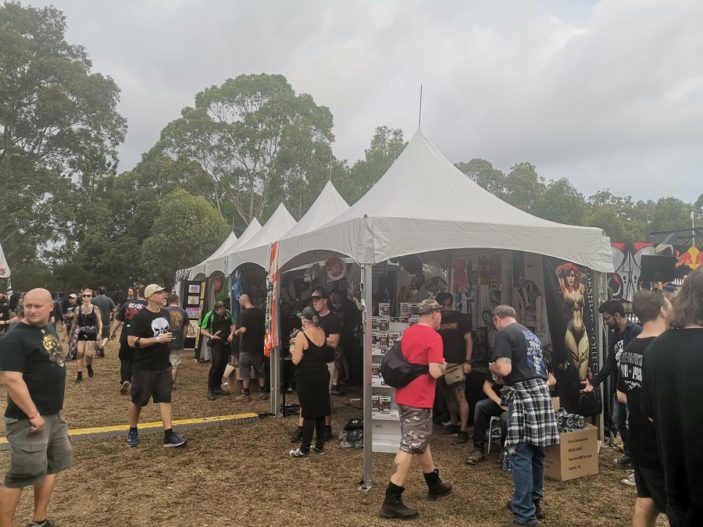 Sydney’s RedHook began the day with their rock/rap/electro hybrid as punters slowly filed their way into the venue. Their track “Paralysed” and “Turn Up The Stereotype” quickly hooked the ears of early birds and they gathered a joyous crowd.  The homegrown talent confidently showed that hard rock and metal has a bright and healthy domestic future with Voyager, Eat Your Heart Out and Ruins thrashing with soaring and heavy hooks. High Tension were a highlight of the day with lead singer Karina Utomo roaring with chaos in a set that celebrated their latest LP Purge. It is no surprise why they were asked back after playing Download in 2018.

Jason Aalon Butler and Stephen Harrison of Fever 333 proved how chemistry is key in a band. With constant expressions of fun, confidence and brazen enthusiasm, the two stomped the stage shirtless sharing microphones and swapping smiles. Pittsburgh’s Code Orange threw and smashed monitors as they demanded your attention from aggressive riffs and drummer Jami Morgan’s vocals which were never impacted by his ferocious playing. The bands sound was heightened when vocals were shared with guitarist Reba Meyers who complemented Morgan’s.

Frenzal Rhomb opened their set with “Crazy Train” by Ozzy Osborne to the delight of the large crowd. After a quick greeting from Jay to the Sydney crowd, Lindsay corrected, “This isn’t Sydney, this is Parramatta. Sydney is over there somewhere.” Considering Jay got off a plane from Belgium only a few hours prior, the band were tight and fun. Set-closer “Never Had So Much Fun” spurned the largest mosh pit at the festival yet. With blood running down their faces into ghoulish makeup and fire pyrotechnics throughout their set, the theatrics helped make Polish death metal band Behemoth one of the most memorable performances of the day. 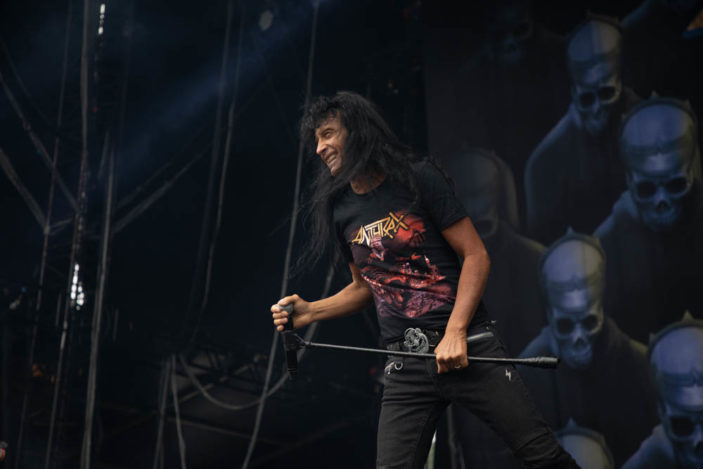 Joey Belladonna’s vocals soared as he ran the lengths of the stage through Anthrax hits “Caught in a Mosh”, “Be All, End All”, “Evil Twins” and “Indians” with a constant smile on his face. The crowd sang each track word for word in accompaniment.  As well as their own songs “House on Fire”, “Satellite” and “Savior”, Rise Against played two covers – Black Flag’s “Rise Above” with Shawna of War on Women and Misfit’s “Mother” with Spike Slawson of Me First and the Gimme Gimmes who Tim McIlrath called “the best crooner on the tour.” They even threw in a brief snipped of “Paranoid” by Black Sabbath. Alice In Chains suffered from a badly balance mix and quiet sound with requests from the crowd to increase the volume. Lead singer William Duvall sounded muffled and swallowed by the rest of the group at times but nevertheless, the band gave a legendary set that featured “Them Bones”, “Down in a Hole”, “Man in the Box”, “Would?” and “Rooster”.

“We feed off you and we will keep giving you this shit until the wheels fall off” Pennywise lead singer Jim Lindberg told the crowd following a cover of The Beastie Boys “Fight For Your Right”. “Pennywise”, “Fuck Authority” and “Alien” were all featured, as was a cover of Ben E. King’s “Stand By Me” that built to accompany a wild mosh pit. 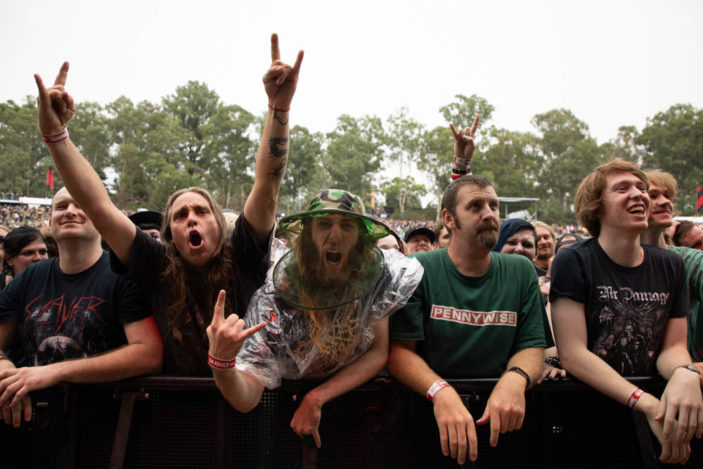 What makes Slayer’s farewell harder to cope with is the fact they’re still so bloody good live. Tom Araya’s vocals are still as guttural and punching as ever. Paired with the whippingly plucked riffs of Kerry King who thrashed his head and shoulders to every beat. Washed in waves of red and blue lighting, the band careered through a 90-minute set that opened with “Repentless” before moving into “Blood Red”, “War Ensemble”, “Seasons in the Abyss”, “Raining Blood”, “Chemical Warfare” and finally “Angel of Death”.

Sum 41’s Deryck Whibley chose three lucky fans from the crowd to join the band on stage for the entire gig to start their performance. Whibley endless hyperactivity, for which he apologised numerous, was actually charming in a way. He made their hour-long set constantly joyous and fun, especially when they played their largest hits back to back for some of the loudest sing-a-longs of the day  – “In Too Deep”, “Fat Lip” and set-closer “Still Waiting”. Queen’s “We Will Rock You” and a snippet of Pink Floyd’s “Another Brick in the Wall Part 2” were thrown in for good measure.

Whilst Sum 41 played next door, Download’s Avalanche stage was being transformed into a cathedral. With a flight of white stairs, a stained glass window backdrop and numerous platforms all in place, it was time for Ghost. The famous (and intimidating) “Nameless Ghouls” were dressed in shiny, metallic gargoyle-eqsue masks and moved in choreographed routines all night. The range and gravity in Tobias Forge’s voice appeared effortless as he swaggered and weaved the numerous ghouls and commanded the stage and everyone’s attention.

Even though Ozzy Osborne was sorely missed on the lineup, impressive homegrown talent that showcased a healthy Australian hard rock future, a festival location that allowed for smooth transitions between stages and the continued proof that festival organisers can attract the largest names in hard rock and heavy metal to our shores; the Sydney debut of Download was a raging success. We eagerly await Download 2020.

Download Festival will be hitting Melbourne on Monday March 11th. For tickets and information you can head HERE.

All photos by Lachlan Mitchell. You can check out Lachlan’s complete Download 2019 gallery HERE.