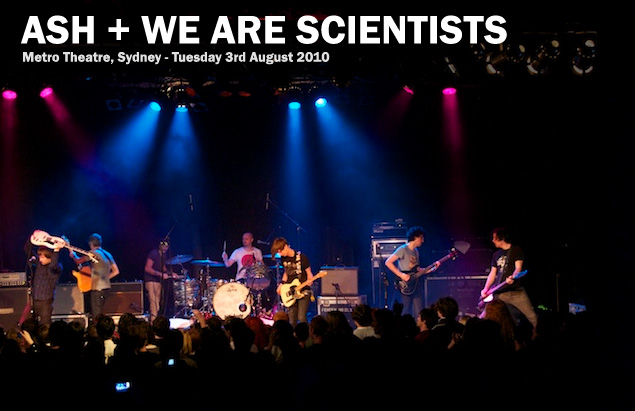 Just two days ago, the Metro Theatre was faced with a dark divide: on one side were the loitering, cigarette smoking hipsters; and the other, groups of chubby middle-aged men joking loudly and drinking VB. It’s moments like these which bring a tear to my eye, proud of music’s role in bringing all sorts of human scum together. It was, however, a night devoid of bitterness and elitism, everyone was here to enjoy a good show with 90s britpoppers Ash and indie-rockers We Are Scientists.

In support of the co-headliners was the kooky young band, Last Dinosaurs. Taking the stage with timid eagerness, the four Brisbanites launched an incredible set which showcased their vibrant musical talent. With a sound reminiscent of The Libertines, or more recently, Babyshambles; Last Dinosaurs played with ease and experience a set of complete, brilliant rhythms.

With such creative young minds given an opportunity to let all their random, witty thoughts loose, you would expect to end up with a selection of interesting subject matter in the music: from the loneliness of Nicola Tesla, to bad tits, to how to surf. Last Dinosaurs were only given recognition in 2009, but already they’re displaying the qualities and attitude of an experienced, developed band. With a smiley faced drummer, good-looking band members, and catchy indie-rock music, there’s not much about them that wasn’t great.

First of the head-liners to play was Ash, I assume to cater the needs of those middle-aged full time workers. Despite the fact that I was two years old when this band was formed, I am a massive fan of britpop music, and was able to fully appreciate their prescence on the stage that night. Opening with “Oh Yeah”, the band played with the exact energy they possessed ten years ago, to a room of fanatics just as crazy as they were ten years ago. Showing off a set of songs from their latest A-Z Series, as well as a number of hits (“Shining Light” being an obvious crowd pleaser), with the sticky sweetness of Wheeler’s voice, Ash were able to impress even those previously ignorant of the band. “Twilight of the Innocents” was a powerful and emotionally charged performance, and followed by “Burn Baby Burn”, an impeccable end to a beautiful show.

Finally, stumbling on to the stage muttering unintelligeble anecdotes with their faggy American accents, was We Are Scientists. After declaring the absolute “dream come true, honour, priviledge” it was to play with Ash, WAS sent the audience into a jumping, clapping frenzy with “The Scene is Dead”. More entertaining than their music, I found, was their constant interaction both with the crowd and each other, developing a kind of intimate friendliness which made the show more pleasurable. It was a clever tactic, as their music is rather unoriginal and uninteresting, driving a lot of those who came to see Ash to leave.

Determined not to abandon fan favourites from their not so successful albums, WAS showcased tracks from their latest, Barbara, as well as a number of songs from the “little second record that could”. It’s a bit ridiculous to outright label WAS as creating “bad” music, their fanbase clearly differs, but with a severe lack of catchy, thoughtful music, it’s not hard to believe that the audience were more excited for Ash.