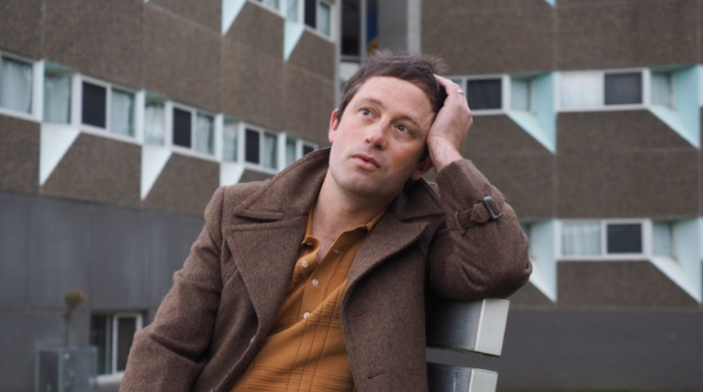 Belles Will Ring‘s Liam Judson, otherwise known as Lewis Goldmark, has unleashed a glorious mix of vintage haze, experimental pop, and indie-disco on the world, in the form of debut solo album Cut and Flash.

Judson did it all, writing, producing and engineering the entire project from his Blue Mountains studio. Well, almost – we’ve got Ivan Lisyak to thank for the drums and Lauren Crew for the backing vocals. The end result is pure escapism, a blend of eras and genres that hits a little different.

“Thematically, a good portion of the album pays tribute to the wee small hours of the morning – post-midnight haziness and beauty,” Judson explains. “Cities, friends, lovers, nightlife, morning afters, indulgences, danger… Though not a “concept” album by any stretch, the record was arranged to flow through and take the listener on a kind of sonic trip.”

To celebrate the album’s release, Judson took us through Cut and Flash, track by track!

From the very beginning of the project, I wanted to open the album with a kind of musical tribute to the promise of a Friday night – to paint a picture of that kind of atmosphere of catching the train home from work at sunset or walking home as the cool of the night approaches. To me, the first side of the album is really supposed to have the feeling of the weekend, so this is my way of setting the scene.

“On the Second Floor”

By pure chance, my partner and I have lived on the second floor of several apartments in and around Sydney. When I wrote the song, I was still living on the second floor of a block in Ashfield and the song is really just a love letter to that place and the memory of the other rooms. It details a standard Saturday night of getting loaded and dancing to records with your favourite one until you pass out on the couch as the sun rises.

And here we are travelling through inner suburbs alone on a train during the Official Summer of the Psychos, several years ago. I can’t explain it, but every time I got on a train there were strange folk doing really destructive things, and being incredibly aggressive. I don’t scare easily. I was scared often. I wrote this at the time and it’s the oldest song on the album.

Although I can’t really detect a direct musical influence, I feel this is me in full New York mode. I’ve had a fascination with that city my entire life, and musically a lot of my favourite things are New York; from the Brill Building songwriters, the Velvets, the lower east-side punk of Suicide and Television to Sonic Youth, and yes even Broadway show tunes. The music in the bridge was inspired by the Bob Fosse film, All That Jazz.

The spirit of this song was captured perfectly by an old friend whom after hearing it wrote to me, “Ah, the encroaching big black dog saved by the girl”.

Musically, the use of Rickenbacker and high-strung Danelectro guitars are used to balance out some of the bleakness in the verses, and compliment the affectionate euphoria of the choruses.

I enjoy dancing around the house to this doing air-guitar, and even more so, air-drums. I love the matter-of-fact-ness to Ivan’s drums here. He said, “I’m not going to play any tom drums on this song.”, and I said, “No problem.”

The beginnings of “Wild Night” came about one summer Friday late afternoon, when just mincing about my then apartment in Ashfield, I picked up my baritone electric guitar and started doodling. Straight away my fingers went to the melodic figure that would be the eventual bedrock of “Wild Night”. Typically, I don’t know straight away if I like or dislike tunes or riffs I come up with, so I kind of kept it in the back of my mind as a “maybe one day” thing.

Fast forward a year or so, a good friend introduced me to a fairly obscure 1988 solo album by Peter Koppes, guitarist from The Church called Manchild & Myth. The sound and songs immediately captivated me, and the icy, late night wooziness of that record inspired me to turn this baritone riff into something.

The words deal with the shaky beginnings of a brand new romantic connection between two people who may already have been acquaintances. But whether the romance will be something that endures, or just a night’s fun will be determined in the aftermath of this first “wild night” constructed by the protagonist.

Lyrically, it captures a lot of the feelings and themes of the album, and being one of the later additions, this was most likely due to me living and breathing the album’s atmosphere.

If “Wild Night” is the sound of 8pm Friday night, then this the sound of 1:30am Saturday morning. It’s the hazy signing off to the first side, or as I see it, Part 1 of the album. Inspired by the sound of taking a 45rpm record and playing at 33 1/3, this is essentially “Black Lake” slowed down and turned into the anthem for those who can reach the dawn.

Side 2 of the album takes the listener on a bit of a different journey – haunted by the past and with a general uneasiness about the future, the songs stretch out and luxuriate a little more than snappy fast-paced action of Side 1.

It starts with “Midnight 2” which covers a night of feverish insomnia and night thoughts – the ups, the downs, memories, regrets and finally hope when reaching dawn and realising, “I’m still here”.

It’s a kind of sequel to my old Belles Will Ring tune, “Midnight”, thus the title. That song is an old favourite of mine. Thematically the songs are quite different, though here there are references to that period of my life and so I feel the connection nevertheless.

Sonically, it’s another one of the album’s many tributes to the wee small hours. There are lots of synths here, depicting with its soft hues the black and blue of the night sky and pickled with fuzzy guitars indicating the lights of a sprawling city.

“In Your Room”, or otherwise could be titled Lewis’s Only Coming-Of-Age Song. Continuing with the “haunted” theme, lyrically it recalls memories of loss of innocence in brick and fibro suburban houses. Life altering events that can occur on molten-hot summer afternoons.

Aptly, the main chord progression dates back to my late-teenage years, from an old abandoned song. Mysteriously the chords came back to me early in the creative process of the album, with the new melody and lyrics almost instantaneously. Soon after, the arrangement concept was cemented after I caught a Roy Ayers song on the radio that provided some sonic inspiration.

Walking with purpose through rain washed streets in an unfamiliar part of town toward a gathering of people I hardly know in a fancy high rise with dubious outcomes. Fun stuff.

A musical salute to very strange nights, this song is one of the denser of the record with lots of sounds like string machine, stylophone, burbling analog synths, a one of my better guitar solos.

This song is a call out to my old crew, and really my generation of musicians. Where are you all? The party can still go on, it doesn’t have to end. It also looks at old muses and what happens when they grow to become disappointments… all those intense feelings that shape you and your art. Now you look at them and feel nothing – what do those old songs still mean? The song says, “We’re fading out” but it’s meant more as a warning.

The melody is probably my favourite on the album and Ivan’s drumming is stunning as usual. It’s kind of a bittersweet pop tune and I’ve always wanted to end an album in that way. Quiet resignnation. My answer to “Oh! Sweet Nuthin’” on Velvet Underground’s “Loaded” or “Saturday Night” on Suede’s “Coming Up” – both long time inspirational records for me.

Lewis Goldmark’s Cut and Flash is out now – find it on your favourite streaming service HERE.
Stay up to date on all things Lewis Goldmark via Facebook and Instagram.