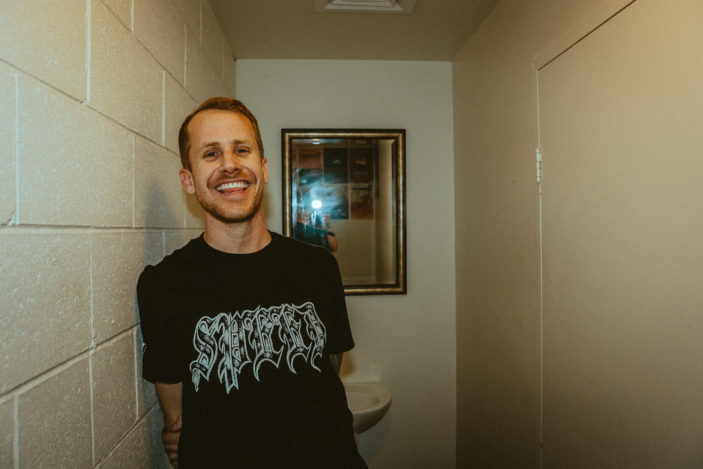 We had a chat with Richo about the album, tour support and more.

“I was trying to make vegan pepperoni and I dropped the fucking bowl on the ground and it exploded and I’ve just been trying to clean it up for the last ten minutes,” he says of running late, apologising profusely.

Jokes aside, it turns out that the 10-track acoustic project has been in the works for quite some time. With his debut single “Text Her” dropping in May this year, Heaven in the Suburbs is a product of the forced break from touring with his band during the pandemic.

“It’s been a massive relief, I’ve been working on this thing for so long on and off. I guess I’ve been trying to write these songs for literally years but every time I write something I like, I give it to Brasi.”

The album is comprised chiefly of acoustic guitar and piano with strings and pads used sparingly to bolster Richardson’s signature emphatic vocals. As the vocalist and bassist of a rock band, we asked him if the songs were always going to be stripped as they are on the record.

“I really wanted to make an acoustic record that I could play live but I didn’t want to make too much of a punk-to-acoustic record, if you know what I mean. I tried to work in a lot of layering of textures and some keys, just different sounds and shit.

“We tried to do it quickly, easily and cheaply,” he laughs. “The only things that are acoustic are the guitars and pianos.”

Richardson teamed up with long-time friend and Slowly Slowly frontman Ben Stewart to record and produce the album at his house in Melbourne. Since releasing a split EP together in 2020, a mutual trust made the creative process that much more enjoyable.

“Ben worked really well with me because he has so many ideas. He’s a total genius, man. I’d love for people to hear some of the original stuff I sent him then hear what the record came out like, it’s completely different. The split kind of became the catalyst for this whole thing. I asked if he would want to hear some more of my own stuff, which became Text Her – my first song I put out.”

As the title suggests, Heaven in the Suburbs tells the story of a man navigating his way through the mundane and profound in middle-class modern life. A standout is deep cut “Things That Break Your Confidence”, with haunting picked guitar and swelling strings soundtracking a panic attack.

“Things That Break Your Confidence was such a different outlier of a song. We were both like, ‘let’s make this sound weird and different and spooky’. It’s in the middle of the album too, so it’s like a real break. Suburban Block is the one I like the most though, I think.”

Another touching moment on the record is “Yellow Dog”, describing the fear of knowing that one day everyone we love will die – including our beloved pets. It serves as a hopeful reminder to enjoy their company while you can and not let the future get you down.

“I wrote it and showed my wife and she was like, ‘you can never play that song to me ever again, please don’t do that to me’. It’s a bit of catharsis. Marley is absolutely fine but those thoughts about those things are what spurred that song on and it made me feel a bit better, so I suppose it was worth something.”

The lyrics of the album are immensely personal yet relatable, a testament to Richardson’s songwriting and thematic intention. From anxiety and vices to love and hope, his debut solo effort is as poignant as it is comforting.

“I wanted to write something that kind of represented where I am, like a real every-man sort of record. Someone commented like, ‘you captured something about my early teenage years in suburbia’, and I was like, ‘fuck, that’s kind of how I feel now’. I’m really glad that’s how it kind of came across. A lot of these lyrics came together for me really quickly and easily, more so than with Brasi. My whole thing was like, if it comes naturally, that’s the song – don’t go too crazy picking it apart.”

Tyler Richardson will be hitting the road with Perth rockers Sly Withers this November in support of their album tour, including shows at Canberra, Sydney, Brisbane, Melbourne and of course Hobart. He’s nervous about stepping into the spotlight with nothing but an acoustic guitar to accompany him, yet the emotive power in the songs will surely move crowds.

“I’m looking forward to it. I played a show in Melbourne a couple weeks ago that was my only solo show interstate. I’ve only played about five in total ever, anyway. It’s a new departure for me, man. It’s something I’ve always wanted to do but I had to kind of get my chops up to actually do it. It’s very easy to hide behind the boys in the band.”

We asked him what fans can expect to see at the shows and, well, you’ve gotta give it to him for being honest.

“A lot of me trying to be funny to cover up the fact that I’m fucking terrified that I don’t know how to play guitar very well. I pretend to say, ‘hey, what Luca Brasi songs do you wanna hear?’ and just play the couple that I actually know. I’ve got to keep people happy somehow.”

So, it begs the question: if all goes well, is there any chance of a headline tour in the new year? As humble as ever, the guy is so wholesome it hurts.

“I’m gonna play these shows and then assess my options. The whole month of January, I don’t really have any shows but I need to support the record, so I guess so! My whole music career has been like, ‘oh well, I guess I’ll keep writing songs and getting on an aeroplane and going somewhere’ without ever meaning to. So the fact that people care and listen is more than I could have ever hoped for.”