Interview: Sarah Blasko on touring As Day Follows Night, the next album and her love of producing 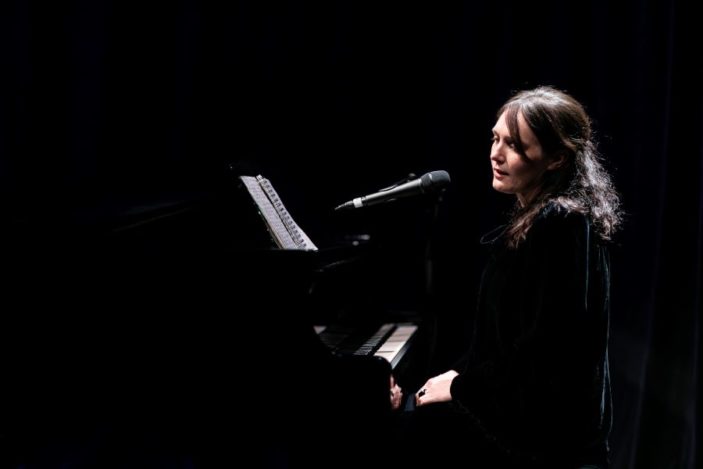 Sarah Blasko has been revisiting her seminal album, As Day Follows Night, with a series of shows on the East Coast of Australia. A somewhat delayed ’10 year anniversary’ of the album has Sarah playing gigs in Melbourne, Sydney and Brisbane. The Sydney show is slated for the 24th March, and Brisbane on the 9th April. Further details are below.

The album was incredibly well-received on its release, and has stood the test of time. It won the 2009 J-Award for Australian Album Of The Year, achieved Platinum certification, and Sarah was the ARIA award winner for Female Artist of the Year.

Tracks from the album including “All I Want”, “We Won’t Run” and “Bird On A Wire” have proved to be fan-favourites and are regular entries on the Sarah Blasko setlist. The album is being performed in its entirety, in classic venues including Sydney’s State Theatre, Brisbane’s Tivoli and Melbourne’s Recital Hall.

I caught up with Sarah after her Melbourne show, to chat about the tour, reprising the album, and to find out the progress on her next album.

Hi Sarah, congratulations on finally getting the tour going

Yeah, we were lucky in that we didn’t get to the announcing stage with these As Day Follows Night shows. We had it in our mind to do them, but hadn’t got as far as announcing them and having to reschedule.

I realised I didn’t really take it seriously that I was going to do the show until a week or two before the first one happened. It was really wonderful to get back on stage.

So the two shows in Melbourne went well for you?

Yeah, they went really well. It was emotional for all of us. None of us had really done a show in about a year. It was strange to get reconnected to something we do all the time.

What was it like to revisit the album after it had been so well received, and to play the album in full after that period of time?

Because it’s one of my better-known albums, there are a few songs we always play – “All I Want”, and “We Won’t Run” – but some of the other stuff I probably hadn’t played for nearly 10 years.

The main thing I’ve been really glad for, I made a conscious choice to make it an uplifting album at the time, it could have been really sad and distressing. It is a sad record, but I was really intent on making it as an album that didn’t sound sad. It was as much for myself as anyone else, cause I wanted to be pulled out of the place I was in, I really appreciated that choice coming back to it. I feel proud of that I guess.

It’s interesting – you always apply something of your own life now to older material, and I guess I’ve appreciated that as well. I still feel that within the songs there’s something I can get hold of, or ring true. I think that’s really important to recreate older music on stage live again and to be able to feel something. Quite a few of the songs I decided to breathe some new life in them. Not melodically, but arrangements. I think they are important choices to make, cause you want to feel like you can still relate to them. That has been an important part of bringing the shows together

Sure – it helps to keep the process authentic for yourself. Next stop Sydney at The State Theatre. Last time you played in Sydney it was the Old 505 theatre as part of Great Southern Nights. They were very different shows

They were extremely intimate. There was a max of about 60 people each night. Which I really enjoyed. It was a bit of a bootcamp. I hadn’t played any shows that year because of the pandemic, and having a kid, so doing 2 shows a night for a week was interesting

These shows are such a load off for me, cause I’m not playing anything, I’m just singing. It’s quite freeing for me. The last time I did a show was April for WOMADelaide

Do you have a preference for the small v’s bigger venues?

I think they are good for different reasons. It became a running joke between Holly (Throsby), Sally (Seltmann) and myself on the last Seeker Lover Keeper album, that because there are three of us, there’s always room for someone to like it, someone to not like it, and someone to say I like both. That’s my answer to festivals versus intimate shows. I like both! I sincerely do because it draws out different sides to yourself. There’s something great to prancing around on huge stages in front of a massive group of people. And there is something really great about being able to almost whisper, and there are people right there.

In a way, it’s almost way more terrifying to play to a small crowd, as it puts you under more of a microscope, but yeah, they just teach you different things. So it’s good to do both as much as possible

You’re working on a new album I believe. How’s progress?

Yes, very very slowly. I’ve had stages over the last year and a half where I felt here I go, I’m really getting into it. Then things change and I have to put it aside. For me personally, I feel like it hasn’t been a great time to throw myself into that sort of project. I’ve felt very distracted. I haven’t found it a very creative time at all.

I’m feeling like I’ll just start again. I can feel now things are starting to calm down. Getting on stage is an encouraging thing for me. It’s put a bit of a fire back. Which is important to create. I realise there is a side that has been lying dormant for a while.

The whole creative community has had a difficult time…

Yes, some people have really gone for it. I have some friends who have been really creative. It depends on what style of things you do. I’ve found lyric writing extremely difficult right now.

We are suffering in Sydney venue-wise. Venue 505 shut down. That’s three venues in the last week.

Yes – it is – everyone knew it was coming I guess. It doesn’t make it easier. It’s hard to say at this point

It has certainly been tough on emerging artists

I feel for those in their 20s or teenagers. For me that was such a formative time, getting up on stage, and trying those things out. There’s nothing like throwing yourself at an audience and seeing what works. It’s taking more away from those artists

You’ve dabbled in some production – you produced Jack Colwell’s beautiful album Swandream – is that something you want to do more of?

Yes – it’s definitely something I’d love to do more of. I haven’t really put myself out there – and I haven’t hunted it down. But I loved doing that. I really enjoyed that. When you have the belief in what someone can do. And give them some guidance on the things you’ve learnt yourself. It was very satisfying. And we had a great time doing it, cause we’ve both got a ridiculous sense of humour.

I see you’ve got Alyx Dennison supporting you in Sydney

Yeah – she’s a good friend of mine – she’s amazing. Her new songs are incredible.

Yes, I loved her song “Keep a Day” free. It was pretty special. Is there any music you’ve been listening to recently?

More like what music my son has been listening to. He has just got into Led Zeppelin big time. I’ve never really got into them before, so that’s been fun. And AC/DC. That’s been it!

And my other son loves the Supremes and Aretha Franklin.

Thanks for the chat Sarah, and good luck with the rest of the tour