We recently caught up with Sam Bentley from The Paper Kites to chat about their recently announced 2019 Australian tour and their appearance as part of the Twilight at Taronga series. Also on the agenda was their new releases from this year: On The Train Ride Home and On The Corner Where You Live.

2018 has been an incredible year for your band. With your much-loved track “Bloom” thriving worldwide long after its release, going gold in the US, it seems the idea of a single or an album cycle is a thing of the past. How does this surge of success for something you wrote such a long time ago feel?

I think that song is just a great example of the way things seem to work for us – it’s just been this really gradual build. At this point it doesn’t really feel like it’s our song any more – people are very fond of it and it has its own memories and meanings for different people.

For me it’s just another song, I don’t mean that in a throw away kind of way – we’re fond of it too and that song has brought a lot of people to our music – but the way it keeps surging on has always surprised me. The song itself is just a song but I think what makes people so attached to it is the memories they’ve connected to it – I think that’s why people are so passionate about it at shows too.

Either way it was a real honour to hear that it had gone gold in a few countries and as much as we like to keep our heads down and keep working – it’s a really wonderful achievement for an Australian band in this day and age.

From twelvefour in 2015 to On The Train Ride Home and On The Corner Where You Live this year, how would you say your sound has evolved, particularly over the last few years?

‘On The Corner’ was a more natural follow up to ‘Twelvefour’ and I think it was the album people were wanting/expecting but we released ‘On The Train’ first because we had all these almost acoustic tracks that couldn’t seem to find a place on the full band record so it just made sense to us to release them as a separate record.

Our fans are great and they’re just music lovers – so I think the people that know our music wouldn’t be surprised at all over an acoustic record or a full band record – we’ve tried to set it up in a way that allows the band to do whatever we feel like doing musically. I think as long as the songs remain honest there’s a lot of room to frame those songs stylistically – and our fans so far have been really supportive of the ways we’ve gone about doing that.

Any sort of sound evolution has just been pretty natural and it’s really just a result of getting older and maybe the songs hopefully having a little more depth and perspective, and the sounds being a little richer because we know more about crafting music than we did on the last record. You’re always growing and learning and if you’re main aim is sincerity then I think your songs just naturally grow along with you.

You’ve spent a lot of time touring and recording tracks overseas, how does it feel to be bringing the music home with the announcement of your upcoming Australian tour?

We can’t wait – any time we get to tour back home is always great. It used to be back in the day in Melbourne we’d play maybe a few shows a year and all our friends and families would come out but these days we’re really only playing one show in Melbourne every year or two so it’s always a big deal for us to play there and to be able to tour Australia. It’s our home and it’s where everything started for us – and we’ve always had such great shows here too. Australia has such an incredible music scene – particularly at the moment it’s really rich and exciting – It’s a great thing to be a part of.

You’re playing at the annual Twilight at Taronga series on March 2nd next year in Sydney. Are there any musicians on the line-up you’d love to meet or watch over the course of the concert series?

It’s a great line up this year – I love The Waifs – unfortunately the only twilight show we’ll actually be in town for is our own but in an ideal world I would love to catch Vera Blue too. I haven’t had the chance to see her yet but she’s doing some really great work. I think when we’re there though if I can get a free pass to see the animals at the zoo that day I’ll be pretty happy. Maybe hug a monkey. I don’t think they’ll let me.

What can fans expect from the show at the venue?

I never know how to answer that question, I could give you the set list and they’d know exactly what to expect but that wouldn’t leave much mystery. I’ve never played at Taronga before, I’ve heard the view is beautiful so I guess you can expect that we will be there, a nice view and probably some exciting animal noises.

Obvious but important question: if one animal from said Zoo could be in your audience, what would it be and why?

I feel like people would be upset if there was a giraffe because it’s really the ultimate tall guy standing in front of you – maybe something smaller and cuddly like a koala that people could just pass around.

The end of your Australian tour will be spent at the iconic Forum Theatre in Melbourne. Are there any favourite venues across the country that you adore and can you tell us a little bit about your favourite Australian crowds?

Well our favourite Australian venue probably is actually the Forum Theatre – there’s not really many other venues like it in the country and it sounds amazing too – I’ve seen so many great shows there and i’d always wanted to play there when I was younger. So any time we get to play there now it’s still a really special show.

I don’t think any crowds stick out more than other crowds in Australia – but we’ve always had really enthusiastic crowds in Sydney. We obviously love playing in Melbourne as it’s our home town but generally you also have all your friends and family coming out of the woodwork to see the show – so even if you’ve just come home from an overseas tour and feel really polished as a band you can’t help but feel a bit nervous when they all come out.

There’s an emotional touch to your tracks, what have been some of the biggest influences for these LPs?

I’d probably just say that there are lots of areas that I take inspiration from like any person trying to create something – but the one consistent thing for both of the records was that I knew the feeling that I wanted them to have and I knew how I wanted people to feel when they listened to them. It’s hard to say exactly what that is – but I wanted it to be more of a solo listening experience – and there are moments in the records and things to take out of it that probably lend itself best to just putting on some headphones and listening from start to finish. I like to think there’s a song for everyone in there somewhere. I try and write sincerely – I don’t want to make the songs too cryptic or inaccessible that people can’t understand what they’re about. I think the people that are big fans of the band are very passionate and protective of the songs they love and the way they feel about them – to me that’s a great thing to be able to do.

With a legion of fans far and wide, where do you hope to take your music next and are there any big goals you still have left for the future?

I think we’ll just keep putting out music and touring it – there’s still plenty of places we haven’t had the chance to play yet that we might get to finally go to – but the streaming world means that music has unlimited reach these days to all the corners of the world. I think the goal as it would be for any band is to just keep making the best music we can and putting it out there, and hope people continue coming to shows to hear it. I think if we can do this for a while – that would be a great achievement.

For more on The Paper Kites head to the Facebook Page. The group return to Sydney to play Twilight at Taronga on March 2nd, as part of their 2019 Where You Live Tour. For tickets and more details about the full Twilight program, which kicks off February 1st, head HERE. 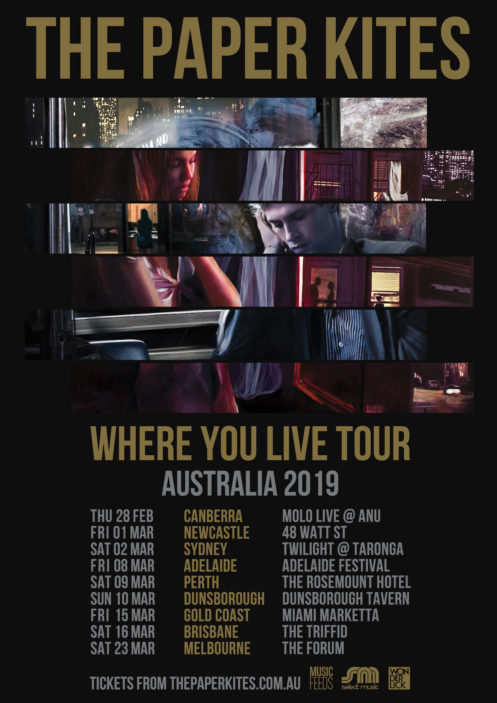