Sydney’s Johnny Hunter are a post-glam punk rock outfit that has been captivating audiences since 2018. With Nick Hutt providing lead vocals and theatre upfront, Xander Burgess on lead guitar, Nick Cerone on bass and Gerry Thompson on drums, the band has an incredibly captivating live show. Taking their influences from bands such as Joy Division, New Order and Nick Cave, transformed into their own sound, the band released their debut EP, the outstanding Early Trauma in August 2020.

The opportunity to tour that EP was severely curtailed due to the pandemic, but they did manage to squeeze in a handful of memorable shows. The band has released two quality singles in the latter part of 2021, “The Floor” and “Life” and are clearly at the beginning of a new creative surge. I caught up with Nick last week to chat about their beginnings, their influences, and hopes for the future. I was also keen to find out just who the hell is Johnny Hunter.

Hey Nick, good to see you. I reckon you guys earned the prize for the most lively gig at the Lansdowne during Lockdown. People were having major problems staying seated.

Thank you. That was the first gig we played out of the first lockdown. Our shows are always high energy, we feel like we need to leave everything out there on the stage.

You definitely did that. It was great fun. For some of those gigs, I was wondering how it was going to work, but it certainly did with you guys

It just had to, when I was younger, and developing the Johnny Hunter persona, I did a whole lot of research, on live acts back in the day and how they interacted with crowds. Most of the time they were seated. You look at Bowies first gig as Ziggy Stardust, and they were all seated, and the same with The Beatles as well. That’s how it first started. We were getting back to the roots of live entertainment and music. Putting on more of a cabaret than relying on everyone just moshing with you. 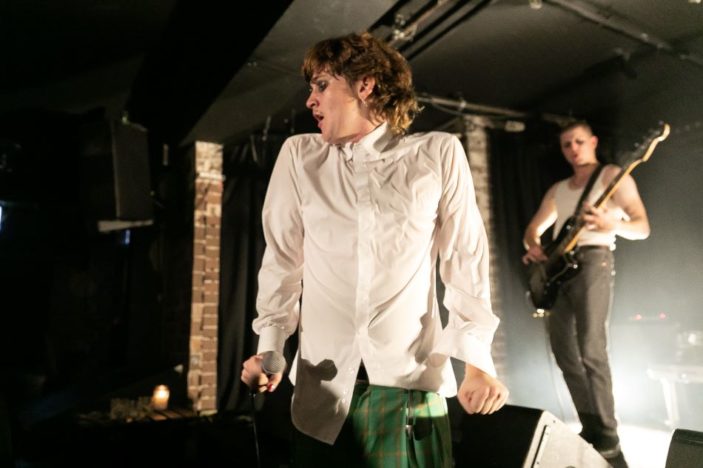 It must have been frustrating for you, having just released your debut EP, Early Trauma, and then have the opportunity to play it live severely curtailed.

For sure, we got those shows back in November, then the tour kept getting pushed back and eventually it wasn’t an EP tour, it was just an Autumn tour. It was so irrelevant to us in the life cycle of the release.

How did the band together?

I was at Uni in Wollongong. Xander (guitarist) was playing some guitar in one of the dorms, and I was pretty sprightly, off my head a little, and I’ve got some attention-seeking disorder, and I saw him. I’ve always wanted to start music, and my dutch courage led me to say some poetry to him when he was playing, and we started singing, and we chatted about starting something. We had a first project and we met everyone through uni.

I met (Nick) Cerone the bassist through going to one of our friends 21st. We were doing this thing with Boston accents. I was pretty good, and apparently, Nick Cerone was pretty good, and everyone was saying we should meet. When we met we were having this massive fight in Boston accent, everyone thought we were going to have a punchup, but it was just an act, and I said “Do you want to join my band?”, and he said “yeah!”. I ended up doing a student film with him, something to do with Boston, and that’s how we became close.

And Gerry, the drummer, was actually a fan of our old band. He was from the South coast, and would either come up and support us or watch us play, and eventually, we said we are looking for a drummer. He’s not even a drummer by trade, he is a guitarist, and he is so musically talented. Probably the most musically talented out of all of us, technically, and he plays drums for Johnny Hunter.

There’s no doubt that musically, you guys are a great band. Xander is a kick-arse guitarist. As captivating as you are at the front, the other three do create a great wall of sound

Thanks! We’re very happy with it.

Let’s talks about your influences – I see a variety – Joy Division, Bowie, Nick Cave to start with

For sure. Nick Cave is a huge influence on us – (Nick) Cerone and I love him. He loves him way more than I.  He is a serious Nick Cave perve. Joy Division is a big one. Sonic Youth – the earlier stuff with our guitars. These newer releases have taken a turn towards New Order rather than Joy Division as such. I’ve just got so stuck into them in the past three years.

A lot of the Cure as well. Kate Bush – she is fantastic. There’s a lot of influences from that era mixed in with the late 70’s 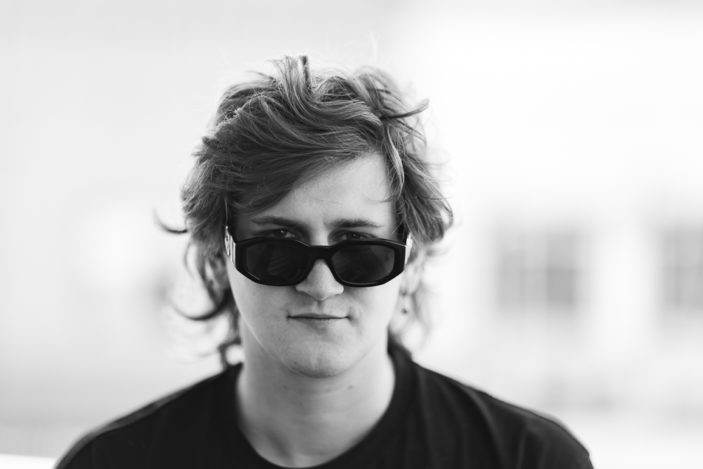 Your latest two tunes, “The Floor” and “Life”, are a bit of a pair in some respects. Despair followed by guarded optimism. Was this the intention?

They are fire and ice. I wrote “The Floor” when I was in dire straits, and I wrote “Life” when I was hopeful, so putting them together, on paper they don’t work, but putting them one after the other, they do, for sure.

There’s a bit of optimism in “Life” isn’t there, even though

How do you guys work in the studio, putting these songs together,  once you’ve come up with the bones?

One of us will come up with the bones. I’ve spent a fair bit of time writing with other people. Al Wright from Cloud Control contributed to “Life”, and Jack Moffitt from The Preatures, who recorded the songs contributed to “The Floor” as well.

With “Life”, we had this demo that Gerry had never drummed to before. We sat in a studio, which was probably the coolest part of that entire recording session. Jack looped all these drum machines and synthesisers together. He mic’d up this drum, and put this beat together, on a drum kit, sampling the bass and the snare, putting layers on it, very Joy Division, and we sat there and started twiddling with the different timings of the different drum hits, and we were in there for an hour. It was storming something crazy, and the cabin fever was going crazy. Eventually, we got this rhythm. We said ok Gez, sit on the drums and drum to that now, and he did. It was one of the more obscure processes during the recording of those songs, and hopefully we will be doing more of that in the future because it was great to get that sound. 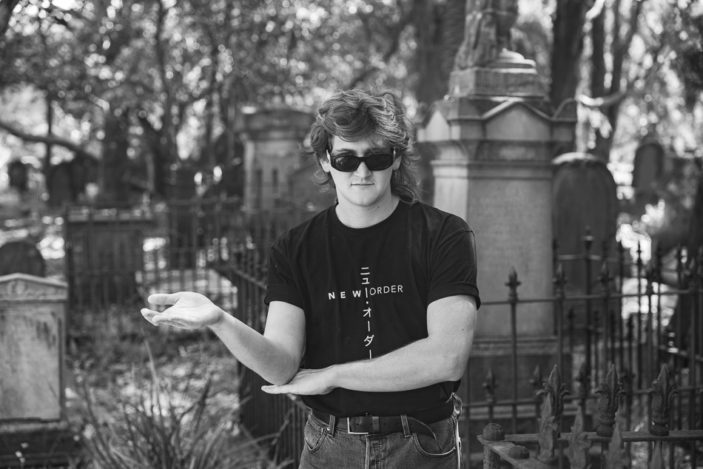 You must be busting to get out there touring again.

We are, but we aren’t counting our chickens yet. We will spend the next couple of months getting our personal lives in order, then when the New Year hits I think we’ll touring mostly every weekend.

I’m hoping we might be getting a record from you guys next year?

What’s your dream venue to play?

I like it. You guys would go down a storm in the UK.

We’d love to play there. Our label helped us with the video we have just put out for “Life”, it was filmed in London. Hopefully, when things open up we can play there. It’s been a goal of the band since we started. We have a dream of an endless tour in Europe. There are so many places to play there.

What are you listening to at the moment?

I was feeling a bit sorry for myself yesterday, so I put on the new Shady Nasty record, Clubsmoke. It’s very different to what we play, but it’s so original. And so originally Sydney, it’s quite pumpy.  It got me through the day.

Also, Air. I live In a house with two other musos. We have about 800 records, so we are constantly discovering new music from each other. Air is definitely one I’ve rediscovered.

Also Aphex Twin, – I’m really getting into the ambient sounds. I’m getting into these electronic sounds and loving them. Everything I listen to I search for inspiration for Johnny Hunter.

Speaking of which, how did you come up with the name of Johnny Hunter?

Honestly, I just thought it was a cool name

It’s a great name. I reckon a lot of bands don’t start ‘cause they can’t think of a name!

We were thinking of all these stupid names, which if the band was named after, no one would have listened to it. We were constantly were coming up with shit names, then I came up with Johnny Hunter. It was clear it wasn’t a solo thing. No one needs to know who Johnny Hunter is, it’s no one, but it’s all of us at the same time, and we can live through the character, so that’s how we did it.

Did the rest of the band get onboard with the makeup?

Exact, it’s Johnny Hunter. Get in the makeup now!  he was ‘ok I’ll do it then’. And now it’s second nature, everyone does it. Now I’ve got to get them into some crazier outfits maybe. It’ll come good.

I hope so. It’s been very tiring on the mind, during Lockdown, as it has been for everyone.

Yeah- it’s hard without a routine

I found solace in running. I was running a lot. Through that, I could write music. That really kept my brain going. Exercise is so good for mental health. If I’d just sat on the couch I’d probably be 100kg and really depressed, or a lot more depressed than I already am.

but imagine the songs…

(laughs) I’m pretty sure “Life” came from a running day.

Thanks for your time Nick.

Johnny Hunter will be performing at the King Street Carnival, 14th-16th January 2022. More information about the festival and tickets from the official website HERE