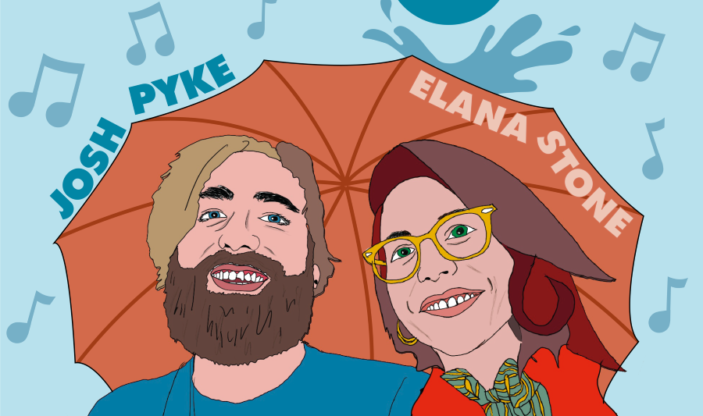 Fancy a career in the music industry? Are you a would-be record producer? Or maybe want to work for a publicist. Or can play a mean guitar and want to get some work as a session musician. Good news! Industry legends Elana Stone and Josh Pyke, with the assistance of the Australian Institute of Music (AIM) have created a podcast, It’s Raining Mentors which will help set you in the right direction.

Elana has had a successful career as a solo artist and is also part of the ARIA-award winning quartet, All Our Exes Live in Texas. She also tours with Missy Higgins and John Butler and is respected widely within the industry. Josh has also won ARIA awards. Breaking out with his debut album in 2007, Memories & Dust, Josh has had a prolific and successful solo career. His next album To Find Happiness is due to be released on 18th March.

They promise to cover topics such as what to expect from a record label, what booking agents do, what it’s like to be self-managed, and so much more. The first three episodes are out now and are informative and engaging.

I caught up with Elana last week to chat about their It’s Raining Mentors podcast.

I’m going to take full credit for that. I thought of that, Josh didn’t

Yeah, I figured that. It sounded like your work. I’ve listened to the first 2 episodes, it’s not just the name that is excellent. How did the Podcast series come about?

It was really Josh’s brain baby. A lockdown project for us both. Josh is a real doer – he has these wonderful ideas outside music. We’ve worked together quite a bit, so when he said he wanted to work on the podcast, I knew it would happen.

I wanted to stress to him that I’m pretty naïve about all things in the music industry. So for me, it was an opportunity to re-educate myself. And coming out of the pandemic it’s such a changed world. It’s a good time to have conversations with people and see not just what has been happening, but what we want to happen.

Through teaming up with AIM and MusicFeeds we got it to happen.

Our next guest is Marihuzka Cornelius, who is the head of A&R at Ivy League, and also in a cool band called Bloods. And we also talked to Katie Rynn who is Village Sounds’ lead booking agent. We’ve talked to Fanny Lumsden. We’re going to talk to people from APRA, PPCA (PPCA is non-profit copyright collecting society that provides blanket licences for the use of recorded music in Australia), session musicians and heaps more.

We’ve got lots of plans. We’re trying to cover what the future of the music industry could look like

Are you still recording episodes?

Yes, we made 4 episodes and we’re going to see how they came out and responded to. We’ve had a good response so far, with Tom Hogan producing, and we’re going to roll them out week to week, so it will be a gradual drip-feed. We should be busy for the next few months making it. As many diverse people as we can find to talk about the industry 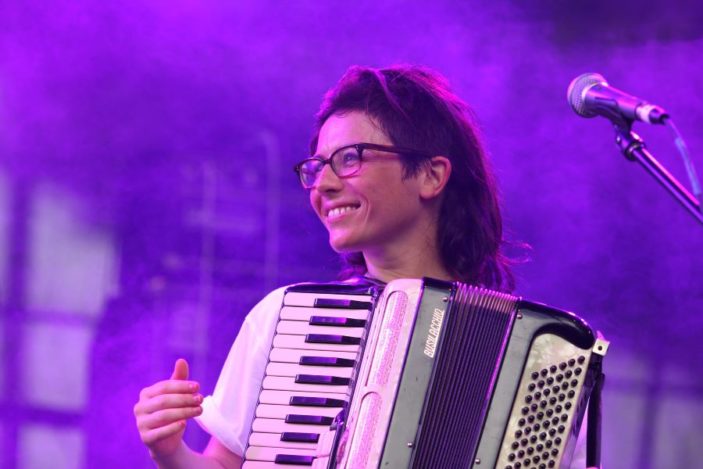 These days, it’s easy to get going as an artist. Anyone can get going in the bedroom, record and set it free through the interwebs. I’m guessing this will let them know how to make the next steps

For sure. When I started as an emerging artist, I don’t have this information. I didn’t know the difference between having a publishing deal and having a publicist. I was clueless and scared to ask those questions.

There’s more information, and this is a way of hearing those people we revere in the industry like Dan Rosen who is the head of Warner Music, talking about how to go about putting your music in front of people like that. He was an independent artist who emerged through Unearthed and ended up the head of PPCA and then moved onto the head of Warner. He has worked on both sides. It’s good to know those guys are musicians and music fans and are like-minded people rather than this kind of us and them concepts which I think a lot of young artists and musicians have.

How should people go about trying to find a mentor?

That’s a really good question. I think artists are really open to speaking to other artists. On Instagram and Facebook, and I suspect TikTok, you can reach out to people and ask questions and ask to meet up for a coffee. I think collaborating with ideas as well as music happens more than you would think.

Having the momentum and the courage to approach people you respect. It might be people at the local pub. My heroes were always Sydney jazz musicians like Jonathon Schwartz and even Jade McRae even though she was only a couple of years older than me. I really revered those people. Going up to them and establishing a relationship became a mentor relationship, even though it didn’t feel like that at the time. These people shepherd you through your life in music and the more you put yourself in a position of vulnerability and saying hi, the more these people are going to think of you when opportunities come up.

You’ve popped the question on the first 2 podcasts, what would you say to your 20-year-old self. What’s the answer to that one for Elana Stone?

I never had a good answer to this. I think my parent’s friends used to say to me “it’s a hard road you’ve chosen”, and I used to think that’s a really strange thing to say ’cause in my mind, there was no other road. This was absolutely what I was going to do. And I still feel that way, so I don’t think there is anything you could have said to my 18 yr old self to discourage me from becoming a musician.

I think if anything, it’s just continuing to be courageous and continue to back yourself. It’s the trickiest part for someone like me who makes my own music and represents myself. I’m an independent artist. Our band, All our Exes Live in Texas has had management, booking agents, and all those wonderful things. I think building a team is really really important, and if you are going in to bat for yourself it’s very much about bouncing back from rejection and having a pretty thick skin, so I still have the same advice that I’d give to my 18 yr old self. Just keep going, not everyone is going to get you or like what you do or what you make, but if you are determined to do it you will find those like-minded people and they will help you get to where you need to go.

How do you think it’s different now from when you started out?

I think music schools like AIM and Southern Cross etc offer management courses, recording techniques, and what you need to do to start a small business.

How to do tax as a sole trader. There are so many things as a musician. You become a graphic designer, a publicist trying to get people along. They are all really important. Kids are way savvier about those sorts of things. They have access to the internet and are being taught that. It’s really great. There are fewer mistakes in public than there used to be.

Fanny Lumsden is a great example

She’s running a touring company, her own record label, she’s self-managed, she’s a bad-arse. She’s doing it together with her partner Dan. And somehow manage to live in the middle of the country, and have babies. She’s created her own brand and built that business around the way she wants to live and perform. She can’t be fired! She’s created her own job. Fanny would be a great mentor.

If people want to contact us – do so via my Instagram or FB pages, or Josh’s IG or FB page – we’re really up for suggestions on what they want to hear talked about on the podcast. That’s a good place to give feedback and requests.

Who died and made us arbiters of the music industry? I just want people to know that I have no idea what I am doing, and this podcast is helping me as much as it is helping anyone else. We are all learning, especially coming out of the pandemic. We are all re-learning and re-mapping things, creating diversity in the workplace, making workplaces safer, we need to discuss maternity leave, superannuation, things that people expect in their workplaces which for some reason we don’t have. Having these conversations is important if we wish to change things for the better

Exactly, but no one cares to talk about it, It will be the bane of our existence when we are too old to make music or tour.

You can listen to the It’s Raining Mentors podcast, wherever you pick up your podcasts from.

If you want to provide Elana or Josh with feedback and/or suggestions for new topics, contact them on their socials below

Photos of Elana Stone and Josh Pyke by Bruce Baker