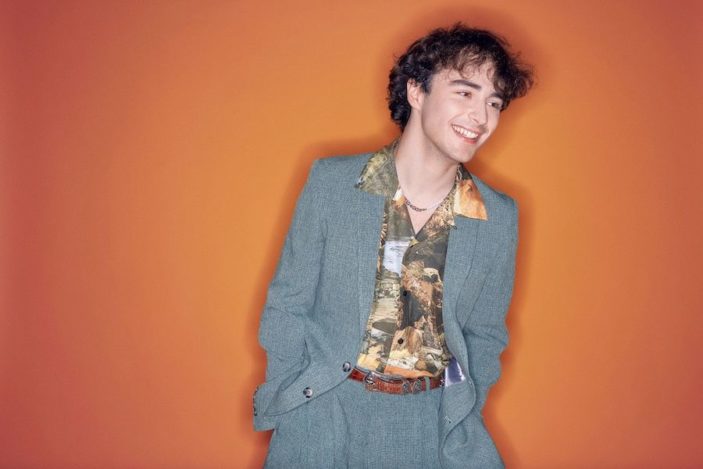 Alfie Templeman has only just turned 19, but already counts seven EPs, a mini-album and soon his debut album Mellow Moon under his belt.

Alongside these feats, he was shortlisted in BBC’s Sound of 2022 list, is self-taught in approximately 11 instruments, has perfect pitch as well as a surplus of 700 songs sitting on his hard drive and will be heading to Australian shores this June to support The Wombats alongside his own solo dates.

It would be a gross understatement to call this artist anything short of incredible. His dedication to music shines through in meticulously crafted songs that pay homage to Templeman’s idols such as Todd Rundgren and Rush, but also reach a wide array genres spanning from pop to progressive rock, folk to indie RnB.

His most recent offering ‘Colour Me Blue‘ is a shimmery indie pop “love song about that wave rushing through you that you feel when you fall in love.”

It was co-produced with Circa Wave’s Kieran Shudall who, as Templeman says, is “just like a really positive person. Like when you’re in a room writing a song with him, it’s all about how good it feels and he just brings that every time. Like every time I made a song with him, like we always shape it into something that feels really just full of energy. He captures his energy and his songs really well.”

The bright bubbly moment stands out on Mellow Moon (out May 27), as Templeman tackles his mental health journey from the past two years, going through bed-bound bouts and a coming-of-age identity crisis in the middle of a locked down world.

“I feel like when you’re 17, you learn a lot about yourself anyway, but in a pandemic when you can’t really go anywhere, you learn even more strangely because you have to live in your own mind for so long. So weirdly, when I came out the lockdown, I was good for a while, but then I actually went into a pretty big depression like around last year now, because I was like, ‘well, where am I meant to be now? Am I meant to like, am I meant to be extremely productive?’ Because it felt like all of a sudden I had all the freedom in the world, so it felt like I could do anything. But actually it just made things worse,” said Templeman.

His album helped his to pick up the pieces again, working with collaborators that renewed his lease on life, dipping back into unfinished ideas on his defunct Bandcamp page and creating a powerful body of work to put a full-stop on this transformative period.

Catch the full chat with Alfie Templeman about Mellow Moon, mental health and his driving exams BELOW:

‘Colour Me Blue’ is OUT NOW.