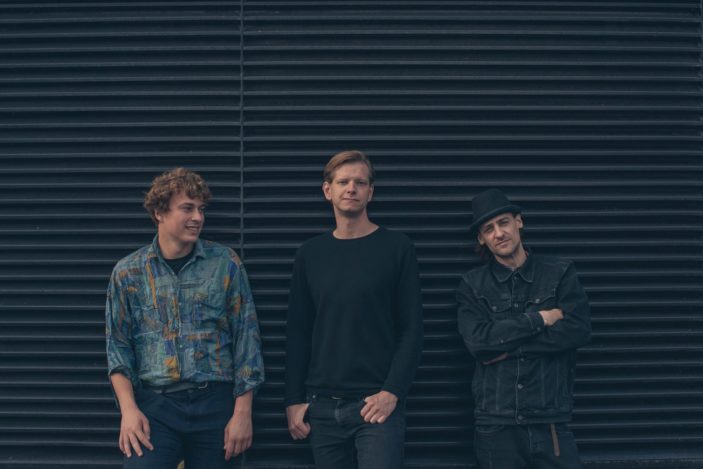 Mama Roux are a three-piece ‘garage’ rock band from the outskirts of Amsterdam. The trio, made up of Maarten (drums), Patrick (bass), and Lukas (guitar), have not long released their debut single “Big Fuss”.

The single, the first from their forthcoming eponymous EP, is a satisfyingly explosive blend of garage and blues rock. It’s raw, energetic and no frills fun. The song grabs your attention right from the start; and you just know that performed live that it’d have you on your feet in no time at all.

To celebrate the release of “Big Fuss” and to help us get to know them a little better, Maarten, Patrick and Lukas have put together this playlist for us highlighting some of the songs that influenced them as a band, and influenced the creation of “Big Fuss”. So, hit play, and let me hand you over to Mama Roux:

Drawing from influences ranging from hard rock and delta blues all the way to funk and boogie, it showcases our diverse backgrounds as well as the melting pot that created the roux we stand for.

First of all Led Zeppelin is one of our main inspirations – and what we bonded over when we met at our very first jam session. But this is also one of their most groovy and dynamic songs which just makes you want to move, groove and let loose.

This song is simply amazing. The way the guitar, drums and bass work together to create a wall of sound which compliments all the strong points of each individual instrument should be an inspiration to every three-piece band around.

When the hook of this song hits, it’s no holds barred. That’s something we like to do on stage as well. We locked ourselves in a house last year for a week of songwriting, and this was one of the songs we had a lot of fun with, just jamming to it in between sessions to ignite the creative process.

The raw and bluesy sound of this amazing 2-headed band is simply unmatched. The distorted guitar with overdriven vocals and punchy drums on this song really fit our inspirational palet. Even our bass player Patrick doesn’t even mind that there’s no bass…

The music of The New York Dolls is best when you listen to the live performances, due to the atomic energy explosion they create on stage. We too are a band that thrives in a live setting. Studio recordings are one thing, but live you see us doing what we do best – explode into an energetic musical extravaganza. Furthermore, you could state that – because we refuse to pick one genre to play – we have a bit of a musical personality crisis.

One word here – tone. Our guitarist Lukas has been searching all his life to find one equal to this. The search goes on….

Such a blues legend! His delta blues repertoire speaks for itself. However, here he strips it down completely and shows how only groove and rhythm can be quite enough. Mysterious, driving and timeless.

This song is a perfect example of a killer bass line on steady drums, making great use of dynamics. Not much guitar in this song but when it’s there, it’s funky. If there is one constant in our versatile repertoire, it’s that we all love rhythm and groove.

One of the definitive funk bands. Their sound is such a wonderful mix of mystery, groove and melody.

Can’t really make a list like this without acknowledging the song that named us. The artist, as well as the city of New Orleans, are such a perfect example of what happens when different people, music styles or cuisines meet.
Roux is a base that you can add anything to, and before the New Orleans scene, no one thought jazz and blues could go together, or french and southern cooking. It’s that daring edge where the unexpected meets that creates magic.