It was a warm and overcast day on Friday in Adelaide, which made for perfect conditions for Laneway Festival. Since humble beginnings in the laneways of the Adelaide University grounds, Laneway Festival has grown in harmony with the improvements around Hart’s Mill on the Port River. This year there were four stages playing a good variety of genres.

Oliver Tree was a popular draw card early in the day on the Lion Flour stage. With his mop top antics and over the top bright clothing, he created mesmerizing performance that set the bar high early in the day. Down at the Friends and Freedom stage, American crooner Omar Apollo was equally a stand out, despite the quite different styles of music. The moves and grooves exuded pure sexual energy that was lapped up by the predominately female audience. 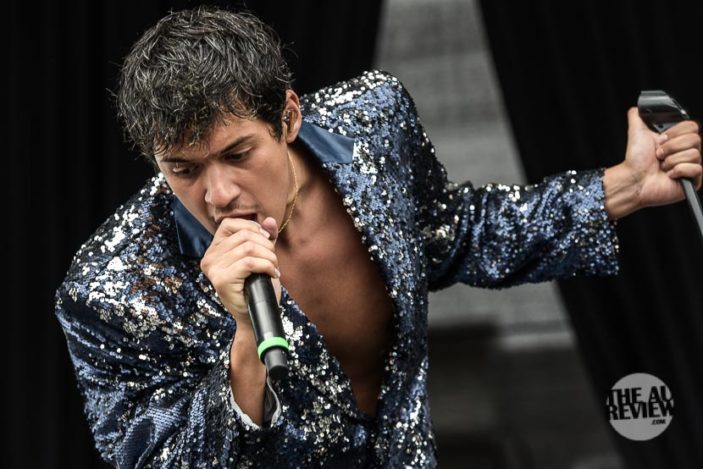 One thing that Laneway Festival prides itself on, is the promotion of diversity, which was reflected in having the Girls Rock stage devoted to female artists including Hatchie, Kučka, and local favorites, Stabbitha and the Knifey Wifeys. The hard rocking tattooed girls know how to bring the house down which they did early on in the day. 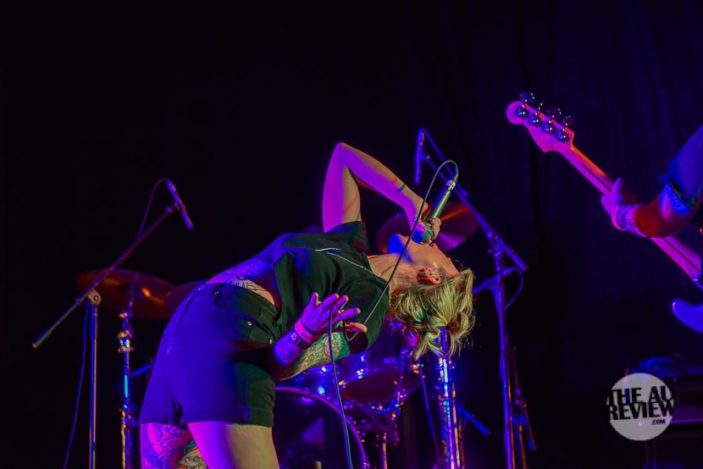 There were many other female artists on the bill, including Benee and Tones and I on the main stages. Benee is such a delight to watch as she twists and contorts with obvious enjoyment. She loves the crowd and the crowd loves her. 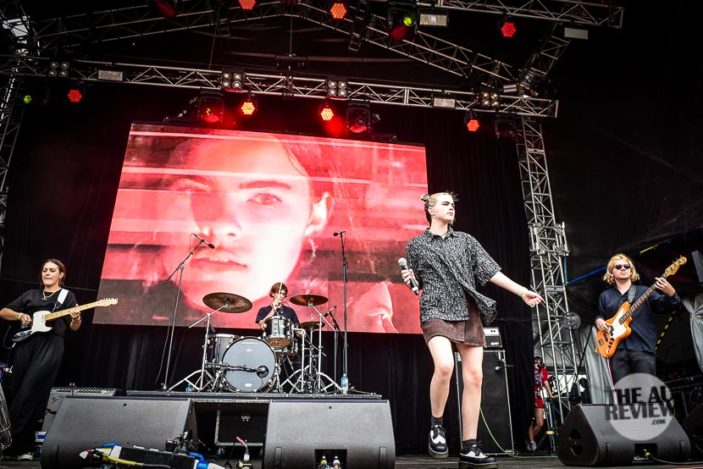 Tones and I seemed genuinely overwhelmed by the attention on the back of her success in the Triple J Hottest 100 with “Dance Monkey.” Other songs “Johnny Run Away” and “Never Seen the Rain” had sing-a-longs that genuinely lifted the crowds spirits. It was such a fun set to watch and Tones and I seemed to enjoy it even more. 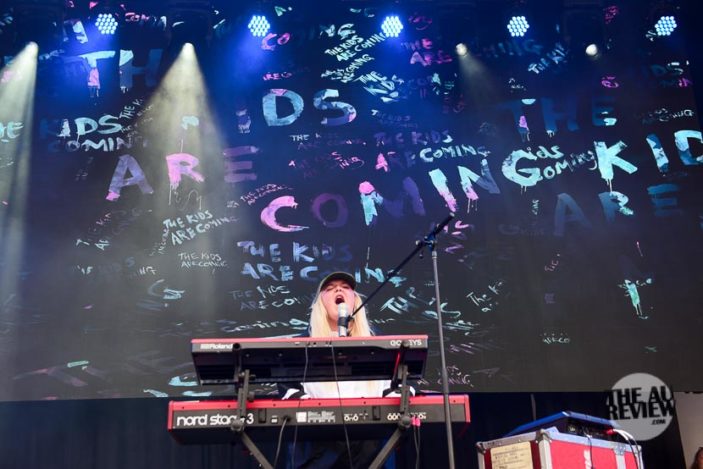 Back at the Friends and freedom stage, Spacey Jane drew a loyal following with their hard rock guitar driven beats. 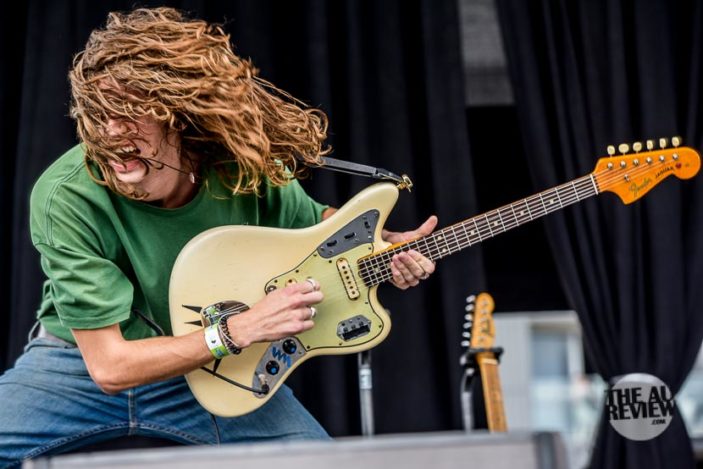 Hockey Dad need no introduction and played their own blend of hard surf rock over on the Lion Four stage. Drummer Billy Fleming and singer / guitarist Zack Stephenson have a couple of albums under their belt and know how to please the crowd. 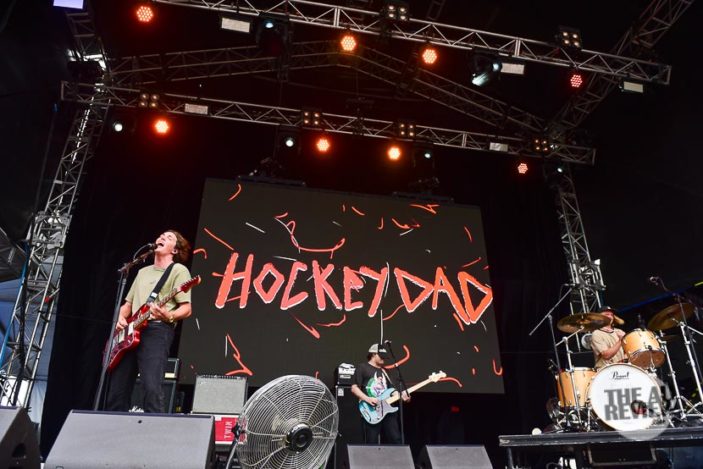 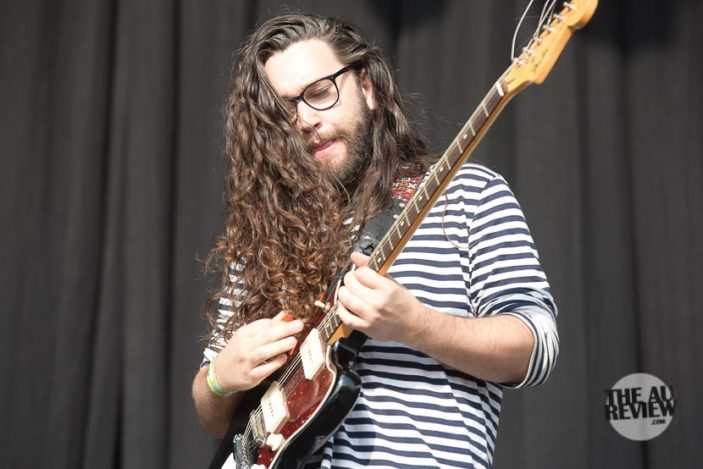 It was a complete change of pace with Earl Sweatshirt, with laid back raps and slow grooves. Earl’s creatively languid style swings  highly personal alt-rap to morbid horrorcore and the smell of weed hung in the air. 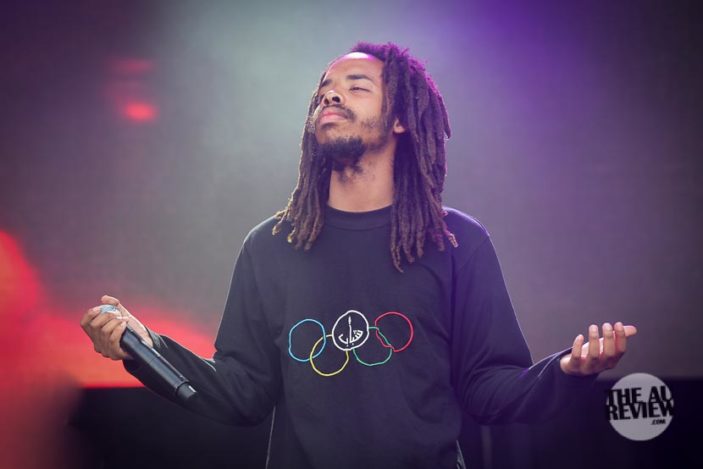 DMA‘s have evolved from being a purely Oasis cover band to one that is taking on a sound of its own. The stage presence is more laid back and the music more rock / dance orientated. Monster hit, “Delete” still gave the crowd something to sing along to and is still a beautiful song. 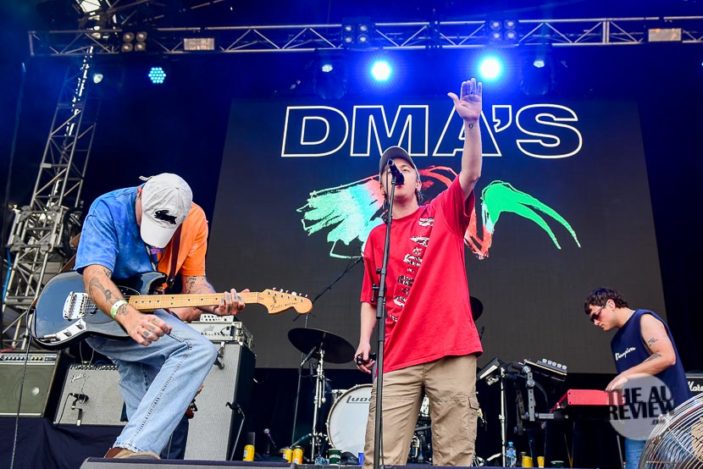 After a minor stage mishap with lead singer Ray Dalfsen, West Thebarton put on their usual hectic hard rock performance. They are getting more polished with every performance and their touring has created a solid fan base that has many singing along with “Bible Camp” and “Stuck on You”.

Ruel Vincent van Dijk (born 29 October 2002), known mononymously as Ruel , is an English born Australian singer-songwriter from Sydney, best known for his singles “Don’t Tell Me” and “Younger”. Despite his young age, Ruel knows how to command a stage. With a voice that has a huge range and maturity and stage moves that captivate and amaze, Ruel is definitely a young talent to watch. 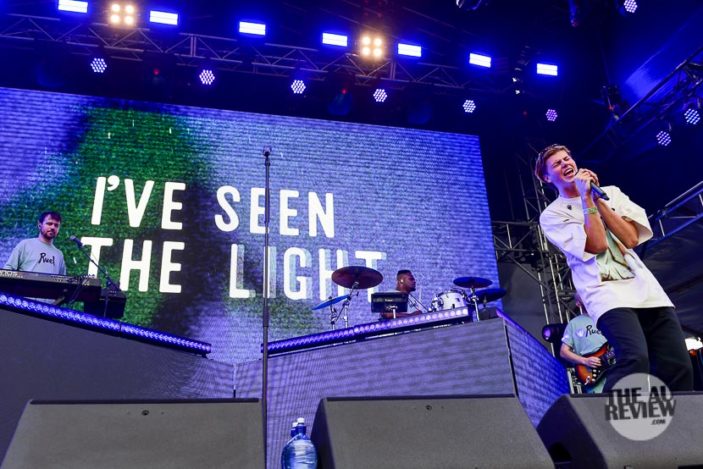 As  the sun began to set, Ocean Alley played their style of alternative reggae-rock. Lead singer Baden Donegal has a voice of an angel, hitting high notes with ease yet able to summon strength and power. 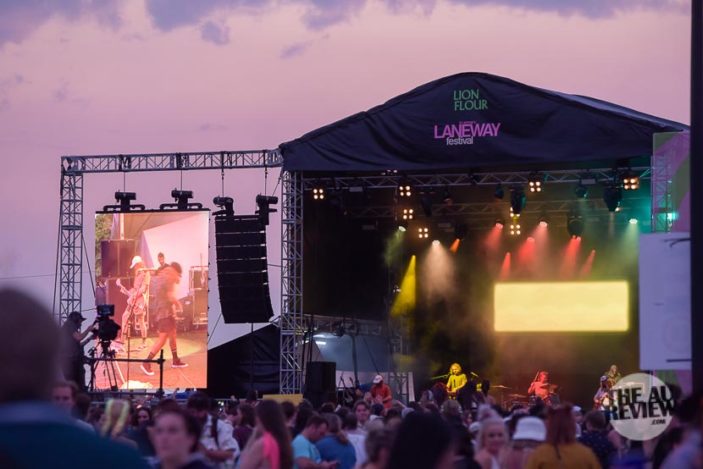 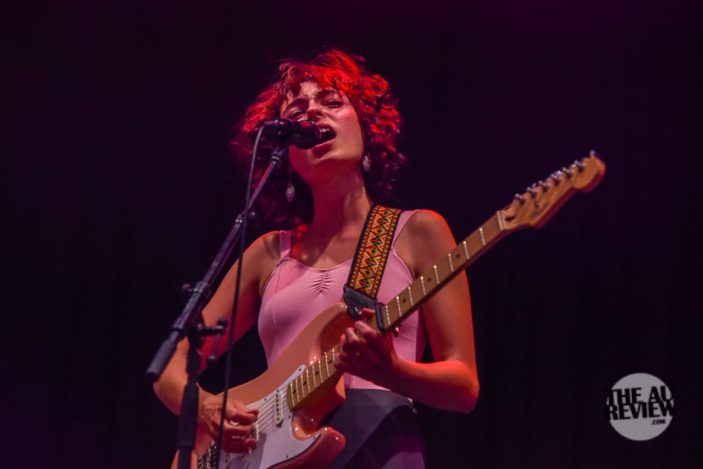 King Gizzard and the Lizard Wizard are the kings of Australian psych music in a sense and their antics on stage, bending sounds and light seemed to have an effect on the weather. “Is it going to piss down?” The heavens did open up but only for a short time, but the band played on regardless. Meanwhile The Chats were singing about smoko, pub lunches and getting the clap. 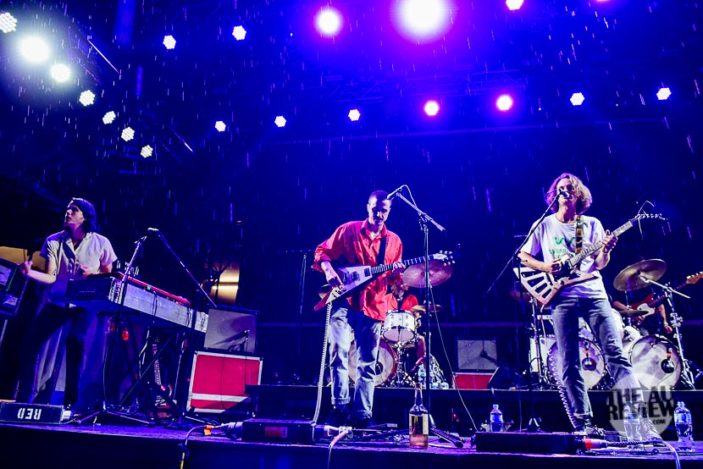 Charli XCX arrived on stage in a stunning white outfit that was a stylized straight-jacket but this is way to simple a description. Dark glasses, long purple hair, hooks and streamers all added to the look, but the vibe was pure energy and fun. Her Icona Pop cover “I Love It” was a popular sing-a-long that set the pace for the rest of the set. 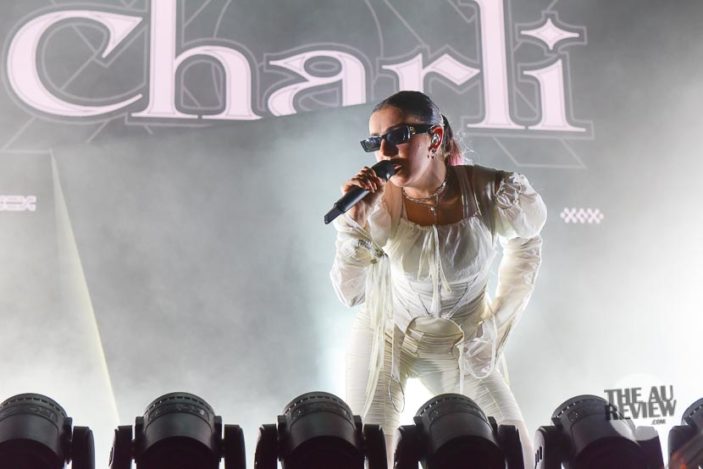 Closing act on the main stage was The 1975. With tortured lyrics and lead singer Matthew Healy’s contortions, it was fascinating but almost difficult to watch. Healy throws his whole person into the performance. contorting, writhing and dousing his hair with water to cool down. Mid set, a montage of earth images over the speech from young climate activist Greta Thunberg reminded all those present that the future lay in their hands and that global action is vital. Like that, the day was over and the crowd stumbled out. A fantastic day of music with a great variety of local and international acts. 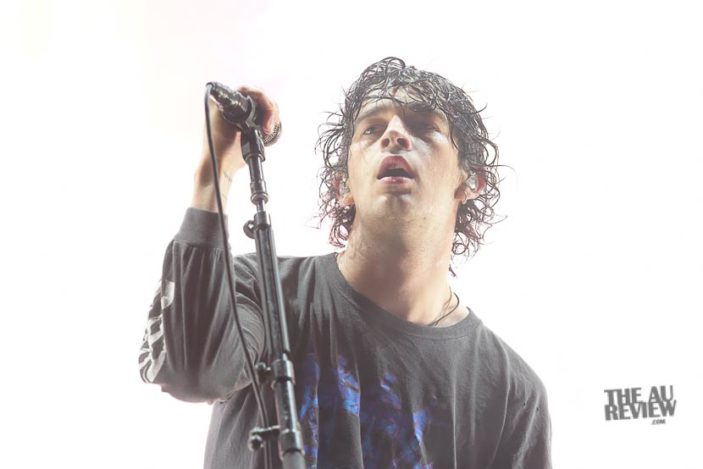 All photos by John Goodridge

For more about the festival, head to lanewayfestival.com.