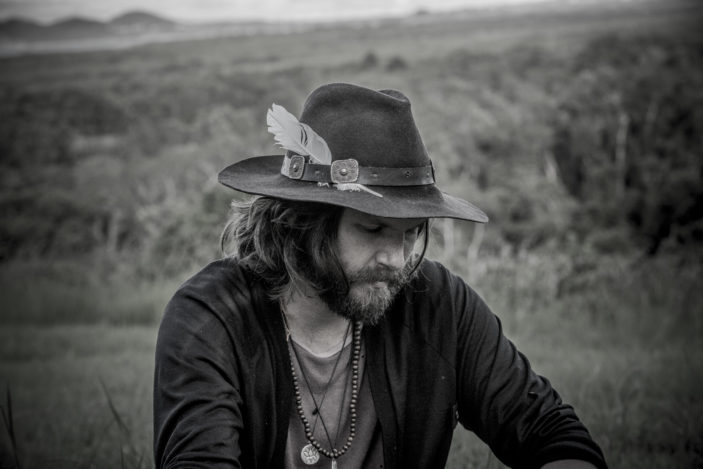 Gold Coast-based artist Black Rabbit George is all set to release his new album, Warren, next month. But first, comes the delightfully dreamy lead single, “Fingers Radio”. We’re excited to bring you this exclusive first taste, psychedelic visuals and all, ahead of its official release date tomorrow.

Black Rabbit George is the new project from Tijuana Cartel guitarist and singer-songwriter Paul George. Whilst he’s still very much committed to the band, the new project is seen as an opportunity to further explore the acoustic guitar and his interest in folk and roots music. As George explains it, “I want to follow a path that embraces the great loves in my life: my guitar and the wealth of stories that life simply places in your way.”

“Fingers Radio”, with its perhaps unconscious nod to George Harrison, is a dreamy melting pot of psychedelia, folk and indie-rock. You need only look at the accompanying visuals to realise that signifiers like “dreamy”, “pensive”, “trippy” or “hypnotic” seem remarkably apt. As you would expect the guitar work is deft and impressive. Despite the etherealness of the vocals, “Fingers Radio” is surprisingly unwavering and propulsive, thanks to that resolute rhythm section.  And, whilst its folk credentials are clear, you only need to hear that flamenco style guitar work, its a song that’s also perhaps ripe for remixing.

Here’s what Black Rabbit describes as the motivation behind the track:

“I spent a lot of time isolated at home toying with ideas I’ve had over the years. I’ve pretty much lived in the studio for the last six months, just toying with where I can take the things I’ve learnt and how they all make sense together. “Fingers Radio” is one of the songs that came from these sessions.”

Sit back, relax, and give “Fingers Radio” a spin below.

Black Rabbit George will be performing alongside Felicity Lawless at Home of the Arts on the Gold Coast this Sunday. For more information head HERE. Tickets are also available for the Album Launch show at Mo’s Desert Clubhouse on August 21st. Head HERE to register now.