Today we’re excited to premiere the brand new album from Melbourne party jazz collective The Lagerphones, who have gained themselves quite a following in Japan. Off the back of this, and ahead of their fourth tour of the country in as many years (with 15 mostly free shows across 15 days), the group are set to release a new Japan-inspired record ATARA-CD (あたらシーディー).

It’s appropriately the six piece’s fourth record, and features seven new original Lagerphones songs, as well as the classic traditional Jazz number “Royal Garden Blues”. They say the album – which will be released with a free launch party in their hometown on 26th August – is a love dedication to the many great memories and friends the band has made in their second home city of Tokyo.

Be the first to listen to the full album below, and then read on for a full track-by-track of the release, the details of their Melbourne album launch on 26th August, and their Japanese tour dates!

Track number 1, ‘Two Dollars at the Pokies’. Take a journey into the gaming room and experience the flashing lights, joyful melodies and free tea and coffee. Remember not to lose too much!

Benji’s (Ben Harrison, trumpet) ode to drinking. We’ve gotten ‘yopparai’ (drunk) many times in Nippon, here’s something to help us all remember! Melbourne via Tokyo via New Orleans. Also featuring Benji’s first attempt at writing lyrics in Japanese. How did he go?

A beautiful ballad, one for the lovers out there! Featuring a beautiful horn introduction and solos by our beloved Australian saxophone player Justin Fermino, and banjo boy Louis King switching over to his vintage Gibson Archtop, purchased on our last Japanese tour.

In Australia, it’s not uncommon to try and flip the cap of your beer at a friend, in a friendly but somewhat dangerous manner. Be careful you don’t take out someone’s eye!

This song was written by our friend Justin Fermino who has joined the band in Australia while Jon-san (Jon Hunt, Clarinet) is living in America. Justin fits into the Lagerphones like a hand in a glove, and this song is another beer drinking Lagerphones classic. Plenty of spirited lyrics here, my favourite being; ‘When we go to the pub, it’s like falling back in love’.

Moshi Moshi is most importantly about locating the whereabouts of the waiter, so we can drink a mega highball, and drinking together as friends because tomorrow is tomorrow, and can wait.

A classic New Orleans song, given the best treatment we can muster. Count the amount of instrumental choruses at the end! Building from almost nothing right up to a hysterical finale. 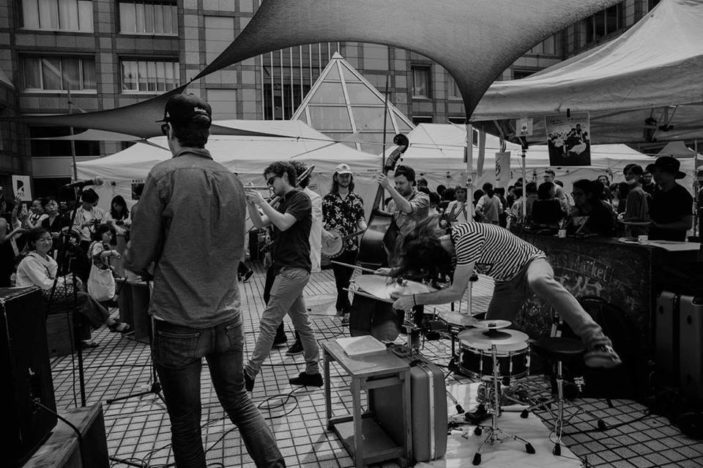 All shows are free except where marked with *

For more details about The Lagerphones, head to their Facebook Page.