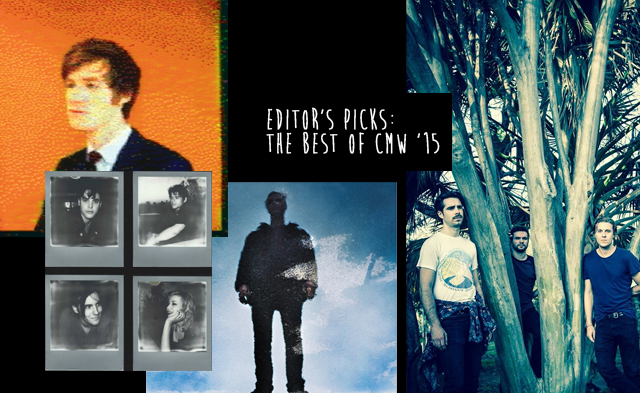 At festivals like Canadian Music Week, bands from around the world try and impress fans and industry alike in sets around the city of Toronto that rarely last for more than 30 minutes. With hundreds of bands playing, no one journalist would be able to see everything on offer. But our man on the ground – Larry Heath – certainly tried – as he jumped from venue to venue over the 4 days he attended. Here now he counts down his seven favourite performances from the week (counting performances from May 6th to 9th). The end result is a mix of expected favourites and new discoveries. Hopefully you’ll find something new, too…

Tom West was extraordinary both times I saw him perform. His voice was impeccable and managed to capture the crowd with his fantastic music, no matter where he was playing. An artist surely on the rise.

Check out the artist here: https://www.facebook.com/tomwestmusic

Sometimes it takes witnessing a band live to see what all the fuss was about. And indeed, their live set showed off a confident band, with melodic wonderfulness fronted but a stunning songstress who holds the band together and is commanding in the drivers seat. “Party Police” was a particular highlight of the set. Worthy of all the praise and buzz.

Check out the band here: https://www.facebook.com/ALVVAYS

5. The Franklin Electric (Montreal) – Osheaga Party at The Great Hall

Montreal band The Franklin Electric were phenomenal, a four piece with a high energy folk agenda, delivered with skill, precision and some solid songs. The set was a mix of unreleased material and material from their record This Is How I Let You Down. The trumpet was used sparingly but to great effect, as the lead singer jumped between guitar, keys, trumpet and vocals (with a great set of pipes to boot). People purport to be over the “trend” that Mumford set, but bands like this prove that great music will continue to be created in the genre regardless of public opinion. I for one will take this any day.

Check out the band here: https://www.facebook.com/THEFRANKLINELECTRIC

The Melbourne rockers absolutely smashed it in the small venue, with the crowd chanting for more and getting a genuine encore, with their Like a Version of First Aid Kit’s “Wolf”. The sound in the venue was outstanding, the vibe was strong and it was one of the best shows I’ve ever seen from the band. I hope we see great things happen for them in this market!

Check out the band here: https://www.facebook.com/KINGSWOODmusic

Having seen Hein a year ago at the same festival, it’s remarkable to see how much the emerging talent has grown as a performer in the same period. With his self-titled debut EP under his belt, and plenty of triple j play, he has had plenty of reason to improve, too, but it was by no means an expectation. The set he’s parading around at the moment is finely honed – the backing tracks he uses are well executed, and with additions like strings, it adds a lot to the live experience. Having only had a 20 minute set at the Sound Gallery event, I’m looking forward to seeing more of this rising star.

Check out the artist here: https://www.facebook.com/heincoopermusic

They seemed to be the band everyone was talking about this year at CMW – a new outfit out of Los Angeles called Gateway Drugs. Killer name, right? The family band come from something of music royalty – with three of the four members being the children of The Knack’s Preston Niles. Sharing vocal duties, the band bring about an early Dandy Warhols meets Hole vibe; a nice dose of grunge with some psychedelic elements thrown in for good measure.

Though you know you’ve heard that sort of thing before, what separates this band from the rest is that in a genre that usually settle for middle of the road “jam” material (not bad by any means, but mostly the “same”), is the key ingredient: the songs. They are killer. They’re just catchy enough to get you moving, but not so much that they’re trying too hard. Honestly it’s some of the best material I’ve heard in the genre for a very long time. A track which may have been called “Feels So Bad” was a highlight – it felt so good. While other tracks, with lyrics like “Can’t Get Satisfaction” proved their a band who wear their influences on their sleeves.

Their new record Magick Spells is getting an Australian release through Cooking Vinyl Australia on May 29th. They worked on the album in Dave Grohl’s studio. Look out for it; expect big things. I can’t wait to get my hands on it.

Check out the band here: https://www.facebook.com/GatewayDrugs

And finally, we have another buzz artist of now, UK artist East India Youth, who is blowing us all away right now with his new record Culture of Volume – the supporting tour of which brought him to Toronto. He was immediately busy when he hit the stage, with an instrumental number before launching into the high energy of “Turn Away” as he added some live bass guitar into the mix, to fine effect. “Looking For Someone” and “Hearts That Never” weren’t far behind and were among the highlights of the 40 minute set. The latter track added some particularly interesting video game=esque samples into the mix.

Already a more than impressive endeavour for a solo artist, William Doyle closes things out with an epic and intense intrumental, trashing away on his keys like it was a heavy metal concert. He is without question one of the most impressive performers in the electronic world right now, and one of the most exciting live experiences since Robert DeLong took to the stage with his many drums and Wii Remotes a couple of years ago.

Check out the artist here: https://www.facebook.com/eastindiayouth

Stay tuned to the AU for more coverage from Canadian Music Week!