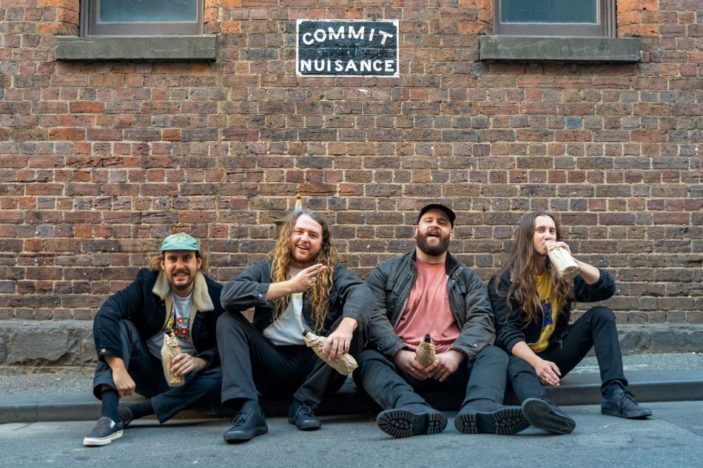 Brisbane’s 4-piece, Beddy Rays have today released their self-titled debut album. The band, from Redland (Reddy) Bay has been cranking out the hits, and continuing with the puns, since the breakout single “Sobercoaster” in 2020. That release has racked up an astonishing 3.5 million streams.

They’ve got to the stage of delivering their debut album relatively quickly, and it’s fair to say with a full sail and plenty of excitement.  “When we started a band many years ago as young whipper snappers in Reddy Bay all we wanted to do was play gigs, sink tins and chat to all the legends we’d meet along the way. Now we have our very own album firmly in our grip, and to say we’re excited is a major understatement. We decided to go with a self-titled album for our debut because we believe this album IS Beddy Rays through-and-through. It’s made up of our recent singles and a bunch of brand newies we’ve been cooking up for you legends. A nice mixed bag of lollies! We hope you love it as much as we do!”

The album was produced by Brock Western and Beddy Rays, and was recorded at Brock’s place in Brisbane.

To celebrate the release of the album, Beddy Rays have announced a national tour in August and September. Dates and ticket links are below. They’ve also scheduled a bunch of record-store signings. The details for these are also below.

Finally, the band has put together ten little-known facts about the band. So do press <Play>, crank it up loud and read on to arm yourself with the facts about these favourite sons of Redland Reddy Bay.

1. The whole time we were at school together, we were never all in the same class at once.

2. All four members are qualified tradesmen.

4. When we were young, Lewy once rolled his ankle on an avocado and missed footy training. Jacko still reminds him about it to this day.

6. Jacko wrote his first song in grade 7 about one of our teachers.

7. We’ve all lived together but never all together at once.

8. Our first flight as a band was an international flight to Thailand to play with Dune Rats, Hockey Dad and Verge Collection in 2019.

9. We’re most likely younger than you think we are.

10. We still rehearse in Reddy Bay even though none of us live there at the moment.

Presented by Select Music and Artists Only – Tickets on sale now via www.beddyrays.com