The line-up for Boardmasters 2020 has dropped and it is huge! Celebrating its 40th Anniversary, the Cornish-based festival has dropped a hundred plus strong line-up. Skepta, Kings Of Leon, and The 1975 are amongst the headliners of the three day festival.

Joining them will be a handful of some of Australia’s finest too. Indie surf rockers Caravãna Sun will take to the main stage on the Friday. Also playing on the Friday are Byron Bay’s Tora and London-based Australian born DJ HAAI. Meanwhile, Alex the Astronaut, Riley Pearce and Hollow Coves are all set to play on the second day of the Festival. Then, singer-songwriter Tay Oskee plays the Sunday. Other artists on the bill include, The Kooks, Mura Masa, Sam Fender, Loyle Carner and Dizzee Rascal.

The festival, which takes place in Newquay, Cornwall, runs between the 5th and 9th August, and incorporates the World Surf League qualifying series. It is one of the biggest events in the region, with upwards of fifty thousand people expected to make the trip down. The 2019 edition of the festival unfortunately had to be cancelled due to severe weather forecasts. Hopefully, the weather will remain clear for the 40th anniversary.

Here’s a full look at the line-up: 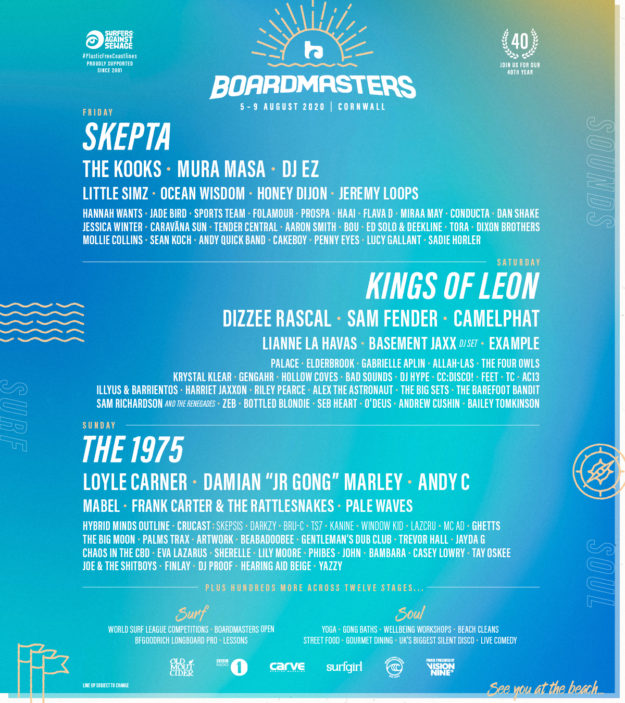 Tickets for Boardmasters 2020 are on sale now. The price for the Standard Weekend Ticket, which includes 5 nights camping comes to £179. VIP tickets will set you back £265. Day tickets are also available. For more information and to purchase tickets head HERE.