Agnes Manners is the brainchild of former Hellions member Matt Gravolin. His output as Agnes Manners, however, is slower and quieter than what Hellions fans might expect, allowing for Gravolin’s sleek baritone voice and poetic lyrics to really shine.

Agnes Manners has since expanded into a full band lineup including Lachlan Monty and Alexander Trail of Bad/Love (formerly of Make Them Suffer and Storm The Sky, respectively) and CJ James of Cottonmouth. “These people are incredible musicians and some of the most beautiful people I’ve encountered here in Melbourne,” says Gravolin.

Fantasia Famish was recorded in Thailand at Karma Sound Studios in Bang Saray. Frequent collaborator Shane Edwards (Hans Zimmer / Trophy Eyes / You Me At Six / Hellions) handled the production, mixing and mastering of the album. On the duo’s 14-year working relationship, Gravolin says “There isn’t anybody else who could have nurtured this project to life in the way he did.”

During Gravolin’s time recording in Thailand, he produced a diary and photo album. The AU is delighted to share with you Gravolin’s experience.

The recording of Fantasia Famish was a unique experience. It was the first time that I’d written and recorded an album without a band and without label support which was as exciting as it was daunting. I’ve always tried to avoid adhering to any genre limitation whilst writing but non-linearity had become increasingly difficult to achieve when you’re so aware of how your listenership perceives your music and what they expect from you. You tend to subconsciously abide by it because there’s safety in it. Because there wasn’t any expectation to speak of, a new sound was able to come out of me, it was more reflective of the folky, lyrically forthright stuff I had been listening to.

This is the 6th full-length I’ve recorded alongside Shane Edwards and the 5th that we’ve recorded at the beautiful Karma Sound Studios in Bang Saray, Thailand, but we employed an entirely new process this time around – the songs were prepared to a state of near-completion before we started actually recording them and that allowed us the time to pay closer attention to whims of experimentation. Although this is the most heavily orchestrated body of work that Shane and I have worked on together, it’s also the most sparse – most of the songs began with only traditional chord shapes and a vocal melody, and by honouring that minimalist foundation, the larger sections of the album felt much more expansive.

The process felt very organic. Shane and I were able to stop and smell the roses more frequently and just enjoy each others company. I think that our relaxed approach enhanced the sound of the album in an incredible and unprecedented way. Fantasia Famish is, at its heart, a lucid documentation of how I was feeling and what I was going through at the time of its composition but it is also an eternised reminder of a beautiful month-long adventure that I shared with an old friend. 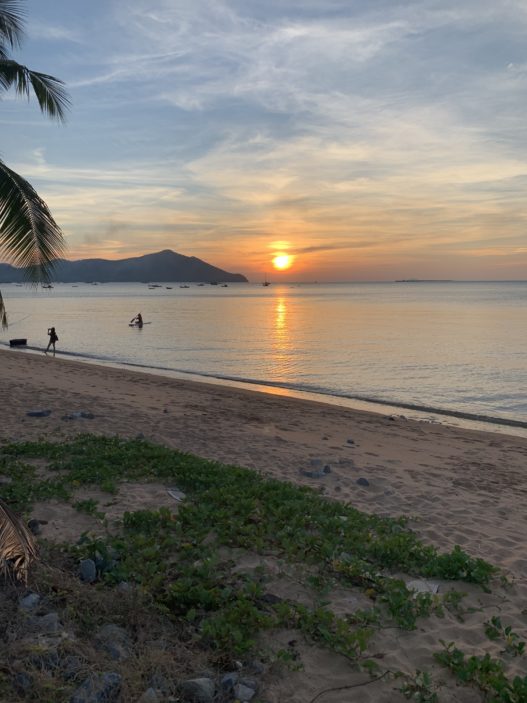 1. Bang Saray Beach
This heavenly spot was a two-minute motorbike ride from the Karma Sound Studios compound. We often ate lunch at a bar that overlooked this beach and would sometimes find ourselves sitting here in the early hours of the morning after a bar crawl. 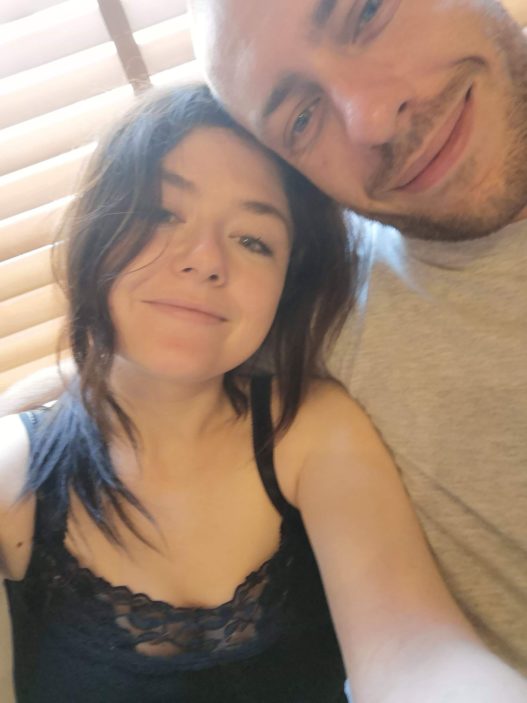 I flew Charlotte from Wales to Thailand to collaborate with me on “As Long as You’re Mine” and “Forest Swing”. She had just finished a tour with Dream State and was available only three days in Thailand before she had to go back for her next European run. We made the most of our short time together but we had only half recovered from a bout with food poisoning when she was picked up to be taken to the airport. 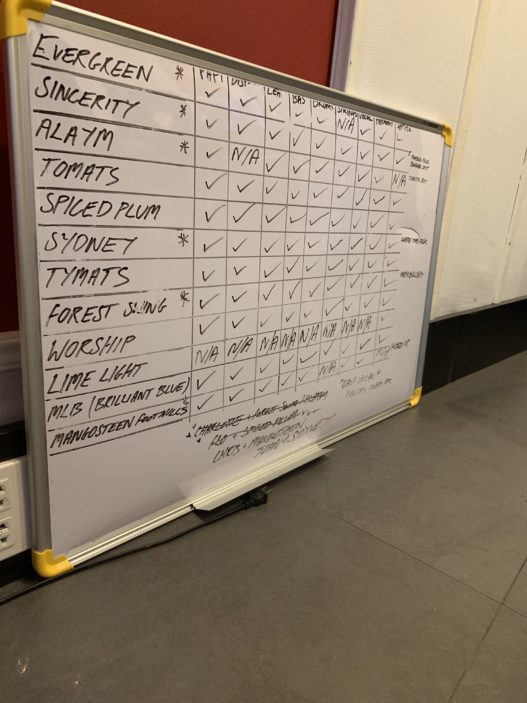 Seeing the boxes on this whiteboard fill with ticks was satisfying beyond explanation. Upon the album’s completion, I reflected on the countless hours spent tinkering with lyrics and musical details in Sydney and Melbourne bedrooms, the beautiful people that contributed to the album and how all that effort primed dozens of little in-studio victories contained within the album. 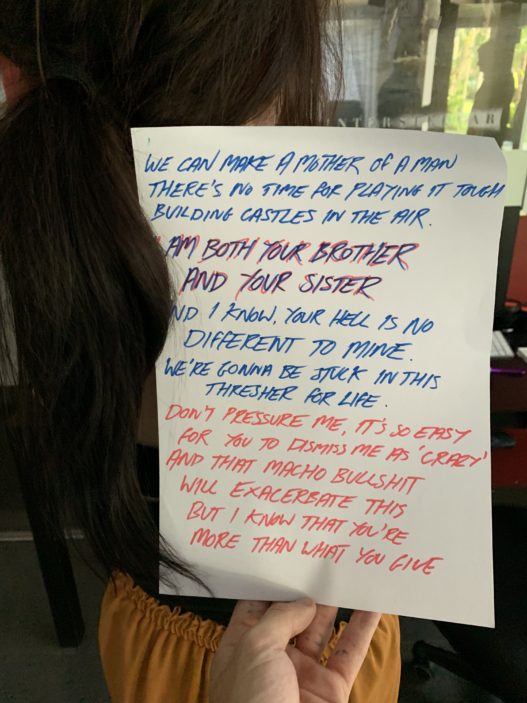 I had originally written “Forest Swing” for Hellions. The boys didn’t see it as a good fit for the Hellions record so I was glad to have found a home for it on the Agnes Manners album. The message is so important to me and I quickly discovered how important it was to Charlotte, too. That chorus of hermaphroditic triumph is one of my favourite moments of the album. 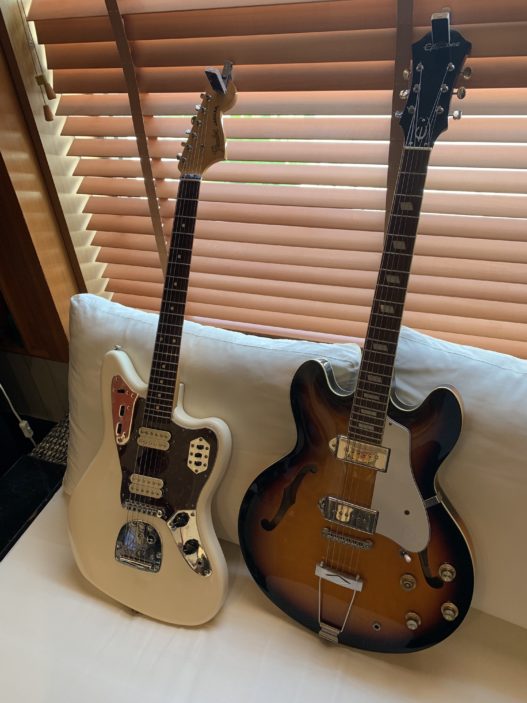 The Fender Jag was lent to me by my dear friend Sophie (Beth Crypt / B!tch) and was used on several of the albums rockier cuts, The Epiphone was a studio guitar that can be heard on nearly every song on the album – we called it The Grandfather, There’s a warm wisdom to its sound. 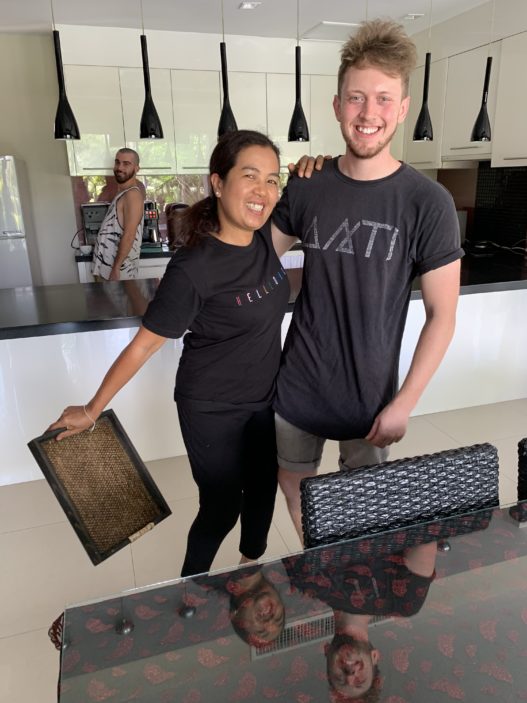 Henry Watkins (front right) is a British engineer and musician, a dear friend of mine who has accomplished some wonderful things with many artists over the past few years. Eet (front and center) is a native of Thailand and was head chef at Karma Studios at the time of this picture, she has been a friend of mine and of the Hellions guys for many years – an incredible cook with a beautiful soul. Pat Kudej (back left) is an American videographer, photographer and writer, I met him on the Fantasia Famish trip – we had a lot in common and some of the conversations we shared inspired some intimate moments on the album. 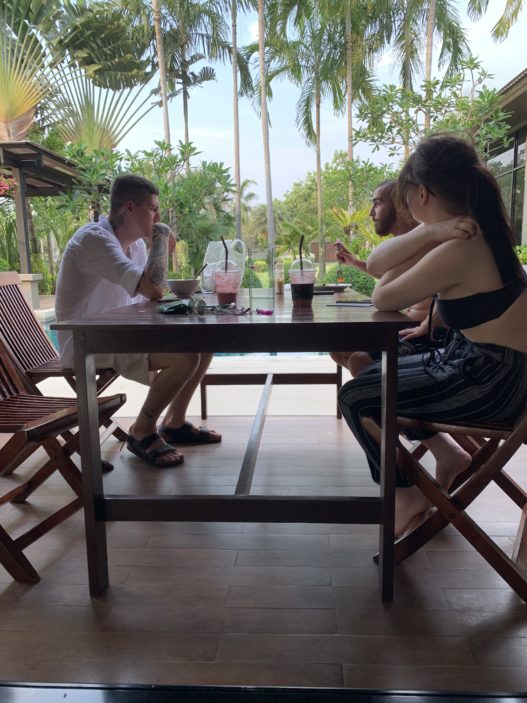 John and I collaborated on tracks “Brilliant Blue”, “Mangosteen Foothills” and “Sydney” whilst in Melbourne. He happened to arrive at Karma midway through the Fantasia Famish session in order to do some writing for Trophy Eyes – “Sydney” meant a great deal to John, enough so that it made sense for him to sing on the track too.

Charlotte, Pat, John and I came together for meals and drinks after work – we shared a lot of laughs over the course of several late nights out together, I’ll never forget them. 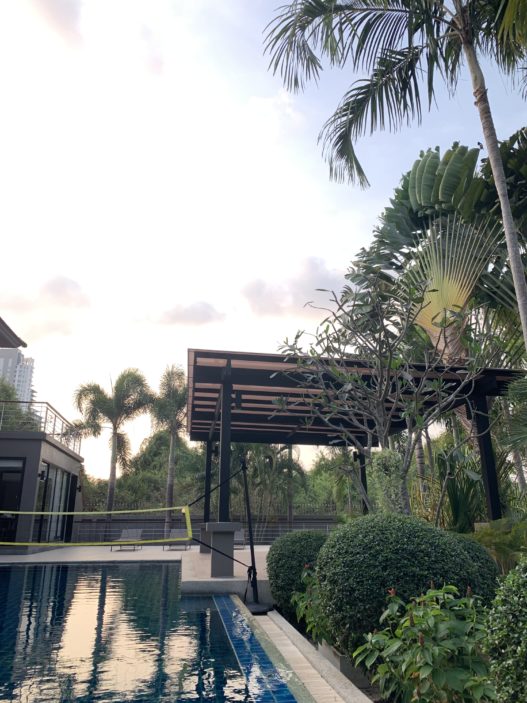 This is the central area of KSS. It’s as breathtaking now as it was when I first laid eyes on it in 2012. 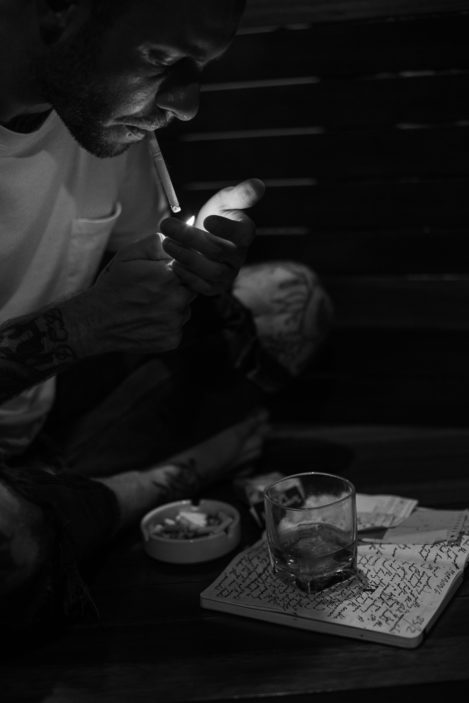 While Shane was finalising the mix on the last night of the recording trip, Pat pulled out his camera and offered to take some photos for the album’s release. We wanted to articulate the mood of the months spent writing the album in Australia – the grief that was often informing my writing process. Although I took a different path with the album art, the photos that Pat took served as reference for the cover of my first poetry collection Permanent Swim. 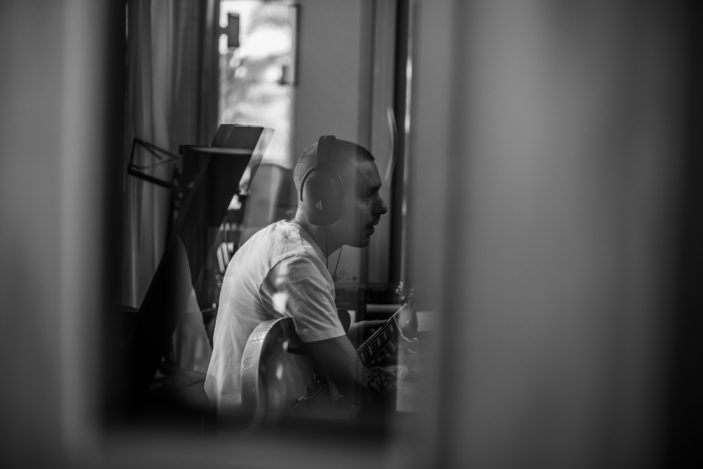