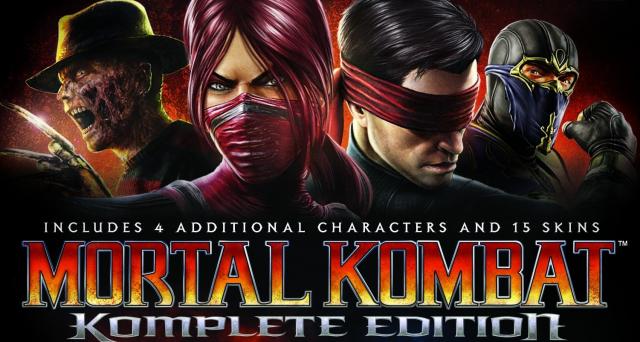 Even though R18+ classification legislation was passed in Australia nearly two years ago, there have been lengthy delays around official game releases to the public. So unless local stores had exercised their right to parallel import games early (completely legal), gamers were left to frustratingly bide their time. For Mortal Kombat fans however, this may have been a blessing in disguise. By the time the game hit our shores the Komplete Edition was available, which features all downloadable game content including additional characters (Skarlet, Kenshi, Rain and Freddy Krueger), 15 classic skins and 3 classic fatalities.

NetherRealm have wisely scrapped the full 3D concept, opting for 3D rendered characters against a 2D backdrop. This works perfectly and brings back a sense of nostalgia, when faced with all too familiar fight arenas from earlier MK games. The graphics are a definite highlight, they’re well executed and very detailed, especially some of the beasts and corpses lurking in the background, although the characters seem a little angular and stiff (the original sprite renderings seemed more fluid). Stage fatalities still exist, making smashing or liquidising your enemies using your environment all the more fun.

Players will need to go through story mode to unlock some of their characters. Unfortunately this aspect of the game hasn’t varied or improved from its predecessors. MK9 repeats the initial three MK game storyline which doesn’t have the best plot and involves fighters participating in a tournament to save Earthrealm from Outworld. A lot of the dialogue truly is cringe-worthy and the voice acting is pretty poor. However, there are some interesting character stories such as Sektor and Cyrax’s cyborg transformations. MK can be forgiven for this though, as it isn’t the type of franchise that relies on its plot to deliver a great gaming experience.

There’s not much of a lead up into a fight, if two characters are present and Tournament Master Shang Tsung pops up it’s basically game on. For those familiar with the MK easter eggs, our little friend who randomly appears exclaiming ‘Toasty!’ can now be used to bring up a Toasty bar, which fills up your character’s health meter (a very rare and incredible find!).

There is an extensive list of characters to choose from, all with their own spectacular moves and combos, which is where the new classification kicks in. Let’s not mince words, if there is a gut wrenchingly horrific way to creatively dismember limbs, blow up body parts, rid someone of their skin or wrench out an organ or two, it can be found and executed here. Maybe it’s the extreme bloodshed incorporated with writhing and screaming that makes a fatality so disturbing to watch, but seasoned gamers will most likely take it in their stride.

Being able to execute the gory fatality of your choice is now easier and whilst it’s not a new feature the inbuilt combo menu is a nice touch, although it kind of takes away the specialness of having to scour the net for those elusive moves. The execution of combos is quite difficult depending on their complexity making it a greater accomplishment when you pull one off. Difficulty levels also tend to spike throughout the game. Easy patches are shaken up by some harrowing boss fights which are exciting and annoying at the same time. The tag team element of the game is one of the best things about it, allowing you to mix-up the best abilities of two characters in gameplay.

Mortal Kombat 9 really comes into its own as a brilliant fighter game, bringing together the better elements of the MK franchise. Those who are new to MK and can handle the level of violence will have a ball with this game, as will long-time fans who may recognise and appreciate the finer hidden gems on offer. Yes the classification is completely apt, given the content, but it has that car crash quality, you want to, but you just can’t look away. Beautifully visualised, packed with great features and content Mortal Kombat 9 Komplete edition delivers thoroughly entertaining and absorbing gameplay.