The Elder Scrolls Online‘s latest expansion, Greymoor, has arrived, adding a wealth of new content to the overall game Now, the entire Western Skyrim is open for adventurers to explore. And my gosh is it just beautiful.

I’ve never actually played an Elder Scrolls game before, not even for the Switch. This makes The Elder Scrolls Online my first venture into the land of Skyrim. I know. There’s 105 different versions of Skyrim and I’ve somehow managed to avoid playing even one of them. Blame it on being Malaysian. That said, what a Malaysian childhood does impart is a love of MMORPGs. I love the ability they give you to escape into vast fantasy worlds.

And given the state of the actual planet Earth right now, Lord knows how much we need that right now.

What I love about Greymoor is that I don’t have to grind through all the old stuff to get to the new. I was pleased to see this because it reminded me of another favourite MMO, Star Wars: The Old Republic. As soon as you start the game, you’ll be dropped into the new expansion.

I love the ability to switch from first- to third-person view, giving me the choice of whether to fully immerse myself into the gameplay or not. I understand that for long-time Elder Scrolls this might not exactly be considered a box feature, but as a new player, it was very much a novelty.

Though there aren’t as many cutscenes as I’m used to experiencing but there are rather more of the minigames that come with Lockpicking or Persuasion skill-lines. Fair to say that TESO sits between SW:TOR (with full-on cutscenes) and World of Warcraft (with lots of reading) in terms of drawing you in.

You also get to explore the underground caverns of Blackreach, which you may already know from Skyrim. Its towering, luminescent mushrooms, and gothic castles are both eerie and beautiful. It was terribly easy to get lost in those caves. 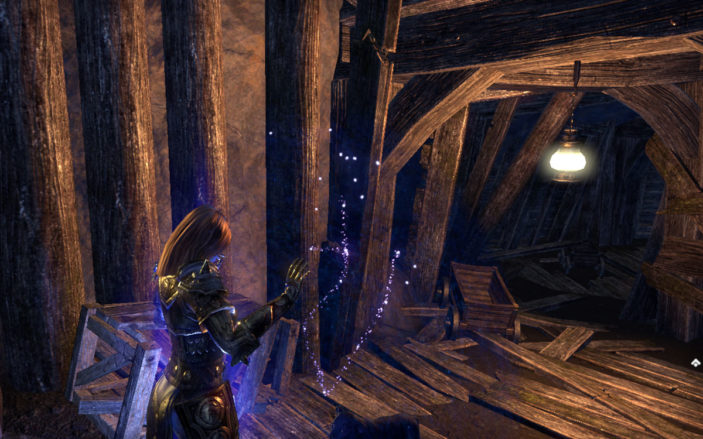 The story of Greymoor revolves around the Icereach Coven and a rogueish vampire clan, hellbent on taking over the realm. The story builds up the lore of a new in-world phenomenon — Harrowstorms. Harrowstorms are cool-looking storms that will spawn randomly across the world, similar to dragons or abyssal geysers, and are great for picking up XP. They’ll turn whichever poor NPC happens to be in the way into zombies, some even akin to Left for Dead‘s Hunter-class Infected. Those move fast.

I found it a bit of a shame that the storyline was as brief as it was. You never really see or confront the villains of this tale, either. However, I did enjoy the time I spent with my sidekicks; the half-giant Lyris Titanborn, and the ethical-vampire Fennorian – who only drinks the blood of the willing. A bit like how some of the True Blood vamps ended up being.

I just wished there was more to the expansion’s story.

Greymoor also introduces a new feature – the “Antiquities” system, with two new skill lines. It is basically the fancy ESO-way of saying archaeology (ala WoW), but it comes with a minigame! The minigame is split into two parts; the first has you narrowing down the number of dig sites available, while the second has you digging and dusting around an archaeological site to find the artefact – all done with a limited amount of stamina.

Along with the addition of Greymoor, the Vampire class’s skill lines have been…well…revamped (HA). Being a Vampire is cool, feeding animations have been updated and you’re just right in there with your character. But, this coolness came at a cost. Your skills cost more and the stronger you are, the more at risk you are as well. Again, I’ve not played ESO before so I’m not able to truly compare – which isn’t much of a shame. I can’t imagine the Vamp class being any less cool than this. 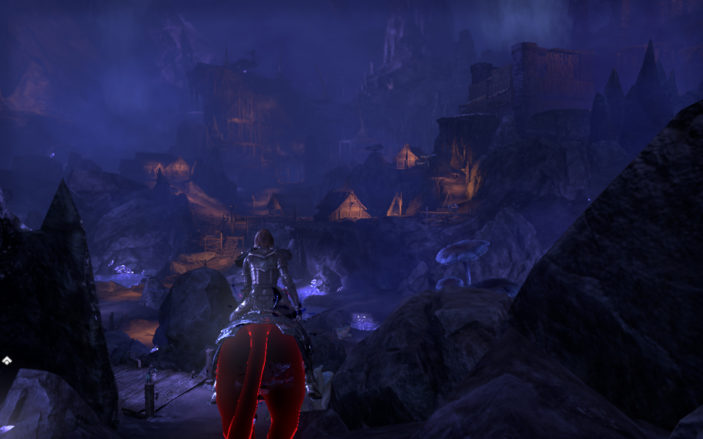 I played Greymoor on my 13-inch 2015 Macbook Pro and holy crap do the bugs make this experience extremely frustrating. I’m barely able to control where I look, despite my mouse sensitivity settings being set to zero. Everything spins. The lack of control made it hard for me to enjoy the various minigames available in-game as well, and it most certainly got me into some run-ins with Death.

Yes, I did try the fix suggested on the forum. No, it didn’t work for me.

There are some visual bugs scattered around the expansion as well as plenty of performance bugs. The ground outside the gates of Solitude isn’t as smooth as the roads beyond. Some people have noted that there is a bug where enemies will still attack you despite them having zero health, but I’ve personally not experienced this.

I don’t think that Zenimax was actually ready for the post-launch server load either. Over two weeks later, I still stutter and struggle my way through the game. Especially when I need to pass-through user-populated areas like Solitude. This server lag combined with my out-of-control mouse controls took a toll on my ol’ Mac’s fans – they ran as crazy as when I’d be exporting a YouTube video.

The Dark Heart of Skyrim…

I feel that it’s really important to note that I’m writing this review from the eyes of a complete newbie. There are plenty of outlets out there who are more familiar with The Elder Scrolls Online universe who feel that Greymoor is more of the same.

Ultimately, if you’re new to this MMORPG, I believe that you’ll enjoy your time in the TESO universe. If you’re a fan of The Elder Scrolls V: Skyrim, I think you’ll enjoy dipping your toes into this game too. Although if you’re a Mac user like me, you probably shouldn’t jump into this game just yet. I, myself, will be taking a pause until that spinning camera issue gets fixed.

Review conducted on the Mac with a retail code provided by the publisher. Check out more of our video game reviews here.