I’m in a funk with The Elder Scrolls Online — and I’m not sure how to feel. Its latest expansion, Elsweyr, brings skeletons, zombies and dragons to the fore, it’s spooky, creepy and kooky. There’s a talking, alcoholic cat, a frighteningly tall Khajit and a homeless gentleman known for wearing a pot on his head. But somehow, it doesn’t seem to go far enough.

Past expansions for Elsweyr were bright, colourful and vivacious. They had their own personality and candour, and welcomed you to worlds previously unknown. I loved Morrowind for the chance to see the iconic city reborn, and Summerset for the gorgeous new landscapes and towns that felt like they were straight out of a fairytale.

Elsweyr feels like more of the same, and that’s fine – but there weren’t any particularly jaw-dropping moments or things that felt truly ‘special’. The landscapes are largely same-ish, and the dungeons are fairly formulaic. It’s fine, but it rarely measures up. 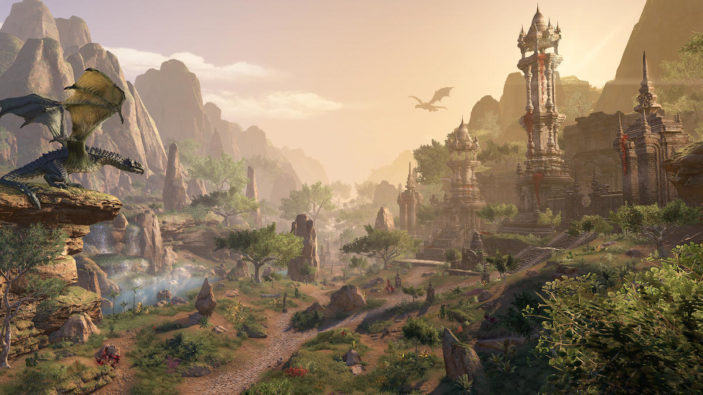 As far as additional content, Elsweyr is on the lighter side, with the new Necromancer class and roaming dragon battles being the core, standout features. Alongside this, it has the usual bits and bobs associated with DLC chapters — new furniture, bosses, additional trials and a whole bunch of new story, lore and quests. Here’s the rundown.

The Necromancer class is a solid addition to an already robust line-up of classes, and levelling brings with it a great range of skills. You can summon corpses to do your bidding, steal power from your enemies and unleash a killer ultimate ability.

My first preference in ESO has always been the Nightblade stealth class because I prefer physical attacks, but the powerset of the Necromancer is undeniably cool. It’s also pretty versatile, and you can focus on both attacking and defending with your new corpse friends.

Dragons have been introduced to The Elder Scrolls Online for the first time with Elsweyr – and they’re part of a much wider event known as the Season of the Dragon. This year long experience spans several dungeon packs, Elsweyr and an additional DLC story zone to be revealed at a later date. 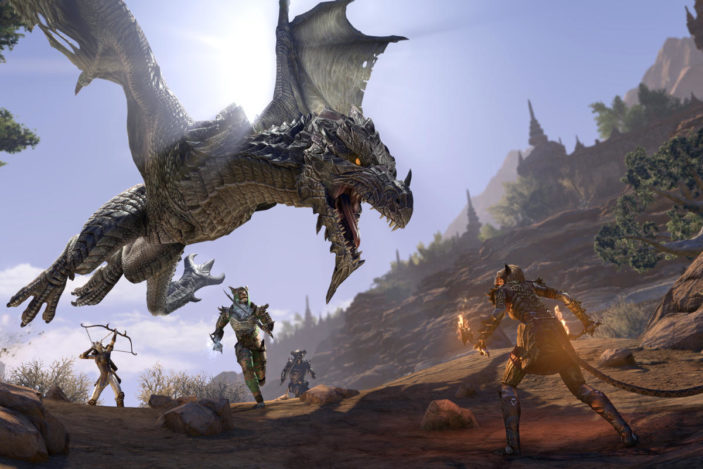 Clearly, the story of the dragons is being built up to be something bigger, better and greater – but all told, the dragons in Elsweyr are just a bit… boring. The first boss fight is spectacular, of course – and dragons are majestic and wild. But even by the second one, they just start to fade into the landscape.

Essentially, dragons roam the open world being a bit of a menace, and then they drop from the sky onto your unwilling posse. They’re tough, but ESO players are tougher, and you’ll always have a team by your side to help you take them down.

For lower-levelled players, they’ll be a bit of a bummer, with killer, high damage attacks and multiple deadly body parts in play. Thankfully, ESO players are nothing if not helpful, and when everyone teams together, taking down a dragon is fun and extremely satisfying.

Elsweyr stuffs another 30-ish hours of content into an already packed game, with a range of brand new questlines and the fire-and-death-filled main story. The main story weaves in deadly tales of dragons, death and dungeons as your player is sent across Elsweyr on a quest to thwart the necromantic uprising.

The story suffers slightly from the Elder Scrolls Online‘s tendency to be a bit of a fetch quest generator. A lot of the opening chapter takes the form of ‘go here, do this, speak to this person, speak to that person’, and for someone with hundreds of hours playing, it can get old fairly quickly. 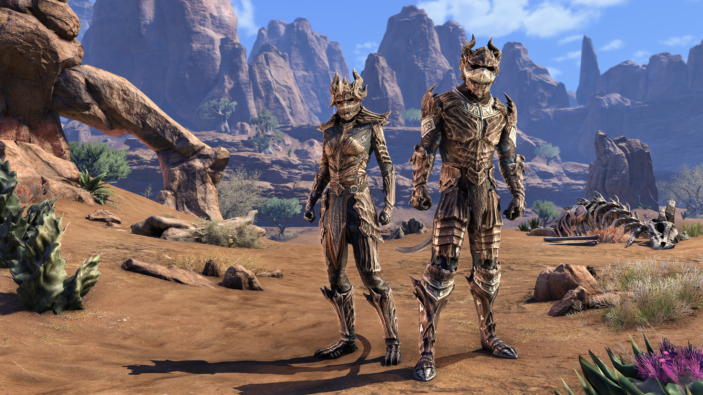 It’s wild to think that a story featuring the dead coming back to life, super-powered dragons and actual zombies could somehow be boring – and I’m still not sure that’s the word I would use – but something is missing in Elsweyr. There’s a certain magic that should be there, but isn’t.

Luckily, the story is broken up by a cast of kooky characters, fun asides and intriguing quests that make the main story a lot more exciting to get through. It’s a lot more fun playing as a necromancer, but all players will find something to love about Elsweyr – even if it’s just carving your way through the undead hordes.

Beyond the additional story, Necromancer class and dragon battles, there’s not a whole lot going on with Elsweyr. It doesn’t feel nearly as robust as past expansions, but there’s still plenty here for loyal players.

Part of my problems with Elsweyr are actually fairly simple – ESO as it stands is already a complete game. With several hundreds of hours of content, there is a phenomenal amount of stuff to do, and while each expansion might seem like icing on the cake, I’m feeling rather full.

This game was reviewed on Windows PC with a pre-release code provided by the publisher.