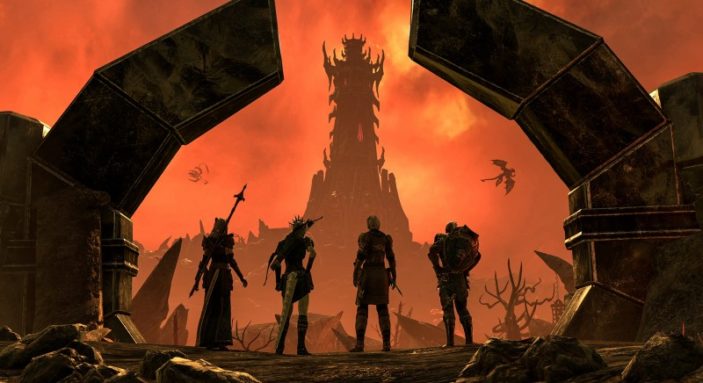 The Elder Scrolls Online: Blackwood is trying to solve to an impossible problem the game has grappled with for most of its life. Unable to fully emulate the trappings of its beloved parent series, and willing to fully embrace being its own thing, TESO has instead tried to do both. For the longest time, it has wanted to have its sweet roll and eat it too. This earned it a fairly tepid response at launch. Players complained about a story that took too long to kick off, characters that failed to engage, and gameplay that, back then, revealed a game at war with itself. With the forthcoming Blackwood expansion, TESO focuses on a similar in-world conflict, with both sides struggling to strike a balance. The difference is that, as a game, TESO has only grown more confident and clear-minded with age.

The Blackwood expansion is set some 800 years prior to the events of The Elder Scrolls IV: Oblivion. This latest chapter opens in the Imperial city of Leyawiin, a location Oblivion fans will surely remember. This urban setting gives way to the sodden Black Marsh. This gives the larger zone not just a sense of place, but also a sense of its precarious political situation. The location of both has Imperial citizens and Argonian communes brushing up against one another. They are cultures that couldn’t be more different from one another, and the relationship between them is tense. The Imperials push ever further into the reaches of what they consider to be their territory in an effort to contain the growing empire. The Argonians, displaced from their homes and forced into swampier, less desirable regions, would prefer the Imperials pissed right off. This friction forms the backbone of the narrative.

One of the ways The Elder Scrolls Online: Blackwood attempts to distinguish itself from previous arcs is with the introduction of companions. A long-requested feature from the mainline TES games, companions are AI-controlled adventurers that can accompany players on quests and through their wider adventure. The build that I played had two companions available, Bastian and Mirri, each with their own loyalty campaign. Bastian is a proud Imperial, the kind of stuffed-shirt, knight-in-waiting. His story is a tangled web of noble intrigue and truly dreary luck.

Mirri is a Dunmer (or Dark Elf) rogue who specalises in thievery. As likely to knife you as to help you, Mirri’s story is one of confused loyalties and a lust for coin. Both companions grow and change over the course of their short arc, and it’s nice to know that trust is slowly earned. RPG fans used to smooching their AI compatriots will have to cool their jets. I couldn’t detect any way of romancing the AI companions. Maybe the team can look at that down the line.

With The Elder Scrolls Online: Blackwood, TESO feels more like a mainline Elder Scrolls title than ever before. Despite being part of a larger series of expansions, this one feels significant. The new zone will recall pleasant memories for returning Oblivion players and give those less familiar somewhere interesting and new to visit. Companions offer an interesting wrinkle that is different to what other games in the MMO genre can truly offer. For Australian fans, one of the big questions remains whether ZeniMax Online Studios, now a part of Xbox Game Studios with the rest of Bethesda, can twist its new parent company’s arm into getting us some local servers.