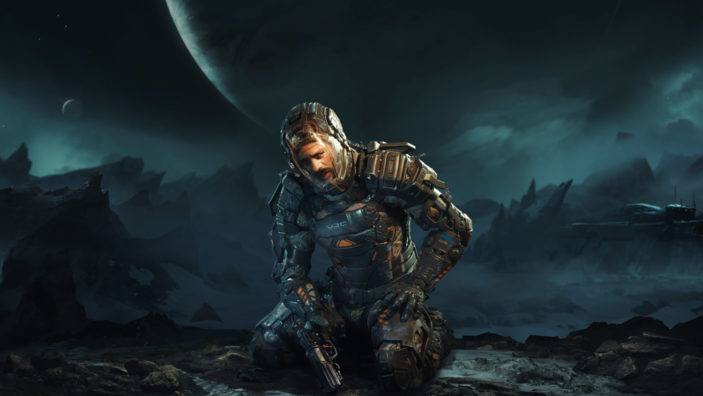 My immediate impressions of The Callisto Protocol were sceptical at best. From new developers Striking Distance Studios and video game director, designer and producer Glen Schofield, one of the minds behind the original Dead Space, I couldn’t help but feel his newest attempt at survival horror was clearly something left unfinished with his previous franchise. Given he was now able to make the next Dead Space game he truly wanted, I was admittedly expecting something too derivative, reliant on the many survival horror tropes and successes that had made it both a critical and commercial smash hit. That being said, I could not have been more surprised. The Callisto Protocol succeeds on its own merit, drawing on Dead Space, while not being confined to it. It’s definitely  gory, gruesome, scary and tense, but also tied together with an intriguing narrative and brutal combat. This is without a doubt one of the biggest surprises of the year and a must play for any survival horror fan.

The Callisto Protocol places players in the shoes of Jacob Lee, a cargo ship pilot on his way to the Jupiter moon of Callisto, which also houses the infamous Black Iron Prison. Things immediately go awry and Jacob’s ship crashes onto Callisto, where he is eventually captured by patrolling security. Awakening as a prisoner inside the walls of Black Iron Prison, Jacob must navigate through layers of cells and narrow corridors to escape the clutches of both the prison and what has become of it. The inmates and remaining staff have seemingly become infected, transforming into hideous mutated creatures which now roam the prison.

The Callisto Protocol plays things straight and narrow, as you are initially tasked with escaping the prison and nothing more. Along the way, Jacob meets some interesting supporting characters which aid him in his quest, and develop alongside him as he unveils the true origins of the situation at hand. While The Callisto Protocol feels linear at the best of times, the guided experience does enhance both the tight storytelling and breakneck pace of the narrative, which constantly drives players forward, keeping you on the edge of your seat, sweaty controller in hand. 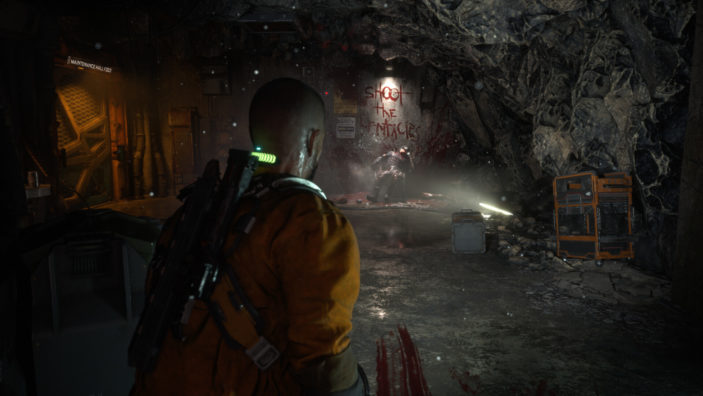 As straightforward and direct as the immediate hours of the 10-12 hour narrative are, The Callisto Protocol is not without its memorable moments. Twists and revelations will come about, and while I wouldn’t dare spoil the story, it’s worth noting that unlike Dead Space, the effects of the narrative are explored with a grander sense of morality and maturity. From the opening moments, Jacob feels integral to the story, and while we experience the world from his perspective, we too are sucked into this tale of discovery and desperation, which unfolds as drastically for Jacob as it does for us. There are some unsettling questions to address as the secrets of Black Iron Prison are slowly revealed. It’s also worth noting here that protagonist Jacob Lee is played by actor Josh Duhamel, who provides an incredible performance from beginning to end.

With the infected now roaming feely about the prison, players are granted access to both ranged and melee weapons. Melee combat is particularly gruesome, forcing Jacob to get up close and personal with his foes. Attacks are confined to the shoulder buttons, while both dodging and blocking is assigned to the left analogue stick. It feels strange at first, but is relatively easy to get the hang of as it’s not necessarily hung up on perfect timing, unless you’re looking to perform counter attacks. Gunplay feels a little more traditional, yet incredibly satisfying as you’ll get the chance to wield a range of weapons from pistols to shotguns.

Early on in the story, Jacob will also gain access to the GRP (referred to as the GRIP), a mechanical, telekinetic gauntlet while allows Jacob to pick up enemies and object alike and fling them about the environment. It too is incredibly satisfying, and feels incredibly necessary, particularly towards the latter stages of the narrative, when all methods of combat become essential for survival. The Callisto Protocol is a little heavier on the action than I had expected for a survival horror title, relying less on frequent jump scares and more so on immediate physical threats, though it rarely rids the experience of fear, more so presenting it in new and exciting ways. 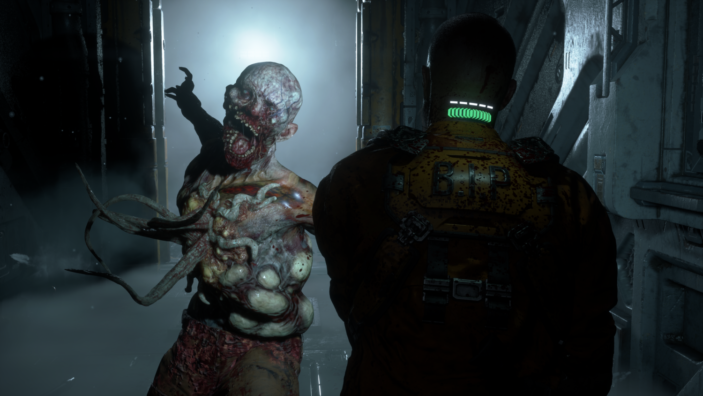 As functional and satisfying as combat is, melee combat specifically tends to get a little too chaotic when facing multiple enemies. While this is infrequent, the focused controls and mechanics seem to get confused when near more than one enemy, making it almost impossible to dodge multiple attacks from various angles. It’s times like these when I would have appreciated a dedicated dive or dodge button more so than the analogue stick mechanics.

Players can collect Callisto Credits along their journey and stop by various forging stations which allow you to upgrade both weapons and tech for added effectiveness in combat. The upgrades themselves never feel drastic, but noticeably helpful as you encounter larger waves of enemies which mutate into stronger forms. That being said, Callisto Credits can also be found and collected regularly enough to ensure that you’ll upgrade most of your gear to maximum capacity as the story draws to a close.

The World Beyond the Bars

In many ways, The Callisto Protocol also harkens back to the days of Bioshock in terms of its world building. While much of the experience is linear and somewhat guided, Jacob will stumble across audio recordings, which paint a broader picture of Black Iron Prison and the events leading to its demise. They’re admittedly not necessary, but do go a long way in providing a broader sense of both context and tension as you slowly peel back the layers of the mystery. The only gripe I have with these recordings are that the game must be paused in order for them to be played, as it would have been nice to have them play in the background as you progress. For as large as Black Iron Prison feels, The Callisto Protocol isn’t really interested on letting you roam too far off the beaten path. While it definitely services the pace of the narrative, I do question the repayable nature of the experience, given its shorter runtime. 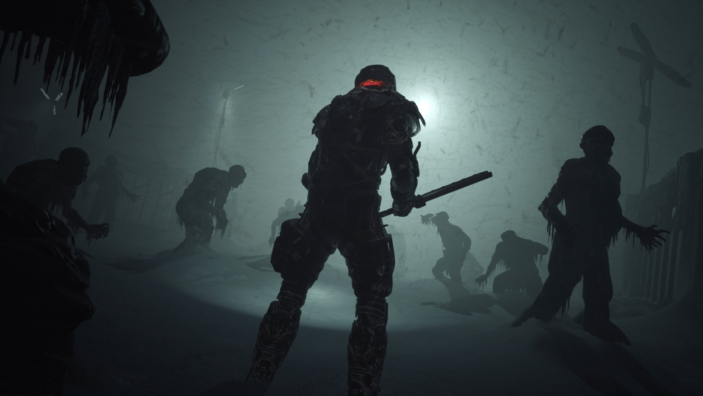 Visually, The Callisto Protocol brings the goods. The hallways of Black Iron Prison are littered with winding pipes and grates, while detailed textures make the world feel both treaded on and lived in. Impressive lighting effects also creep through tiny slits and cracks in the wall, illuminating the path ahead just enough for you to make your way through, all while leaving a special surprise around almost every corner.

Josh Duhamel’s facial and motion capture is also something to behold, as his various emotions and gestures add a visceral quality to the overall experience, on top of Josh’s already solid voice performance. The way he flinches as blood splatters over his face, or the way the various death animations cut off moments after Jacob has had his face ripped off, bring with them a level of polish and detail I never knew horror games could provide at this point in time. With a 60fps performance mode on next-gen consoles, the experience runs at a smooth clip. While I tend to prioritise the frame rate, the experience also holds a consistent 30fps, should you wish to prioritise resolution.

This might be the first game from developer Striking Distance Studios, but it certainly won’t be the last. The Callisto Protocol stands as one of the biggest surprises of the year, and what I can only hope is the beginning of the next great survival horror franchise. With an engaging narrative and brutal combat, it’s hard to argue with the results, as what began as a spiritual successor to Dead Space still rings true; this is in many ways the sum of the best parts of a former franchise. But it’s also something fiercely original and engaging enough on its own merit to warrant a playthrough from fans of the genre. You might be tasked with escaping Black Iron Prison, but we don’t blame you if you never want to leave the clutches of The Callisto Protocol.