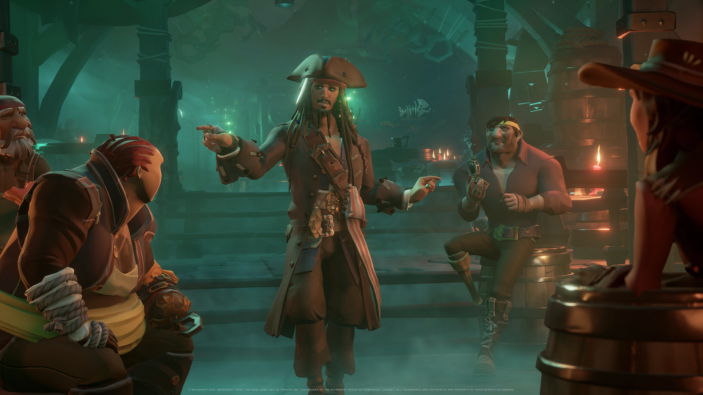 This week Sea of Thieves will launch A Pirate’s Life, one of the game’s most impactful updates ever.

The update, which launches in tandem with its Season Three content drop, is a set of five new Tall Tales all centred around Disney’s Pirates of the Caribbean franchise. Tall Tales are the Sea of Thieves version of story-driven content and are the closest it has to a campaign in any capacity. A Pirate’s Life will be the first time Sea of Thieves has embraced a complete campaign, and the first time it has worked with a media partner on content of this kind.

In Sea of Thieves, the pirate’s life is, in the philosophical sense, eternal. One never stops being a scallywag in the Sea of Thieves because that’s all there is. You live your best pirate life. You go where the wind takes you, getting into trouble, taking from the rich and giving to yourself. If you die, you wait on the Ferry of the Damned as penance. Once paid, the Ferryman will turn you loose upon the waves once more. Here, the pirate’s life is forever. According to SoT creative director Mike Chapman, that’s an attractive prospect that any Pirates of the Caribbean character would leap at.

A tavern yarn, a Tall Tale

Captain Jack Sparrow has stolen a grand treasure indeed — a golden key to all the worlds beyond the horizon. He follows his compass over the horizon and uses the key to enter the Sea of Thieves. Sparrow quickly realises that he has found himself somewhere rather desirable. Davy Jones has no say over life and death here. They are controlled by the Ferryman — a steward of pirate fate. Here, Sparrow can finally escape Jones and the terrible bargain they struck between them. He can live The Pirate’s Life, unimpeded by Jones or the Crown, forever.

Following in Sparrow’s wake, Jones isn’t having it. He holds no dominion in the Sea of Thieves, and cannot control the threads of piratey fate. Quite apart from the scoundrel Sparrow, the Ferryman is a threat. How do I assert my dominion over this strange new world? In his haste to seize power, Jones awakens the Sunken Kingdom, home to the merfolk. This kicks off an all-out war that extends from the depths to the surface. Once recruited, Sparrow himself will become an AI companion on board your ship for the duration of the adventure. He’ll be able to help you in combat, firing the cannons at hostile ships and structures.

That’s where you and your crew come in. Caught between powerful forces already in motion, you’ll have to help Sparrow evade Jones’ clutches and save the Sea of Thieves.

The Sunken Kingdom has been requested almost as long as the game has been out. An update surrounding the game’s mysterious Merfolk has been long-awaited. The Sunken Kingdom takes players to an undersea city full of tricks, angry Merfolk, and brand new foes to battle. Players will also come face to face with the Kraken that has roamed the Sea of Thieves for years.

An important point about these locations and the adventures within: they are strictly PvE (player vs. environment). Unlike the other Tall Tales in Sea of Thieves, A Pirate’s Life cannot be interrupted by other crews looking for PvP. This is something certain corners of the community have requested over and over, much to Rare’s discomfort. Indeed, on the May 13 episode of the Sea of Thieves podcast, Chapman stated baldly that Rare wasn’t interested in pursuing PvE-only content as PvP is considered a crucial component in the game’s design. Chapman would have said this knowing full well what was coming at E3 — A Pirate’s Life was first pitched to Disney in January 2020 — so he may have just been trying to throw fans off the scent.

There is a sequence early in A Pirate’s Life that has been built to mimic the actual Pirates of the Caribbean ride at Disneyland. As you move further into the adventure, actual sounds and voice clips from the beloved ride are played for players to hear. This is an important touch, and a mark of reverence not just for the Disney property, but for everyone who loves this ride. What may be harder for people from Australia to understand is that people LOVE this ride. They grow up with it. It becomes a formative part of their lives. You can buy candles online that mimic the scent of the water and other elements from the ride. We swear we are not making that up.

This nostalgia and brand recognition is one of the most crucial elements of this update. Ahead of the A Pirate’s Life update, sales of Sea of Thieves leapt on Steam. It’s been among the top 5 highest sellers since its announcement. Despite the overall decline of the Pirates film franchise over the last decade, brand recognition and love of its world remain as strong as ever.

This is why fans have been scouring the trailers Rare have released around the update looking for familiar faces and voices. Beyond Sparrow and Jones, returning characters include Tia Maria and Gibbs from the original trilogy and Scrum from Pirates of the Caribbean: On Stranger Tides and Salazar’s Revenge. Rare has said that fans should keep their eyes out for others as they play through each chapter of the adventure. As far as voices go, it doesn’t appear that Disney got Johnny Depp to reprise what may be his most famous role. It seems that duty fell to regular sound-alike, Jared Butler. Whether other actors from the series will reprise their roles remains to be seen — though Gibbs appears in the trailer, we couldn’t tell if it was original actor Kevin McNally or the character’s regular VO Steve Blum.

A Pirate’s Life brings as many as five brand new enemy types into the game. Since launch, players have really only fought skeletons of various kinds. Among the new enemies are Sirens, Phantoms, and new variations of the classic skeleton enemies. We’ve got a crab shell armoured tank enemy, there’s a skellie wrapped in electric eels that can zap you from a distance, and there’s even a clamshell headed skeleton that emits a poison cloud for damage-over-time. You’ll need to learn how to quickly cut through these foes if you stand a chance of surviving. We imagine using your sword on the electric skellie probably isn’t a good idea. You won’t want to get near the poison skellie so maybe firebombs and ranged weapons are the best bet.

Phantoms are the ghosts of pirates trapped within the Sea of the Damned. You’ll need to cut them down but beware — they explode when destroyed.

Sirens are the final new enemy, and the longest rumoured. Since Sea of Theives launched, fans have wondered with they’d see more of the merfolk. They’re clearly about. Mermaids pop up to help pirates who’ve fallen overboard return to their ships. These new Merfolk are nowhere near as friendly. These are militarised fish people, packing up-close and ranged weaponry. They swim quickly and deal significant damage when they manage to land a blow. This is combat entirely new to the game, and may take a little getting used to.

To combat these new foes is a brand new weapon. The Trident of Dark Tides is a charge-based staff weapon. Holding the fire button down will charge the staff up three times. A single charge emits a small burst of projectile energy, two charges is a medium burst, and three charges is large. The staff will drop only in the Sunken Kingdom.

What may disappoint fans to hear is that, as far as we know right now, everything we’ve described is contained solely within the five A Pirate’s Life. The way Rare has constructed the new Tall Tales gives them a number of new behind-the-curtain levers to play with that aren’t available to them in the main game. It wouldn’t surprise us to see some of these things, like enemies, in particular, make the transition to the primary Adventure mode in the future, but for now at least you’ll only find them in A Pirate’s Life.

Update 23/6/21: Following announcements in the Season Three content trailer, it turns out all of the enemies listed above will appear in Adventure mode too. A massive change for SoT and one we’re thrilled to see!

What you care about is the ships, and mine’s the nicest

While not much is known about rewards and changes for Season Three (though we may know more by the time you read this), we do know about a few Pirates of the Caribbean cosmetics coming to the Pirate Emporium. There’s a Jack Sparrow costume so you can dress your pirate to look like Jack, and an emote that captures the character’s familiar movements. The new dog pet is the classic prison hound, complete with the jailor’s keys in its mouth. Possibly the most coveted cosmetic, however, will be the Black Pearl ship set that will allow players to dress their boat to look like Sparrow’s iconic charred black galleon.

Though the A Pirate’s Life content is licensed from Disney, Rare says its intention is to keep all of it in Sea of Thieves permanently. So if you’re concerned that any purchases might be revoked if the license lapses and Rare pulls the content, don’t be. It’s all sticking around.

Bring me that horizon

All in all, A Pirate’s Life looks to be one of the greatest and most consequential updates in Sea of Thieves‘ lifetime. It brings a beloved and long-requested brand into the Sea of Thieves experience for good. It introduces new mechanics, and a new way to interface with the game. For fans who have trawled through SoT lore for years, and for those who’ve never played but are toying with getting a Game Pass subscription, this will be the perfect introduction to the true pirate life.

Sea of Thieves: A Pirate’s Life launches June 22 on Xbox Series X|S, Xbox One, and Windows PC via Steam and the Microsoft Store. You can check out the full trailer above, and find ASL and audio description versions on YouTube.