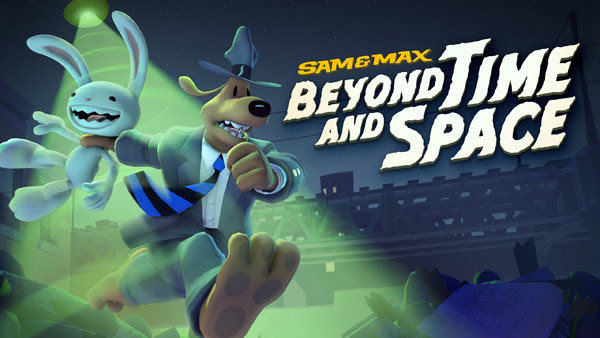 Sam and Max: Beyond Time and Space is the recent remaster of Sam and Max’s second season, originally released in 2007.  Brought back to life by Skunkape Games—a development team made up of alumni Telltale developers—who acquired the rights to the beloved 3 seasons of Sam and Max. This episodic point and click adventure game of Sam and Max’s absurd cases is truly a classic reborn. Cult followers and newer audiences alike will be introduced to the iconic antics and puzzles of the original game complete with fresh graphics, lighting and AI.

A Case to Solve

If your unfamiliar with the Sam and Max franchise, allow me to break it down. The general plot follows two vigilante private investigators, a 6-foot-tall dog named Sam and a hyperkinetic rabbit named Max, who unearth mysteries on their street in New York.  As the name suggests, Sam and Max: Beyond Time and Space is anything but your run of the mill noir detective game; instead, it grounds itself in science fiction. The pair travel through time, meet diabolical overlords in UFOs, face giant robots and become trapped in Hell. 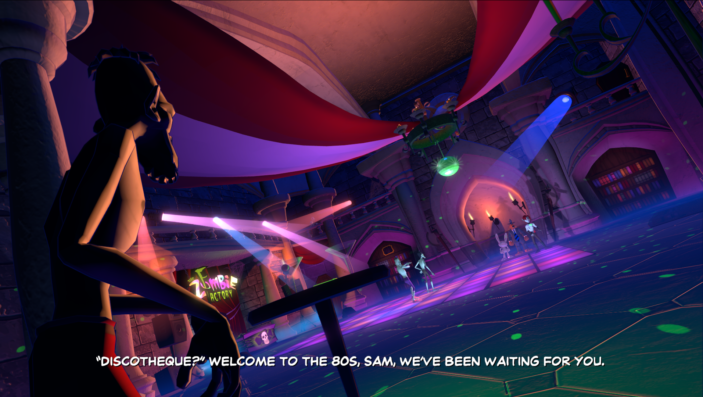 The episodic nature of Sam and Max: Beyond Time and Space means each case is wrapped up within the episode. As a result, newer players aren’t bombarded with an on-going plot from the first season, nor overwhelmed by the introduction of re-occurring characters who have served as integral parts in previous cases. The second season of Sam and Max is treated like a blank slate, all while upholding the wit, humour and quirks of the previous season. As a trade-off, the first few episodes rely on their thematic focus to propel the game before it’s able to build momentum and bridge gaps with the overarching plot. To be blunt, if you don’t like Christmas-themed media, the first episode will be challenging to complete. During my playthrough, it wasn’t until the 3rd episode, which takes place around 5 hours down the line, that I was genuinely intrigued by the cases and the foreshadowing of the plot to come. Relying on specific thematic concepts like Christmas in the first episode and Easter Island in the second means it’s going to be polarising for the players and some will lose interest and others: compelled.

The payoff for grinding through the long set-up is the masterfully curated final two episodes. All the seemingly unrelated actions and foreshadowing culminate to reveal an overarching plot that is perfectly woven together. What happens when you thwart diabolical Santa’s plan? How about when you diverge the lava from Easter Island? All is explained in the climax of the last episodes and, truthfully, in retrospect trudging through the beginning episodes no longer felt pointless. 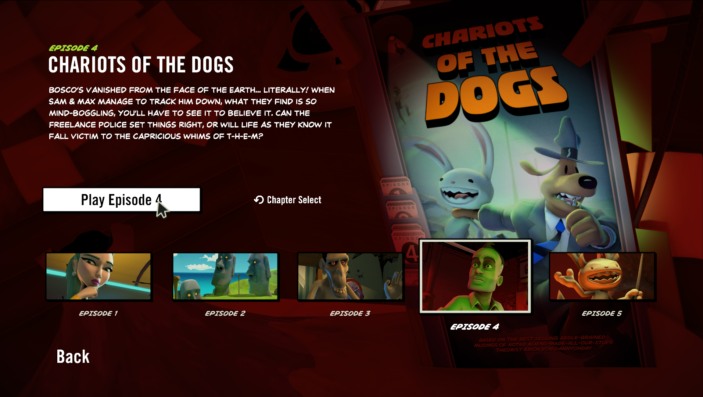 Stories of the Street

Sam and Max: Beyond Time and Space creates scenarios that are outlandish, creative and downright weird. Instead of creating simple situations with complex solutions, Skunkape Games throws players into the boiling pot of the whacky and unimaginable. At times, it can be hard to digest, but it’s also difficult to imagine Sam and Max without the chaotic and unhinged world crumbling around them. The street that makes for most of the game’s setting is filled with whacky characters and establishments. Stinky’s Diner is home to an array of uneatable food: poached eggs with tin foil, condi rice kickboxing the buddha and gooey molasses tar cake. Bosco’s Inconvenience Store is run by a conspiracy theorist and paranoia-ridden owner. A rat named Jimmy takes up residence in Sam and Max’s office and hosts fight clubs within a broken robot. And to top it all off, the street is frequently invaded by Floating Bermuda triangles portals, zombies and ghosts. The beauty of Sam and Max: Beyond Time and Space is its ability to create a world that feels lived in outside of the story its meaning to tell. 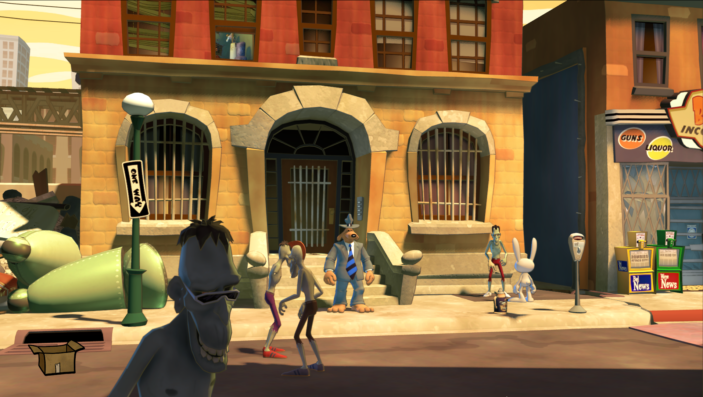 At the helm of cultivating the immersive nature of Sam and Max: Beyond Time and Space is our two protagonists: Sam and Max. The world is structured to give Sam and Max ammunition to cultivate countless hours of wit and humour. While the cast of secondary characters live out scenarios like it’s their everyday, Sam and Max lean into commenting on its absurdity through dark humour. In a way, Sam and Max: Beyond Time and Space is an example of an early metafiction game as both Sam and Max’s humour and chemistry affirms that they recognise how whacky the world is that they live in and often make jokes at its expense. Their self-aware nature is comforting for players who are overwhelmed by the scenarios, because, just like us, they have no idea what’s going on.

Maintaining the significance of two main characters in a game can be difficult without one of them being delegated to a ‘sidekick’. However, Sam and Max: Beyond Time and Space balances the characters’ importance through the nature of their humour. Sam and Max have consistent back and forth banter that ends in hilarious one-liners and slapstick humour. Often, one of them will set-up the joke while the other delivers, and the frequency in which this changes means both characters are vital to the game’s tone. Sam is the more deadpan of the duo whose humour is grounded in pointing out absurdities—and this, I believe, is the reason why we play through the game from Sam’s perspective, because that is our position as players—while Max embodies the slapstick and dark humour that appeals to an older audience. Sam and Max: Beyond Time and Space would feel incomplete without both characters, and Skunkape Games has done a fantastic job of bringing this duo back to life. 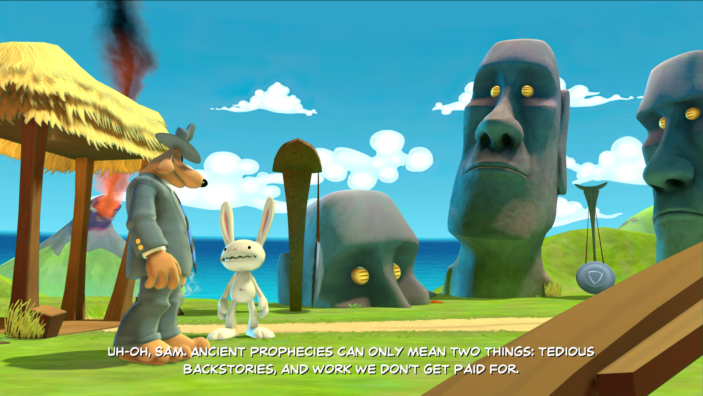 While Sam and Max: Beyond Time and Space is built around its story-rich qualities, progression is made through classic point and click styled puzzles. The gameplay loop is simple in design; you interact with the environment and characters to pick up items and information that will help you solve the mystery. However, the execution is a tad more convoluted. Due to the imaginative nature of Sam and Max: Beyond Time and Space, their puzzles are often multi-step solutions with items and events that appear unrelated. When a game isn’t grounded in reality, characters and objects often react in ways we don’t expect, which makes discerning their outcome difficult to predict. This becomes a general problem with puzzle solving in Sam and Max: Beyond Time and Space as your often left confused how certain items and events relate to one and other. I found, in my playthrough, that solving puzzles felt like a stroke of luck, because there were limited ways to logically deduce how one interaction effected another. The length in which these puzzles take to solve only heightened confusion as you’re expected to remember all the different working parts in obscure situations. Players might feel divided in this puzzle solving approach, as I imagine experienced point and click players will have no trouble discerning the puzzles, whereas newer audiences might be left frustrated with limited direction.

THREE AND A HALF OUT OF FIVE STARS

Review conducted on PC via Steam with a pre-release code provided by the publisher.

Chantelle McColl is a writer based in Melbourne, Narrm, who specialises in video games and analysing how they convey memorable narratives and experiences. Dabbling in indie genres like Platformers, Metroidvanias and all games story-rich, Chantelle is always on the lookout for the next experimental game. You can find her work on ScreenHub Australia, Byteside, Checkpoint Gaming, Explosion Network and on Twitter.