If it bleeds, we can kill iT — unless it’s a beloved IP that bleeds money, in which case we can plumb it for nostalgia value.

This has been the recent fate of the Predator franchise, which has enjoyed a recent resurgence 2018’s The Predator. Given the renewed interest, a video game tie-in makes a certain amount of sense.

Predator: Hunting Grounds is an asymmetrical multiplayer shooter in which a group of unassuming soldiers take on the titular alien hunter. While the experience is far from polished, it’s clear that developers Illfonic understand what makes the franchise so memorable. They work to build functional mechanics that sew fan service into the seams. For a Predator fan like myself, this is charming and warranted, even if it can’t carry the dryer, blander elements of this exclusively online experience.

A-Hunting We Will Go

If you’ve played developer Illfonic’s previous project Friday the 13th: The Game, you can expect an aesthetic delight. It lovingly recreates iconic aspects of the original Predator film, from environments to character models, and even mission structure.

While the experience online-only, players will find that its randomly-generated missions loosely follow the film’s plot. A fireteam of four players drops into the jungle with several tasks to complete. They might have to target enemy camps, steal or destroy resources, or even assassinate specific enemies. A fifth player controls the Predator, and they only have one job — eat these jokers alive.

Upon encountering the monster, the soldiers need to decide how to proceed — attempt to take the Predator down, or complete the mission at hand and “get to da choppah!” for evac. The feeling of undertaking a mission knowing you could be dumpstered by the Predator at any moment is incredibly stressful. Thus, sticking together becomes the best strategy for those who want the win.

This mission structure gives ever match a little narrative arc, utilising the film’s plot in interesting ways. To top it all off, the iconic handshake between Arnie’s character Dutch and Carl Weathers’ Dillon also makes an appearance, should you best the Predator in a specific way. I am sure you’ll figure out how.

Better Run Through The Jungle

The problem with letting only one player be the Predator is that everyone wants that pick. This creates uneven queue times when picking to play as  the Predator, and so most people will find it’s easier to enter a match as a soldier. This, I suspect, will make up the majority of your time in Predator: Hunting Grounds. Playing as a soldier in first-person is about as exciting as you think it is, given the Predator is the star of the show.

Gunplay is functional but feels a bit stiff at times, particularly when aiming down the sights. While you’ll take on plenty of AI enemies, none of them really give your skills a workout until you meet the Predator.

Players are equipped with two weapons, and with both health syringes and additional accessories at your disposal such as grenades, you’re well equipped to deal with human enemies

It’s not that playing as a soldier is bad. It’s more so that playing as a solider brings nothing new to the table, be it in this game or the wider gaming landscape. I can forgive Predator: Hunting Grounds for being bland at times simply because it works, and given the right situation, gunfights can feel stressful and exciting.

While the queues to play as the Predator are long, it’s worth the wait. Played in third-person, you can run across tree branches, scout the map and use your thermal vision to track down unsuspecting soldiers. Movement feels light and responsive, with parkour controls allowing you to scale trees and leap down to the ground with a single button press. It’s intuitive and easy to learn, while combat is a little harder to master.

Predators are equipped with weapons for both ranged and close-quarters combat. Melee combat is also confined to a single button press but ranged combat is encouraged. A stealthier approach is usually more effective once you make yourself known to the soliders. Dispatching enemies one by one is very satisfying, watch each solider below fire into the tree line while you are fully cloaked and out of sight. It’s an incredible power trip that never lets up, allowing you to be effective in all areas, even in death. When downed, players have the ability to detonate themselves, akin to the final scene in the film where Arnold Schwarzenegger’s character Alan “Dutch” Schaefer must avoid the blast radius as the Predator laughs on the way to meet his maker. It’s replicated here in amazing detail, with the Predator’s laugh reminiscent of the original sound bite. While this ends the match, it’s yet another way Predator: Hunting Grounds utilises iconic film moments in order to create interesting gameplay elements. 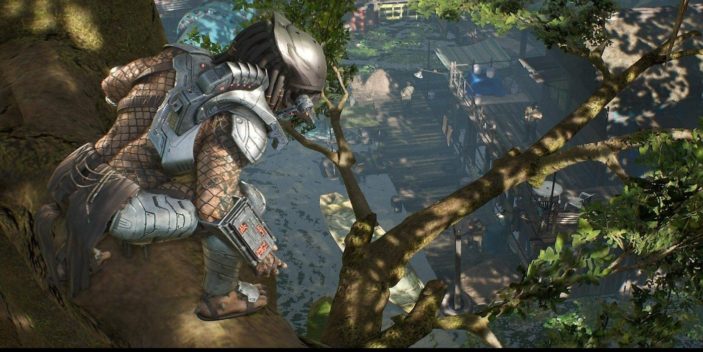 Here We Are Again

Missions are assigned at random for soldiers, which helps keep things more lively for the squad. They’re consistent for the Predator — kill everyone — but that’s perfectly fine given the character. Unfortunately, gameplay succumbs to repetition sooner than I would have liked. Hunting Grounds tries to keep things interesting with various customisation options and the (deep sigh) unlocking of loot boxes. The good news is that the loot boxes yield only cosmetic items, and are thankfully free from any micro-transactions. They can be purchased with currency acquired in-game, which is also dished out to players at a generous rate at the conclusion of each match.

Customisation is deep enough for a game of this kind, with options to change appearance, weaponry and perks. Each of these items are unlocked via either loot boxes or in-game progression which encourages the grind, but doesn’t really give you enough to sink your teeth into until around Level 10. Soldier upgrades are unfortunately rather mundane, from generic assault rifles and shotguns, to perks that increase health, stamina and damage. Classes can be selected to alter these traits even further. Class selection seems to have a greater effect on Predators, with classes like Scout allowing for greater movement at the cost of decreased survivability. The Berserker class encourages melee combat and grants a larger health pool. Each class is unique enough to warrant a try, but the thing is: the Predator is so overpowered by design that you could get away with using the standard Hunter class, with its balanced spread of all traits, and still get a feel for everything. I can appreciate everything Predator: Hunting Grounds is trying to do, but apart from the numerous elements inspired by the film, the core gameplay experience is functional but ultimately a bit tired. 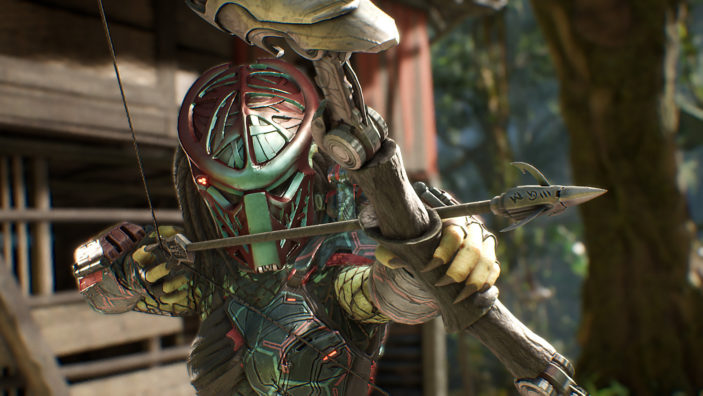 Overall, Predator: Hunting Grounds proves to be adequate fun in the right situation. Final battles between soldiers and the Predator are incredibly stressful, and while gunplay is functional, playing as the Predator is definitely the highlight of the experience. Customisation adds variety, but as missions are randomly selected and similar in structure, repetition soon becomes an issue. Predator: Hunting Grounds is at its best when it’s mimicking the original film’s most iconic moments, but as they’re few and far between, you’re left with an average shooter set in a nameless jungle. Whether escaping the Predator, or this game after a few hours, you’re going to want to “get to da choppah!” .