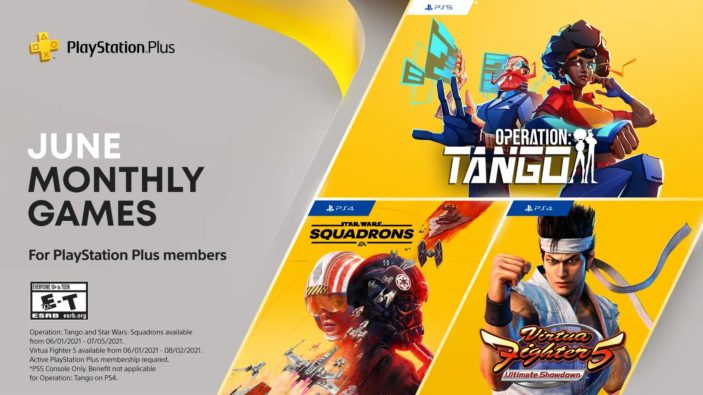 Star Wars Squadrons, Virtua Fighter 5 and Operation: Tango are your free PlayStation Plus titles for June 2021.

There are a few particulars involved here so let’s walk you through them.

Operation: Tango is a co-op, online spy game where two players work together to complete dangerous missions in a high-tech world. The version available on PlayStation Plus is for PS5 only so, regrettably, PS4 owners won’t be able to grab this one. Also non-negotiable: both players will need access to a working microphone to properly play the game. You’ll be able to grab Operation: Tango until July 5, 2021.

Virtua Fighter 5 Ultimate Showdown was only announced for PS4 a few days ago. Now, it’s free on PlayStation Plus. The legendary Sega fighter has been remade by Ryu Go Gotoku Studio, the legendary studio behind the Yakuza and Judgment franchises. Online has been reworked, custom 16 player tourneys are on the cards, and classic modes like Rank Match, Arcade, and the beloved Training mode return. This one’s a PS4 title, but can be played on PS5 via backwards compatibility. Virtua Fighter 5 Ultimate Showdown will be available until August 2, 2021.

Star Wars Squadrons only launched last year but has quickly amassed an audience of devoted fans. A throwback to the classic Star Wars flight sim games of the 90’s, Star Wars Squadrons puts the player in the cockpit of the series most famous starfighters. Following the Battle of Endor, the campaign is split between the nascent New Republic and the crumbling Imperial Remnant. From X-Wings to TIE’s, you’re in the cockpit and in control. This one’s another PS4 title but can be played on PS5 via backwards compatibility. Bonus feature #1: If you have a PlayStation VR setup at home, Star Wars Squadrons has a VR mode! Bonus feature #2: Melbourne’s own EA Firemonkeys contributed to development on the game! Australians in Star Wars! This game rules and you should play it. Star Wars Squadrons will be available on PlayStation Plus until July 5, 2021.

All you need to access these titles is an active PlayStation Plus subscription. They’re yours to keep as long as your subscription remains active.

May’s PS+ titles — Battlefield V, Stranded Deep, and Wreckfest — will all remain available until Monday, May 31, 2021, so grab them while they last.

You can find out more about these games over on the official PlayStation Blog.