Pikmin 3 is an excellent game. An exceptional one even; perhaps the best possible expression of the cutsey, puzzle-strategy since the first one was released in 2001. Any Nintendo owner worth their salt scrambled for a copy when the original Pikmin 3 when it was released for the Wii U in 2013, and hold fond memories of lazy Koppaites bossing swarms of mouthless, sprout-like, colour-coded Pikmin around so they can survive on fruit.

But even though Pikmin 3 was an essential purchase for Wii U owners, the Wii U itself wasn’t an essential purchase for Nintendo lovers. Sure, it had some great games, but the clunky system felt like – and still feels like – a lull between the mega success of the Wii and the current Switch. That means Pikmin 3 is still considered a relatively obscure game, which makes the value-driven “Deluxe” version so brilliant. It revives one of the best games on the Wii U for a new generation so everyone has a chance to fall in love with this series. And with a wider audience, comes a wider pool of content to really make this the definitive version for people who never got into Pikmin. It also sets things up nicely for the long-rumoured Pikmin 4, which is looking more likely now that this revival is here.

Deluxe offers the original, roughly 10 hour story mode from the original, but adds in a stack of extra content like new difficulty options (tempting those who’ve already played it to come back for more), a co-op mode, and 14 prologue levels. Although the latter is a relatively lazy inclusion, and feels like a missed opportunity given the additional story is nowhere near the same level of ingenuity and fun as the primary story mode. 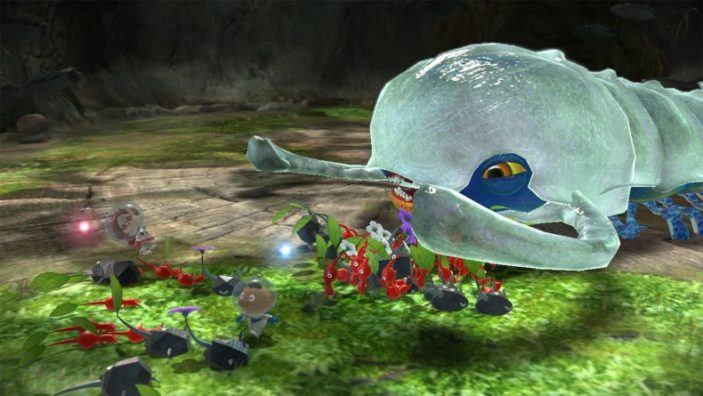 You control a handful of space scavengers searching for fruit on an alien planet simply for the purpose of finding more food to take home. Greedy, lazy, and utterly helpless in this context. Still, you manage to befriend the planet’s native Pikmin creatures, who are more helpful than they need to be, and more subservient than you deserve. The goal is to collect enough fruit juice to stay alive, and have the Pikmin help repair your ship.

Much like Lemmings and other similar puzzlers, there are different types of Pikmin best suited for many different actions and situations, giving you enough variety to experiment with as you navigate some genuinely fantastic and brilliantly conceived puzzles – one’s that are both accessible and challenging for all ages. You can summon up to 100 Pikmin, either launching them through puzzles and watching them diligently get the job done like an army of worker ants, or lobbing them at the various bosses that pop up across the planet.

Flame-resistant Pikmin, ones that can conduct electricity, flying Pikmin, swimming Pikmin – all these types have to be used in concert as a function of increasingly complex and intelligent level design. It’s then a shame that the extra content, tracking the story of the protagonists from the first two games, just aren’t as substantial or meaningful when it comes to stage design. Rather, it’s extra content for the sake of it, mainly combat-focused extras in the same maps as in some of the main story missions. They are great simply because, by that point, anyone would be addicted to throwing Pikmin around and watching them work. It’s just disappointing that more effort wasn’t afforded given the long lapse between the original Pikmin 3 and this version.

Perhaps the most meaningful change here has to more to do with the hardware of the Nintendo Switch, and the huge difference it has from the Wii U. The original Pikmin 3 made full use of the Wii U controller’s second screen by displaying a map, affording you the pre-emptive strategy of planning routes and adding a substantial heft to your daily planning. Now, the map is just a pull-up over the main gameplay, which makes the functionality feel a bit more bloated and less compartmentalised. That’s still no huge deal, since it just requires more juggling during the game. But it does take away much of the uniqueness that made the original so beloved. 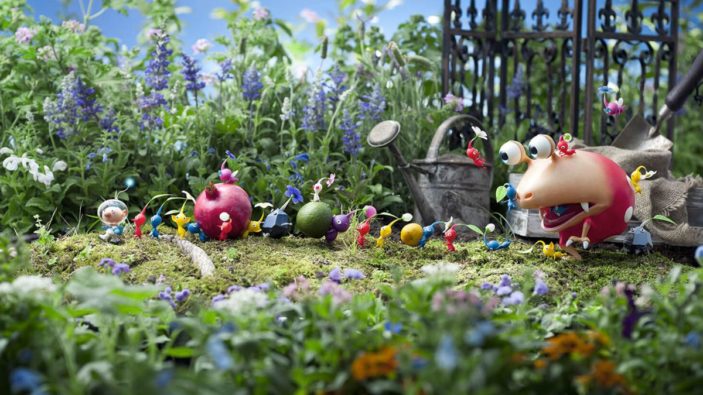 A few other gameplay changes has made it a bit easier to work with the Pikmins overall. Getting a Pikmin to charge, for example, won’t be a general command to all Pikmins, but rather those of the selected colour and function. Seemingly small changes like this just make the core of the gameplay flow better, and those picking the title up for the first time won’t be privy to the mild frustrations that came with the original.

There were few ways a Deluxe version of Pikmin 3 could disappoint. It’s still one of the Wii U’s best games, and a series highpoint that perfectly encapsulated what makes this simple concept one of the most endearing, yet vastly overlooked, franchises on Nintendo. For those who haven’t played the original Pikmin 3 – like most good re-bundles, this is the best possible way for you to catch up on all the fun and cuteness. For those who have played Pikmin 3 before, it’s time for a re-visit for what was undoubtedly one of your favourite gaming moments of that year.

Plus, for those who have played it before, Pikmin 3 now introduces an “Ultra Spicy” difficulty which cuts usable Pikmin from 100 to 60. It may not seem like much of a change, but it adds more than a few layers of complexity to the main story and should easily tempt those who aren’t already sold on re-visiting this gem.

Review based on retail code supplied by Nintendo.