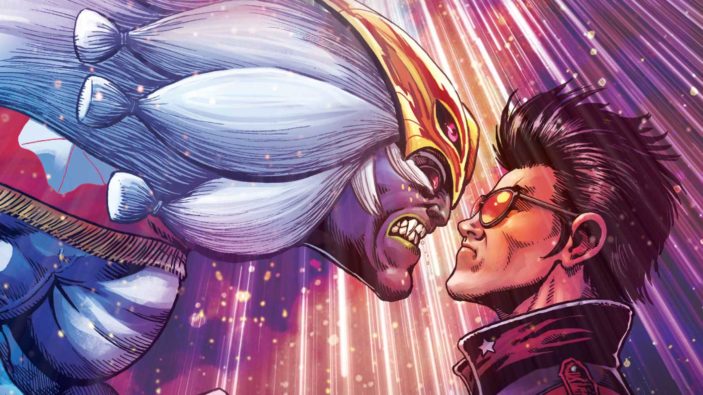 Since the original, No More Heroes has provided its fans with competent combat, expressive visuals and a consistent sense of humour that allows characters with names like Travis Touchdown to remain memorable and relevant. It is with No More Heroes 3 that Travis returns to a world of intergalactic assassins, fourth-wall-breaking jokes and a combat system that’s as addictive as it is functional. No More Heroes 3 is arguably as good as the series has ever been, rolling over many of the mechanics, humour and overall feel that has made the series so successful. Though a blast to play, No More Heroes 3 is plagued with technical issues that hamper an otherwise fun, over-the-top romp.

Exactly as crazy as you think it is

The premise of No More Heroes 3 is a crazy as it sounds. The story begins 10 years before the events of the original NMH. A young Damon Ricotello rescues an extraterrestrial named FU, whom he helps escape Earth and return to his home planet. Aside from the obvious nod to the plot of E.T., FU promises Damon that he’ll return in a couple of decades. Twenty years later, Travis Touchdown has returned to the city of Santa Destroy after a notable absence. Unfortunately, he’s returned to find FU’s promise threatening Earth’s freedom. Naturally, Travis is chosen to enter a competition of epic proportions and partake in an intergalactic tournament to climb the rankings and take down each of FU’S nine assassins in order to save the planet. It’s admittedly strange that No More Heroes 3 bears an incredibly unique premise, even though it mimics the overall structure and pacing of previous iterations, with ranked battles against various deadly assassins. 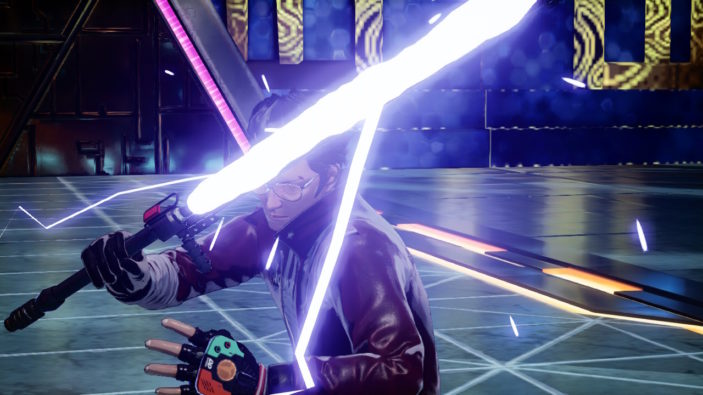 As a result, No More Heroes 3 sees Travis traversing the multiple mini-hubs of Santa Destroy on his futuristic Akira-inspired motorcycle, the Demzamtiger, doing all that you can to raise the funds to enter each intergalactic battle and move up the tournament ladder. Aside from the core battles, Travis can earn UtopiCoins by completing various odd jobs in town, including mowing lawns and unblocking toilets. These tasks are no more than glorified mini-games, but provide enough variety throughout the experience, while never overstaying their welcome.

Core battles consist of enemy waves and mini-bosses, a minimum number of which must be completed in order to qualify for a boss battle in the first place. This structure is admittedly linear, which keeps the pacing fast and consistent, but given its 15-hour narrative, it does start to drag, particularly towards the end of the experience. Thankfully, and without going into spoilers, some of the latter galactic assassin battles provide truly epic moments. 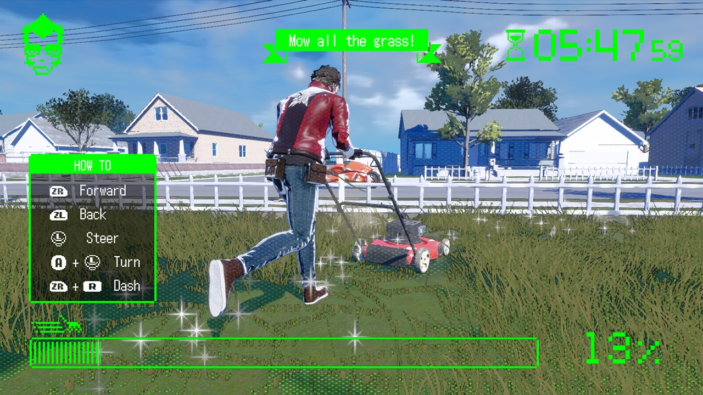 In addition to the linear narrative, No More Heroes 3 excels in its overall presentation from the charming anime opening sequence to the way each overarching encounter acts as its own Netflix style episode, complete a title sequence and ending credits. The next episode even counts you in, as if your streaming service is set to play the next episode automatically. Beating each boss even shifts Travis upwards on a traditional arcade-style ladder. It’s incredibly charming to see this dedication to breaking the fourth wall, and even though one would argue it’s all been done before, it still left me with a big dumb grin on my face.

Players will spend most of their time hacking and slashing enemies with Travis’ iconic Beam Katana. With a combination of light and heavy attacks, you’ll block, dodge and slash your way through a wide range of alien enemies, each with different attack styles and abilities. The combat is admittedly as good as it’s ever been, with previous iterations presenting combat as its strongest pillar. Frequenting challenges in order to acquire the adequate funds to enter a boss battle is exhilarating thanks to a smooth blend of variety and difficulty. Travis will not only need to use his Beam Katana but the Death Glove, featuring a set range of powerful attacks, from a storm of projectiles, to slowing enemies down to a crawl and leaving them vulnerable to a flurry of attacks.

Travis will also need to charge his Beam Katana after a certain number of attacks, by either shaking the right joy-con or holding the R bumper and wiggling the right stick about. This mechanic adds a surprising amount of tension to each battle, as you must find the time to temporarily escape the mayhem and shake the hell out of your sword. Yes, I am aware of how that sounds. Certain battles will also allow Travis to initiate his ‘Full Armour’ mode, which drastically changes the tone and mechanics of each battle, as Travis must now zip around a zero-gravity arena in a Gundam suit. Yes, I am aware of how that sounds too, but trust me, it’s awesome. 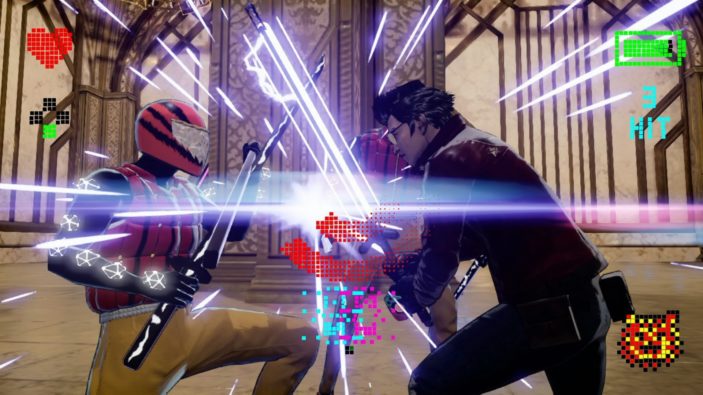 The fact that any two battles are rarely the same allows you to interact with both your skills and abilities in new and exciting ways, allowing the combat to feel consistently fresh. The boss battles however are a real treat. These large arena-style matches are prefaced with small story beats, progressing the narrative in ways that give context to each fight. The humorous conversations between Travis and each of these bosses are hilarious to say the least, as the writing team truly understand Travis and his absurd place within the story. The amount of mayhem and destruction that surrounds Travis throughout his journey is one that continuously encourages you to push the pedal to the metal and give into its insanity.

Unfortunately, No More Heroes 3 is at its weakest when you’re out on the open road, cruising at max speed across each hub, as the frame rate drops to around 10-15 frames per second. I can forgive slight drops in combat as these are minor, at around 20-25 frames, but considering an adequate amount of time is spent travelling between these small hubs, it’s a shame it occurs so frequently. Muddy textures, pop-in and shallow draw distances are more noticeable in handheld mode, but I can understand this may partly be due to the dip in overall resolution. It’s a shame that No More Heroes 3 performs this way, simply because there’s so much to show off. So many eye-popping colours and flashy visuals draw the eye and therefore highlight the consistent graphical hitches. 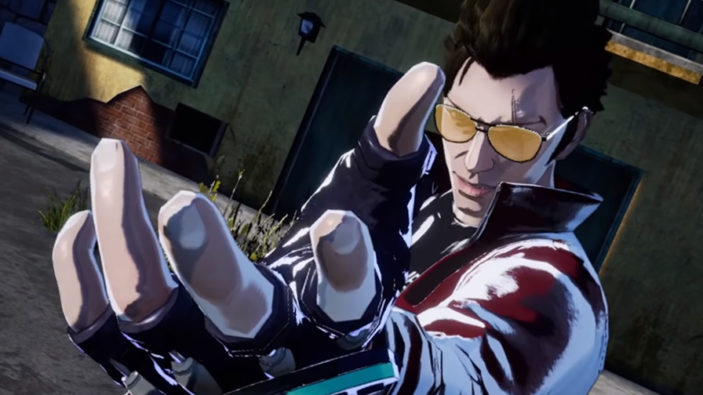 Overall, No More Heroes 3 is an engaging, if slightly overcooked hack-and-slash romp. With impressive combat mechanics, unique art style, charming presentation and clever humour, I would be hard-pressed to find a fan that would choose to pass this up. But it’s hard to compliment the game on these fronts without mentioning the glaring technical issues that persist throughout the experience. Muddy textures, pop-ins and abysmal frame rate drops keep this from being a true winner. But if you can look past these shortcomings, Travis Touchdown is back with a vengeance baby. And he prefers his Beam Katanas shaken, not stirred.