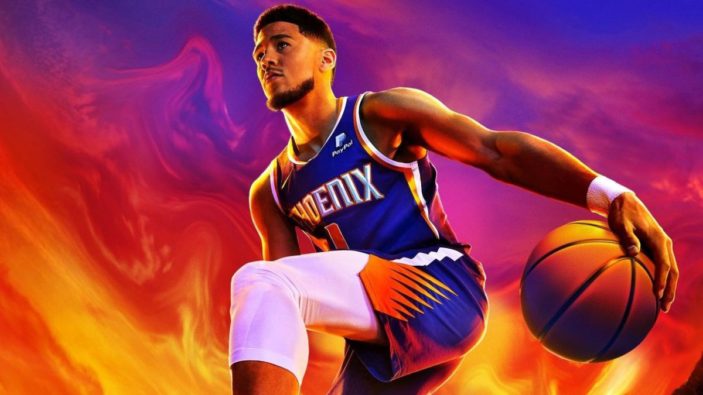 That time of the year has rolled around again, where we begin to look forward to the nearing NBA season, discussing many of the bigger trades and looming deals around the league. Along with that however, comes the launch of the latest NBA 2K, allowing us to live out our potential virtual careers as NBA superstars. With NBA 2K23, all of our favourite modes, teams and players have returned for the ride, with a certain new mode highlighting the defining moments of the G.O.A.T, His Airness himself, Michael Jordan. NBA 2K23 still manages to emulate the game of basketball in fascinating ways, improving on many of the smaller gameplay nit-picks players may have had last year. However, many of the remaining modes like MyTEAM and MyCAREER, while robust, have now been set in their ways, presenting a much tougher, elongated challenge for those who refuse to shell out the extra Virtual Currency. Before we proceed, it’s worth noting we are reviewing the next-generation version of NBA 2K23 on the PlayStation 5.

Along with every NBA 2K entry, there are more often than not, improvements to general gameplay. Time spent on the court was largely satisfying, with developer Visual Concepts improving not on the engine that lies beneath, but refining the smaller yet important details that add to the realism, feel and flow of the game. Players once again feel weightier, pounding the ball and the court with force, while blocked shots now fly out of bounds and bounce off the backboard with intent and tenacity, as opposed to the rather accidental and underwhelming deflections that would occur in previous games. The ring now reacts to your shots, flexing under the weight of a lofty floater as players scramble and box out for the coveted rebound. 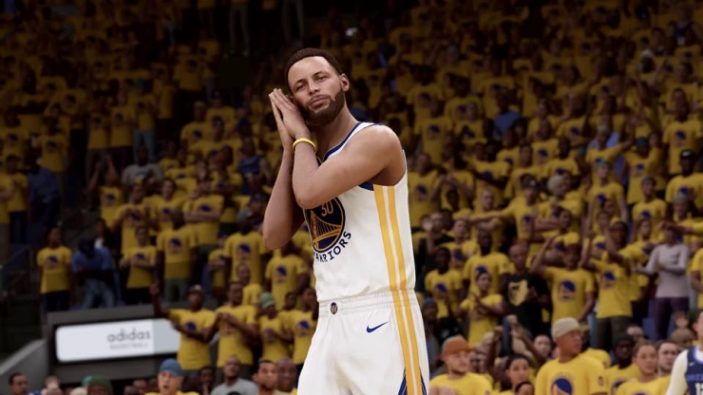 The pro stick has also been revamped, adding in a slew of new animations and dribble moves. Flicking the stick back and forth can also cater for newer moves like double throws and switchbacks, which can be used to deceive and throw players off the beaten track. Attacking the rim also feels a lot smoother and responsive thanks to these additions, allowing for a finer sense of control at multiple points on the way to the rim. The new pro stick also allows you to flex on the rim, holding the stick in certain directions along with well-timed skill dunks for the ultimate bragging rights. These adjustments rarely redefine the solid gameplay mechanics featured in previous NBA 2K entries, but subtly nudge the gameplay forward with a sense of progression and purpose.

Before heading over to NBA 2K23’s returning modes, we must touch on a newer, very specific tribute to a certain player; a mode that hasn’t featured in an NBA 2K game since NBA 2K11. The Jordan Challenge is indeed a highlight of this year’s package and true testament to the greatest basketball player to ever put a basketball through nylon. I’m a die-hard Boston Celtics fan, but I’m happy to give credit where it’s due. Too often do I find myself side-tracked on YouTube watching Jordan highlights as if I’m witnessing them for the first time. The mode itself is comprised of 15 unique game experiences from Jordan’s early University of North Carolina days to what is otherwise known as ‘The Last Shot’. Each challenge is paired with three objectives, each worth a star. Stars can be obtained by completing these objectives within each game to unlock excusive Jordan-themed MyTEAM and MyCAREER rewards. 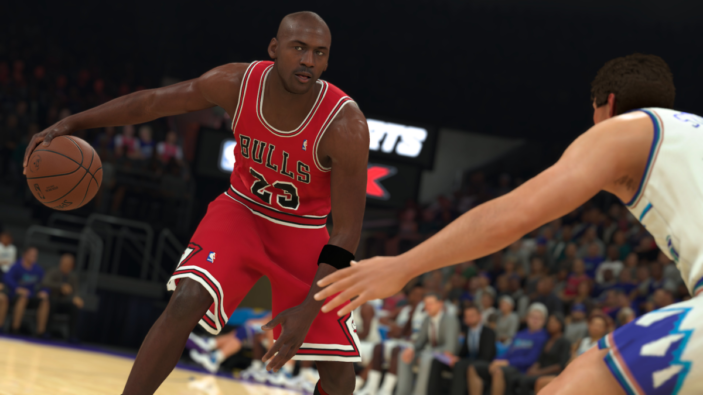 There’s something special and admittedly overpowered about exploding for 63 points against my beloved Celtics or taking some of Jordan’s most iconic shots with a picture-perfect in-game recreation. But I need to get some things out of the way. The newer Jordan Challenge has clearly been inspired by WWE 2K23’s Showcase Mode highlighting the career of wrestler Rey Mysterio. That mode was admittedly fantastic in its own right, but made the effort to make tings feel more like a documentary, laced with real footage of each match, which would naturally transition as you completed certain moves. In the Jordan Challenge, each challenge features a pre-game interview with some of the game’s greatest legends, singing Jordan’s praises as they suited up to go toe-to-toe. But beyond this, that’s really it. No real in-game footage, no post-game interviews ripped straight from the broadcast. It’s all a little disappointing given the related documentary series The Last Dance was so fluid and robust. That being said, each game laid out what was otherwise an exciting and satisfying romp which dares players to soar above the skies and elevate the game to a place where nobody else had taken it at the point in time; expecting a level of domination that only His Airness could demand.

Remaining modes like MyCAREER and the return of The City also feel like they have taken minor yet deliberate steps forward to present players with a smoother and more direct experience. The City is arguably as expansive as it has ever been, treating next-generation gamers with distinctly designed burrows for a unique sense of variety, and a new fast-travel subway system that makes navigating The City a breeze, complete with super short loading times. Unfortunately, the skateboard still sucks when it comes to getting about town. It’s incredibly clunky and never reacts quite when you need it to. However, The City’s tightly woven relationship to the MyCAREER mode keeps things fresh as your objectives do a great job at encouraging you to navigate all corners of the environment, compete against neighbouring players and pave your way to superstardom. It’s hard to argue with the structure presented here given the once again small and deliberate improvements.

The MyCAREER mode is also now super streamlined, doing away with the somewhat tedious college career that consistently sees you competing as a star only to have you knocked back into a bench role, playing for a team you otherwise never considered. Here, your player will dive right into a team of their choosing to immediately compete for minutes out on the court. As a result, the earlier hours of your career bring with them a faster sense of progression and purpose, trimming off most of the fat we’ve admittedly grown tired of these past few years. The mode also throws you into a rivalry with fictional player Shep Owens, which fuels most of the narrative, even if it lingers in the background for most of the opening hours. 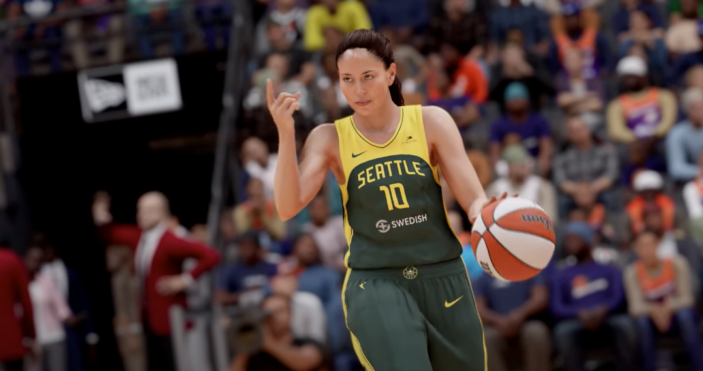 The MyNBA mode returns once again, but this time with the inclusion of MyNBA Eras, essentially allowing you to run and craft certain ears of the league as you see fit, from the physically charged Magic and Bird era of the 80’s to Jordan era of the 90’s, to the more recent LeBron dynasty. The mode has always presented a wealth of depth, versatility and variety, with the new MyNBA Eras portion adding a sense of authenticity through classic courts, CRT TV filters and old-school scoreboards, as they are presented in The Jordan Challenge. It’s honestly the time machine NBA 2K fans have been waiting for. It’s also a great way to take in the visual flare on display. NBA 2K23 looks fantastic and runs well, even if a few lesser known players could do with a few more face scans. Besides this, many players will find that the MyGM and returning WNBA modes, as robust as they are, remain largely untouched.

Finally, MyTEAM mode returns with the same solid gameplay loop and that many would have come to expect at this point ion time, now with the added seasons that alter the cards and unlockable players on offer depending on the season’s theme. But my overall verdict remains the same. This mode will never likely please those content on spending no more than they need to in order to progress. Virtual Currency and MyCAREER aside, the ability to grind for and obtain certain player cards and rewards is greatly skewed towards those who are willing to pay for it, cutting down on playtime significant while giving said players the upper hand. Given the solid gameplay mechanics on display here, it’s hard to discourage anyone from diving into the MyTEAM mode, but I can’t imagine the causal fans sticking around for long once they understanding exactly what’s required of them in order to dominate.

Overall, NBA 2K23 is nothing short of a solid step forward for the franchise, ironing out many of the nit-picks payers may have had with NBA 2K22. The Jordan Challenge is a true highlight, while the MyNBA Eras portion adds a while new layer to an already deep chapter of NBA 2K23’s young existence. The MyCAREER mode is more direct and accessible than it’s been in years, while the fast-travel subway is a true blessing for those constantly living and balling out in the expansive City. The MyTEAM mode is definitely set in its ways, but is sure to draw some of the more hardcore players in the long run. If you’re an NBA fan of any sort, NBA 2K23 is hard to argue with.