NBA 2K22 couldn’t have arrived at a better time.

It’s been a rough couple of seasons for the NBA. A global pandemic, postponed games, bubble playoffs, shortened seasons and play-in tournaments have charted a new future for the sport. The lone beacon of consistency: that the NBA 2K franchise will smash out its annual instalment, for which I’m sure basketball fans will be grateful. While NBA 2K21 provided minimal changes in its next-generation bow — new shooting mechanics, The City replacing The Neighbourhood — it’s fair to say that NBA 2K22  is more interested in change. This is an incredibly solid iteration that addresses many of the most notable flaws in the 2020 experience. It’s far from a design revolution but, given the lack of market competition, it remains the greatest basketball sim money can buy.

Everybody Get Up, It’s Time to Slam Now

As mentioned, NBA 2K22 has devoted much of its development to address last year’s more notable flaws. The result is a game that feels familiar, yet fresh in all the right ways. The NBA 2K series has always excelled at creating the most in-depth basketball sim on and off the court. Most of your time spent hooping feels satisfying, refined and, crucially, fun. The most notable changes this year include added animations to both offence and defence. Models now move more smoothly and feel less janky, especially when making physical contact with other players. The weight of impact is still there, but players now brush against and past each other more believably. Too often have I been caught up in an opponent’s leg when crossing them up, ruining my flow in the process. No more. A godsend.

Offensively, the most notable change involves both the stamina bar and shot stick, which now work hand in hand. I’m sure many fans will hear this and rejoice. Developer Visual Concepts has decided to bring back the traditional shot stick. The divisive ‘Pro Stick’ is dead at last. Shooting is as you remember it, although now players must release the ball within a specific window towards the top of the metre. Your stamina bar will immediately reflect the size of your release window. Messing around too much at the top of the key will drain stamina, so make sure to pick your moves and pull up accordingly for the best chance. This window can also widen and shrink based on shot selection and choice of shooter. While an open Steph Curry will drain that three, we still wouldn’t recommend putting one up with Shaq. Ever. With that in mind, and given these two aspects are so closely linked, team basketball is heavily encouraged in order to share the load. This is particularly important in the later minutes of a game where fatigued players may need to be subbed back in. 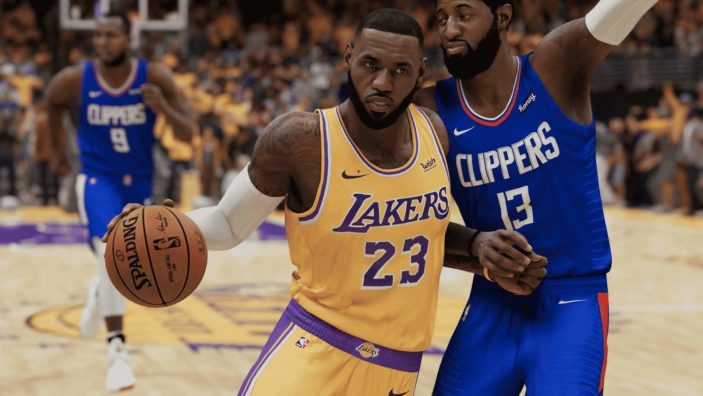 This decision to return to traditional a traditional shooting system also allows for a greater level of detail and accuracy while utilising dribble moves. Too often in NBA 2K21 did I activate the ‘Pro Stick’ accidentally, only to throw up an incredibly unbalanced airball. It’s also worth noting that alley-oops now require timed button presses to be completed. Throwing up the lob can be easy enough, but the finishing player must press the ‘shoot’ button once in the green area of the timing metre to slam one down. While I don’t feel this is necessary, I can appreciate the fact that everything requires a certain level of finesse and skill, even if they’re not incredibly challenging during moment to moment gameplay.

Defensively, NBA 2K22’s biggest improvement comes in the way of a redeveloped shot blocking system. I always felt that blocking in previous NBA 2K titles felt lifeless and ultimately subject to chance. Thanks to new animations and a smoother sense of flow and physicality, blocks now feel accurate and powerful, lending some much needed toughness to the game’s great centres, that I believe have never been truly represented as a threat in the past. Play with Wilt Chamberlain’s Lakers or Bill Russell’s Celtics and you’ll see what I’m talking about. This added sense of accuracy and realism also extends to mid-air confrontations, as players under the ring feel more organic in motion. Highlight reels in previous games were frequently tarnished or straight up ruined by wonky animations that left my big men looking like frozen robots stuck in thin air. In NBA 2K22, players reach, swat and guard in a way that simply feels more organic and therefore effective in the majority of defensive plays and situations.

We Got a Real Jam Goin’ Down

NBA 2K22’s modes remain largely unchanged from last year, which isn’t such a bad thing as many of those modes were new to NBA 2K21’s next-generation versions. Along with MyCareer, MyTeam and MyNBA modes, The W returns, featuring a standalone career mode based around the WNBA. In terms of the traditional MyCareer, players will be glad to know that both MyCareer and MyPark/Neighbourhood modes have now been fused into one single MyCareer mode, featuring an expanded version of last year’s City. While The City is essentially a larger and more detailed Neighbourhood, is is brimming with places to go and things to do. This year’s inclusion of four factions to choose from and play with and against is a nice touch but never goes further than the initial choice to pick one in the first place, leaving the MyPark/Neighbourhood mode itself largely unchanged. The new MyCareer mode remains the largest update to NBA 2K22, as your player, known as MP (which believe it or not, stands for ‘My Player’) builds an NBA career and brand empire. 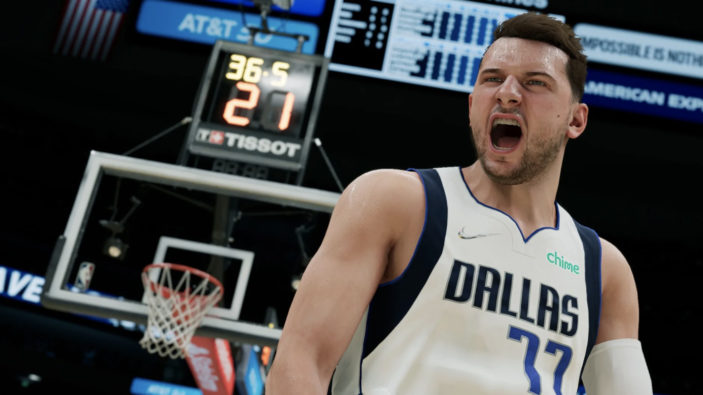 The career itself is relatively streamlined, but it’s the overall detail and variety that will draw most newcomers in. Your version of MP will align closely with longtime friend and brand manager Ricky, as you select agents, navigate social media scandals, and broaden your MyCareer outside of the court and game of basketball. Want to focus on being a fashion guru? You got it. Want to follow in the footsteps of ‘Dame Dolla’ and start a rap career? It’s all here in NBA 2K22. While these extracurricular activities rarely extend beyond a few fetch quests and silly cutscenes, it’s a nice inclusion given many of the conversations and choices touch on life outside of the NBA and what it means to be not only an athlete, but a celebrity with heightened consequences for your actions. It’s not necessary to partake in any of this, as you can simply tear through match after match in pursuit of better stats as you level up your MP, but I can appreciate this sense of depth, scope and variety.

Unfortunately, the MyCareer mode falls victim to a few pitfalls that have plagued the series for many years now. As your performance within games is based on the same grading system seen in previous iterations, you are too often penalised for things that are ultimately out of your control. For example, your player can be assigned to guard a specific opponent, but when faced with a screen, you choose to fight over it and follow your assigned player. Randomly, this assigned player them becomes switched with the player who screened you, as they run off to the other side of the court, is now unattended and open. This is when you are smacked with hefty ‘leave defensive assignment’ and ‘defensive breakdown’ penalties which hurt your performance grade and aren’t really your fault. It’s not a huge issue, but one that has remained long enough to finally frustrate me to the point of mentioning it here. 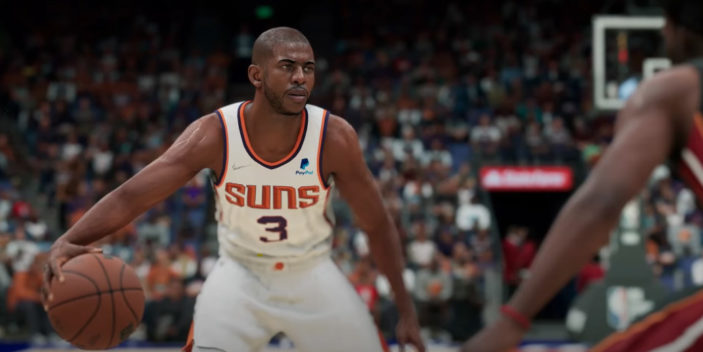 Aside from a beefier MyCareer mode, most modes remain relatively unchanged. Taking over an entire NBA franchise with the MyNBA mode now allows you to choose and assign coaching and front office staff to better suit the needs and goals of your team, which I found never affected the court on such a meaningful level. The W allows you to experience a career through the ranks of the WNBA, but feels incredibly bare bones compared to the main MyCareer, stripping any personality that The City had and confining such goals and strategies to basic menus. MyTeam however is a mixed bag. While some aspects have seen a facelift, such as the increased frequency of rewards and card packs, on top of the ever evolving and themed seasons, MyTeam Online is now The 100, which tacks on too many penalties for losses and points scored against you, holding you back from some of the sweeter rewards. In saying that, The Draft mode in MyTeam allows players to dive in with the greatest sense of depth, choice and customisation as you create your squads, but falls victim to micro-transactions once you run out of the initial tickets required to partake in such a mode. This is flat out inexcusable, and reinforces the overall grind that MyTeam has become in recent years.

In many ways, NBA 2K22 is a major improvement over last year’s mixed bag, improving on areas of concern rather than redefining the structure at this point. Gameplay is much smoother and satisfying, while the new stamina and shooting mechanics won me over in minutes. Defensive plays now feel more organic, and time on the court feels better than it has in quite a few years. The expanded City and MyCareer modes prove that there’s plenty more to build upon, even if some returning modes like The W prove to be a little undercooked at this point in the franchise. While MyTeam has taken significant steps in recent years, for many it can divulge into the micro-transaction minefield it has been notorious for, even if freebies are dished out on a more frequent basis. If you’re a fan of the franchise, you’ll more than likely appreciate these steps forward and I hope to see you on the virtual courts soon.